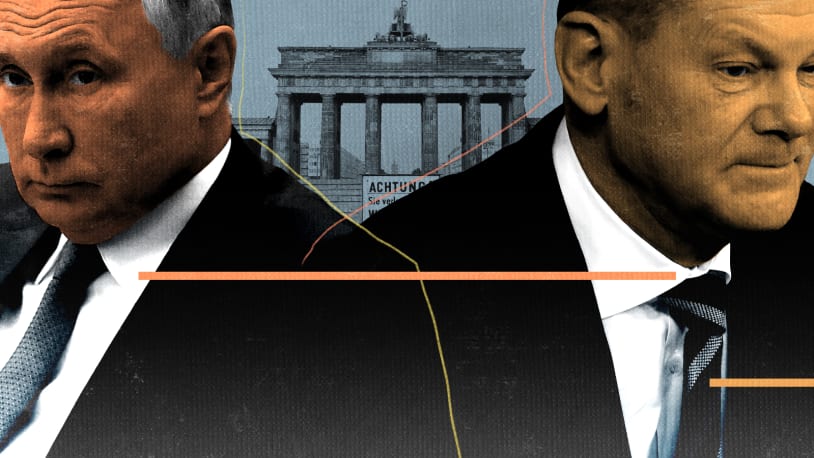 Germany has long had a Russia problem.

Even before their unification under the Hohenzollerns in 1870, German principalities struggled to deal with their giant neighbor to the east. In 1863, at the beginning of his long stint in power, the legendary statesman Otto von Bismarck quipped, “The secret of politics? Make a good treaty with Russia.” But despite interludes of stability, Germany hasn’t quite figured out how to make its agreements, both formal and informal, stick.

Now, time may be running out. In his inaugural address to the Bundestag on Monday, Chancellor Olaf Scholz took up the Russian problem once again. Faced with a buildup of Russian forces along Ukraine’s border, Scholz warned invasion would come at a “high price.” Yet he welcomed “constructive dialogue,” and, echoing statements from his campaign, called for a “new Ostpolitik,” an allusion to the rapprochement between West Germany and the communist East.

Yet even if Scholz’s plan succeeds in calming the present crisis, the absence of a coherent overall policy makes another one inevitable. Germany may hope to muddle through, neither conceding the former Soviet sphere of influence to Russia nor imposing painful economic and perhaps military consequences. But Putin’s ambitions won’t let them avoid the choice forever.

As with his predecessor Angela Merkel, Scholz’s ambivalence about Russia follows domestic opinion. Polls show Germans overwhelmingly want more co-operative relations between Berlin and Moscow. At the same time, Russian provocations have grown harder to ignore. Beyond the Ukraine situation, Germans were outraged by Russian agents’ 2019 murder of a former Chechen fighter in Berlin. Just this week, German Foreign Minister Annalena Baerbock announced the expulsion of two Russian diplomats as punishment for that offense.

Despite their hopes for a middle way, Scholz and the German public need to decide what they’re willing to tolerate from Russia — and what they can hope to prevent. As the Rolling Stones taught us, you can’t always get what you want.

Russia looms larger in the German mind than most Americans realize. In a timely new book, British researcher John Lough shows how connected the two nations are. On the one hand, German populations and influences played a disproportionate role in the modernization of Russia in the 18th century. On the other, the establishment of a unified German state was partly a response to fears of Russian domination.

More than these relatively distant encounters, Lough argues, present German attitudes toward Russia are defined by World War II and its aftermath. Consistent with the “culture of memory” [Errinerungskultur] that developed in the 1970s, Germans are haunted by guilt for the Nazi invasion of Russia and the crimes committed there. The sense that Germany was in the wrong and needed to make amends helped justify the Ostpolitik pursued by Social Democratic Chancellor Willi Brandt around the same time. Although it was technically limited to relations between East and West Germany, many regard that agenda as a crucial step toward the end of the Cold War. At the same time, Soviet dominance ensured that East Germans became familiar with Russian language and culture. So-called Russenversteher, those who understand Russians, remain influential in German affairs.

Beyond those intertwined histories, the German and Russian economies are also closely linked. Although Russia is not among Germany’s largest trade partners, it is an important market for German exports and major supplier of energy. That’s why Scholz was silent about the planned Nordstream II pipeline in his speech on Monday: Although it’s opposed by Russia hawks and environmentalists, including Baerbock‘s Green Pary, Scholz hasn’t repudiated Merkel’s deference to industry, which benefits from cheap natural gas.

This combination of historical, cultural, and economic factors help explain why Germany was so late to recognize the revival of the Russia problem in the 21st century. A bit like Americans who expected free trade and exposure to Western culture to liberalize China, Germans hoped Russia would inevitably develop toward peaceful cooperation. Again like American relations with China, prominent German figures also enjoyed also strong personal incentives to believe that — including lucrative jobs for German politicians like former chancellor Gerhard Schröder.

Some of that wishful thinking has been dispelled since 2014, when Merkel sharply condemned the Russian annexation of Crimea from Ukraine. The problem is that nothing much has replaced it. Like Merkel, Scholz has expressed his opposition to Russian encroachment on Ukraine as a matter of principle. What he hasn’t done is spell out the consequences he’s willing to impose. In addition to criticism within his coalition, Scholz faces increasing pressure from other European Union members to put Nordstream on the line. All he’s done so far, though, is punt the decision to environmental regulators — increasing gas prices without deterring Russia.

To be fair, the coercive measures at Scholz’s disposal are limited. Despite increased defense spending, German forces remains perilously weak. Germany and its partners can’t expect much military help from the United States, either as the Biden administration has made clear we won’t fight for Ukraine. Nor could we, realistically, given the continuing shift in military personnel and resources toward the Pacific.

With the American presence in Europe receding and German dominance of the European Union reinforced by Brexit, Berlin enjoys more flexibility in choosing its Russia policy than at any time since the end of World War II. Doing so, however, requires a clarity about its goals, resources, and principles that German politicians are no longer accustomed to pursue. In seeking inspiration for a new Ostpolitik, Scholz could do worse than asking what Bismarck would do. But Olaf Scholz is no Bismarck.

Germany has long had a Russia problem. Even before their unification under the Hohenzollerns in 1870, German principalities struggled to deal with their giant neighbor to the east. In 1863, at the beginning of his long stint in power, the legendary statesman Otto von Bismarck quipped, “The secret of politics? Make a good treaty with Russia.” But…

Germany has long had a Russia problem. Even before their unification under the Hohenzollerns in 1870, German principalities struggled to deal with their giant neighbor to the east. In 1863, at the beginning of his long stint in power, the legendary statesman Otto von Bismarck quipped, “The secret of politics? Make a good treaty with Russia.” But…