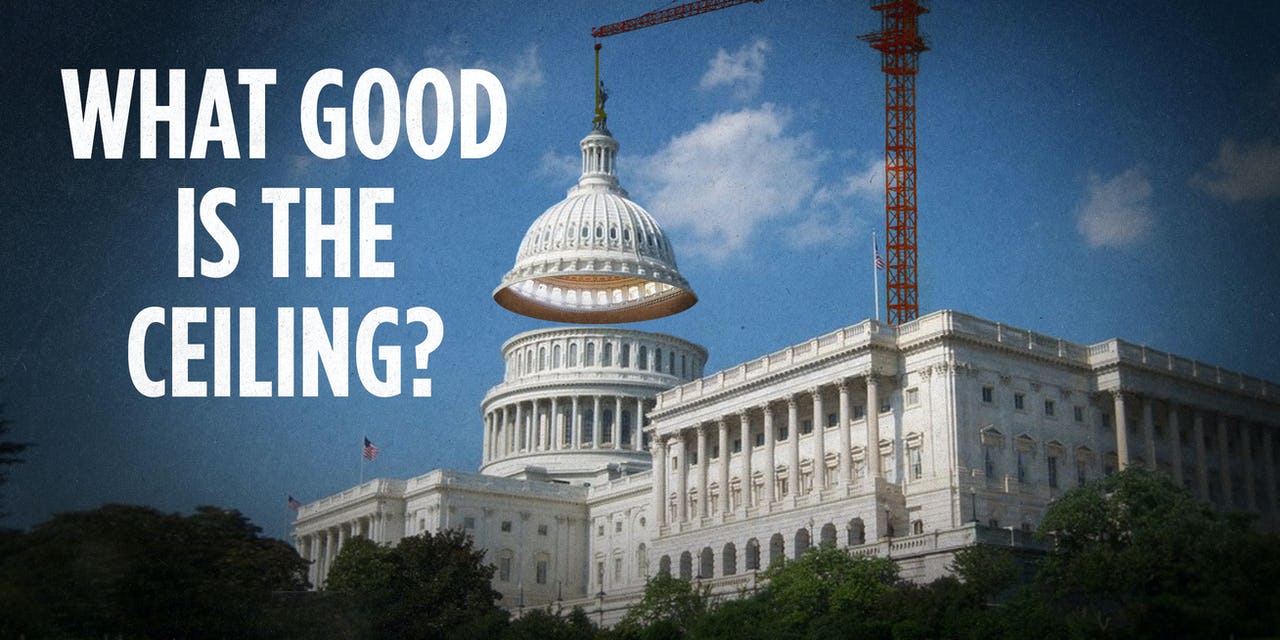 Get Rid of the Debt Ceiling

Threatening existential crisis every now and then benefits only Democrats who want to spend more.

Congress passed legislation this week to raise America’s debt ceiling by $2.5 trillion, and it was signed by President Joe Biden.

Meanwhile, millions of Americans are heading into the holiday season with personal debt. Chances are it will increase after maxing out credit cards for more expensive Christmas presents. But imagine a card with an unlimited line of credit. Who would feel compelled to spend money wisely if they could just keep borrowing while letting someone else worry about it later?

For politicians on Capitol Hill, that’s a luxury they already have. The only difference is that every time members of Congress kick the national debt can down the road, it has a ripple effect on our national economy, the value of the dollar, and the burden our children will carry for decades to come.

That burden is now an unbelievable $572,000 per person, according to The Hill.

Nero fiddled while Rome burned to the ground; Democrats and Republicans celebrate themselves whenever they avert a government shutdown, unfazed by the long-term harm they’re causing.

“Lawmakers pat themselves on the back for averting a crisis — Treasury Security Janet Yellen warned the nation could hit the fiscal limit Dec. 15 — but this short-term fix ignores America’s unhealthy debt addiction,” according to policy analyst Carrie Sheffield. “It’s the kind that overstretches and destroys superpowers. We borrow like there’s no tomorrow.”

Unfortunately, we can’t lay the blame solely at the feet of the Democrats. Republicans, even those who market themselves as fiscal conservatives, have contributed to this looming crisis.

“Legislators from both parties have already authorized trillions in spending, knowing full well the country’s dismal fiscal situation,” writes Michael Dahlberg. “So before skipping town for their holiday break, perhaps Congress should consider leaving one more present under America’s Christmas tree — an end to the debt ceiling.”

Dahlberg adds, “If getting rid of the statutory debt limit sounds like a liberal fantasy, that’s fair. But I’m having trouble understanding the conservative argument for keeping it.”

For decades, Republicans have feared the backlash over a government shutdown. During the rare moments when the GOP had the courage to play political chicken, it was Republicans who chickened out. All it takes to make Republicans weak-kneed and bring them back to the negotiating table is a few DNC ads claiming veterans will starve and national parks will close. Throw in the threat of a Standard & Poor’s downgrade of America’s credit, as it did in 2011, and it’s no wonder Democrats win on this issue every time.

Certainly, these political risks are real, but do our so-called representatives in Washington ever consider the risks of $30 trillion in debt?

Fiscal conservatives who don’t have an issue with the debt ceiling claim it gives them political leverage to demand cuts in spending, but when has that approach ever worked? “The debt ceiling did provide great leverage for fiscal conservatives to demand spending cuts,” admitted the Brookings Institution’s Philip Wallach back in 2011. “But they have drawn the wrong lesson. The debt ceiling has provided occasions for anti-debt speechifying for decades, and these moments have almost never yielded lasting budget change.”

One Republican senator had the courage to vote “no.” But most Republicans caved, even though 49 senators pledged to vote against raising the debt limit back in August.

Now, the debt is soaring and we’re hearing the worn-out clichés about why it was necessary to raise the debt ceiling to avoid a government shutdown, to protect Social Security, or to save democracy.

Instead of replaying the same charade every year, maybe the only one real way to rein in government spending is to elect fiscal conservatives to majorities in the House and Senate. Not your run-of-the-mill Republicans-in-name-only, but real Patriots willing to starve the Leviathan of Big Government and give hope to our children.

That chance will come again next November.

By BRIAN MARK WEBER December 17, 2021 in Government Threatening existential crisis every now and then benefits only Democrats who want to spend more. Congress passed legislation this week to raise America’s debt ceiling by $2.5 trillion, and it was signed by President Joe Biden. Meanwhile, millions of Americans are heading into the holiday season with personal…

By BRIAN MARK WEBER December 17, 2021 in Government Threatening existential crisis every now and then benefits only Democrats who want to spend more. Congress passed legislation this week to raise America’s debt ceiling by $2.5 trillion, and it was signed by President Joe Biden. Meanwhile, millions of Americans are heading into the holiday season with personal…