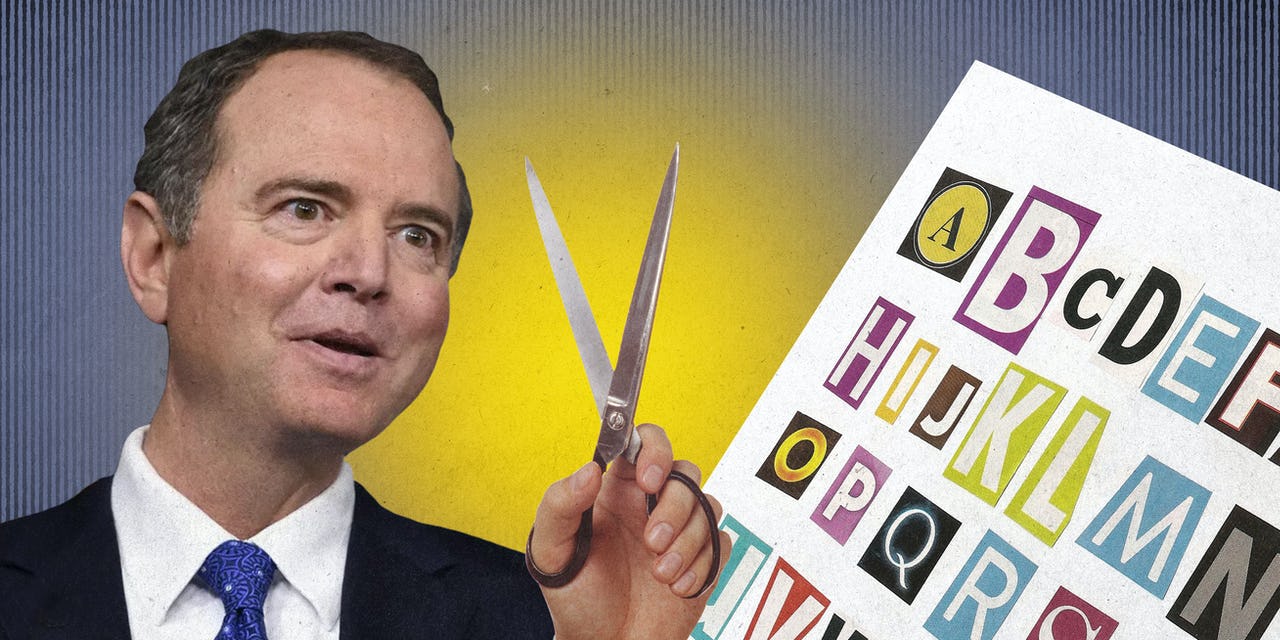 By THOMAS GALLATIN December 17, 2021 in Politics

This man should be a thriller novelist with the amount of fiction he produces. A Democrat representative from California, Adam Schiff just happens to be a member of House Speaker Nancy Pelosi’s “bipartisan” January 6 Committee, and it’s clear his presence on the team is to fabricate “evidence” in support of the Democrats’ latest anti-Trump charade.

With super-serious consternation for maximum effect, Schiff presented his most recent “evidence” against Donald Trump. “I want to display just a few of the message[s] he received from people in Congress,” Schiff announced. “The committee is not naming these lawmakers at this time as our investigation is ongoing. If we could cue the first graphic.”

Schiff then revealed a supposed verbatim text message from Representative Mark Meadows, who at that time was serving as Trump’s chief of staff. The text reads as follows: “On January 6, 2021, Vice President Mike Pence, as President of the Senate, should call out all electoral votes that he believes are unconstitutional as no electoral votes at all.” Schiff then asserted, “You can see why this is so critical to ask Mr. Meadows about. About a lawmaker suggesting that the former vice president simply throw out votes that he unilaterally deems unconstitutional in order to overturn a presidential election and subvert the will of the American people.”

The problem is that what Schiff presented as the damning text message, which he then used to condemn a fellow lawmaker as having pressed for a blatantly unconstitutional act to “subvert the will of the American people,” is not the actual text message at all — it’s a doctored and heavily edited summation by Schiff himself. It was an edited version of the much longer text message Meadows received from Congressman Jim Jordan (R-OH) on the evening of January 5, 2021. In fact, Schiff went so far as to add content to the message that was never there in the first place.

On a side note, this piece of doctored “evidence” offers at least one explanation as to why Pelosi broke House rules by refusing to allow Jordan to be included as a member of her J6 “investigation” committee. But we digress.

Back to the text message in question. Jordan was sharing a portion of text from a draft document that was written by Washington attorney and former Department of Defense Inspector General Joseph Schmitz, who was arguing what in his opinion gave Pence the constitutional authority to object to certifying electoral votes from certain states. In sending the text to Meadows, Jordan also included the message, “Good luck tomorrow!”

In other words, Jordan and Meadows were discussing what legal options existed for arguing for halting the certification of the electors’ votes. This was not some plan for a coup, nor was it evidence that Meadows was conspiring on Trump’s behalf to initiate an “insurrection” or riot, nor was it any other illegal activity. But of course facts and truth don’t amount to a hill of beans for Schiff and the Trump-deranged Democrats.

A spokesman for Jordan, Russell Dye, responded to Schiff’s doctored accusations with a question: “Is anyone surprised that Adam Schiff is again rifling through private text messages and cherry-picking information to fit his partisan narrative and sow disinformation?”

As he did with the Democrats’ first impeachment charade of Trump over a benign phone call with the president of Ukraine, Schiff is simply making stuff up and trying to sell it to the American people as substantive evidence from an investigation into corruption. The only real corruption here is coming from those running this sham investigation.

By THOMAS GALLATIN December 17, 2021 in Politics Pelosi’s J6 Committee is a sham. Schiff presents doctored text messages as “evidence.” This man should be a thriller novelist with the amount of fiction he produces. A Democrat representative from California, Adam Schiff just happens to be a member of House Speaker Nancy Pelosi’s “bipartisan” January…

By THOMAS GALLATIN December 17, 2021 in Politics Pelosi’s J6 Committee is a sham. Schiff presents doctored text messages as “evidence.” This man should be a thriller novelist with the amount of fiction he produces. A Democrat representative from California, Adam Schiff just happens to be a member of House Speaker Nancy Pelosi’s “bipartisan” January…

Sunday Newfeed: Those Little Specks of Unidentifiable Whatnots You Bite into Even When You’ve Watched the Sausage Being Made