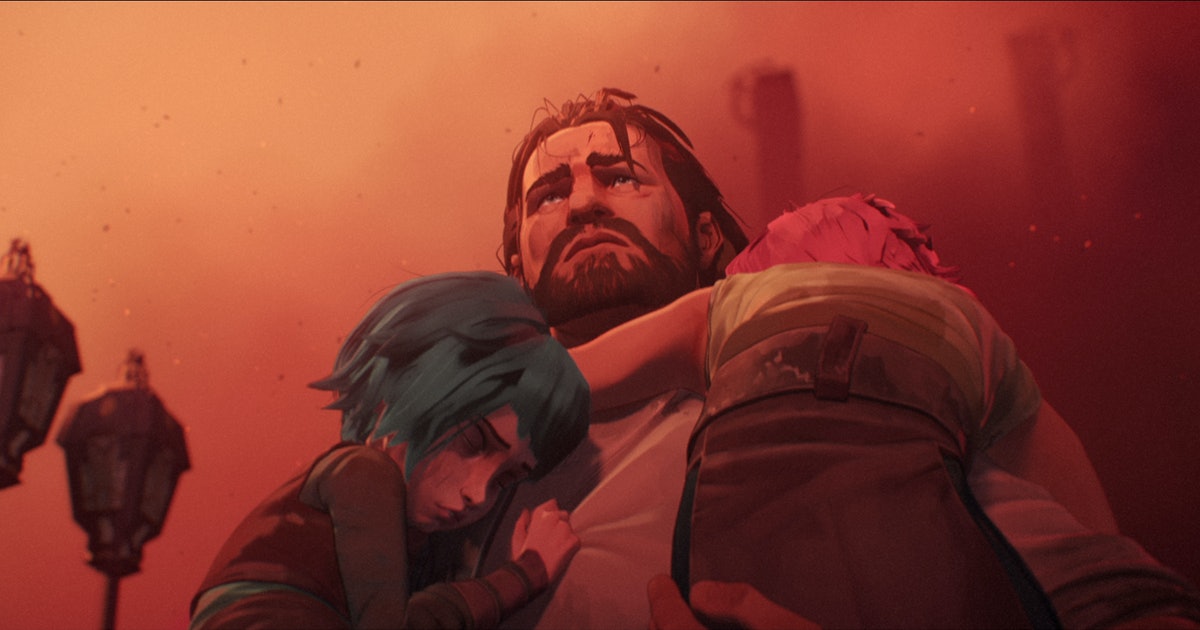 ‘Arcane’s best character could be the future of Netflix animation

Vander’s two adoptive sons are dead. One of his daughters cries in pain next to him, and he doesn’t even know that his other daughter is the one that caused all of this destruction and death. At that moment, he blames the evil crime lord Silco and his attempts to destroy the unstable peace between Piltover and Zaun.

But in reality, this is all Vander’s fault.

The first three episodes of Arcane, an animated series on Netflix based on the video game League of Legends, focus on establishing the sibling bond between Vi, Powder, and their father Vander. He only wants what’s best for his kids, but makes crucial mistakes that doom his children to a life even rougher than his own. This all comes to a head in Episode 3, “The Base Violence Necessary for Change.”

SCENE STEALERS is a countdown that salutes the unforgettable small-screen characters of the year. Vander is #20.

Following that crushing blow, we’re graced with one of Arcane’s most brutal scenes. Vander attacks Silco and his remaining goons and even manages to get to the villain himself, but can’t bring himself to kill anyone else. He’s defeated, injects a drug to save Vi, and then succumbs to his wounds. He thought his actions would protect his family and give his adoptive children a better life than he ever had. In reality, Vander’s arc in Arcane demonstrates how a family can sometimes fail each other, even when they try their hardest not to. While he isn’t in a lot of the show, Vander is one of Arcane’s most tragic characters. And we need to see more of him.

Veteran actor and voice director JB Blanc, who has been involved with League of Legends’ many productions including the main game and spin-off Legends of Runeterra, is the voice behind Vander. Blanc’s work affords him deep familiarity with the world Arcane takes place in, which is why he knew precisely what to bring to this standout performance. In a show full of great voice acting — especially in a medium reliant on fantastic voicework to get emotion across — he balances the gruffness and toughness of a father with love and compassion.

However, Vander’s overprotectiveness leads to his downfall and causes more conflict for his children. Long before his sacrifice, Vander already proved that he would give his life for his adoptive children. As the de-facto leader of Zaun, Vander had to balance keeping a tough, Piltover-hating exterior while actually making deals with its leaders and stifling attempts for Zaun to fight back. He was so concerned with preventing the regions of Piltover and Zaun from fighting and ruining his adoptive children’s lives again that he played a crucial role in creating an uneasy peace that would never last.

While Vander’s brutal final sacrifice seemed like a suitable endpoint for his character, we haven’t seen the last of him. The final episode of Arcane Season 1 teased that a prevalent fan theory is true: Vander is Warwick, another League of Legends Champion. In the season’s final montage, we see the evil scientist Singed working in a lab with Vander hanging in the background, now partially turned into Warwick.

Within League of Legends lore, Warwick had a vague backstory. We knew he was an alchemist from Zuan resident with a troubled past that was ultimately transformed into a werewolf-like monster by the evil scientist Singed. While previous lore made Warwick inherently nefarious, Arcane retcons that and adds more nuance and tragedy to his backstory.

We’ll likely see Warwick show up in Arcane Season 2, but he could support a show of his own. Imagine a show called Warwick or Vander that dives into his backstory and establishes why he betrayed Silco and why he was so scared of a repeated conflict between Piltover and Zaun. The werewolf angle would lend itself to some gruesome body horror animation and a lot more personal and focused plot than Arcane.

Arcane is about the successes and failures of blood and found family. While Vander’s approach initially seems successful, his overprotectiveness leads to unpredictable, chaotic results that change Piltover and Zaun forever. Vander had a good heart and fought for his family when it mattered, but he ended up playing a part in causing what tore his family apart.

Stories about family are eternally relevant, and they’re not always happy. Found family is at the core of Arcane, and Blanc’s performance of Vander serves as a noble but cautionary tale about how it is important to care and fight for those closest to you — even if you can also do so to a fault.

Arcane is streaming now on Netflix.

Vander’s two adoptive sons are dead. One of his daughters cries in pain next to him, and he doesn’t even know that his other daughter is the one that caused all of this destruction and death. At that moment, he blames the evil crime lord Silco and his attempts to destroy the unstable peace between…

Vander’s two adoptive sons are dead. One of his daughters cries in pain next to him, and he doesn’t even know that his other daughter is the one that caused all of this destruction and death. At that moment, he blames the evil crime lord Silco and his attempts to destroy the unstable peace between…

25 years ago, Tim Burton made a sci-fi classic that almost ruined his career