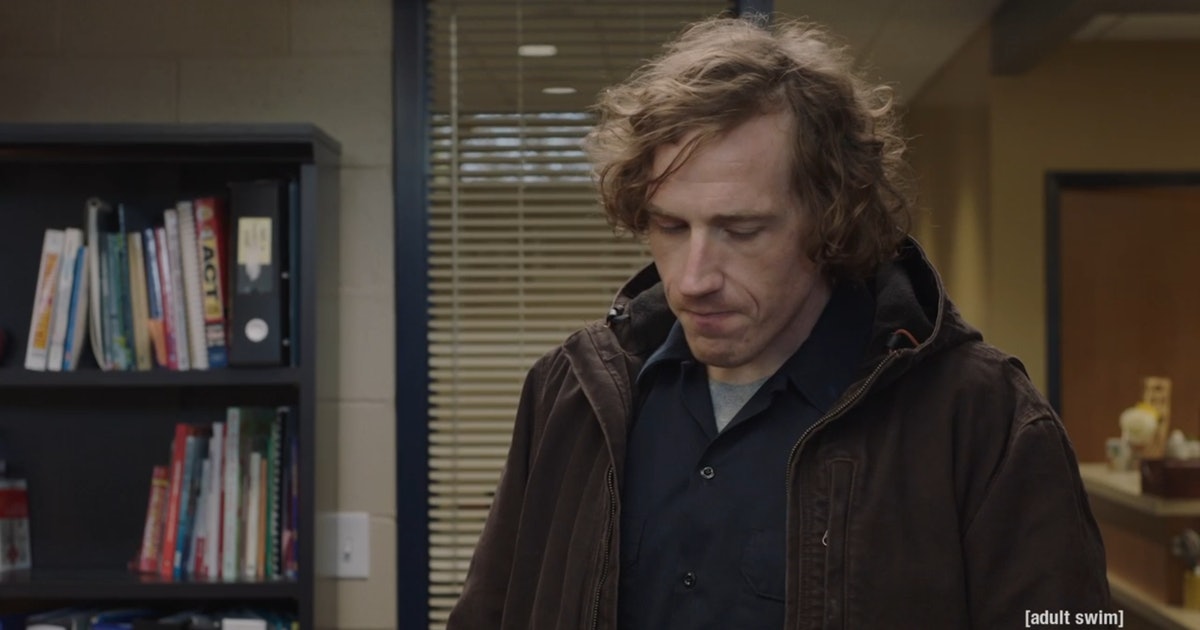 A dweeby teacher hauls a rebellious student into the principal’s office. Her crime? Eating chips in class. Calling teachers “bullshit.” You know, suspension stuff. But when the student’s parents enter, the teacher wishes he could take it all back.

Barreling in, pissed at the world, the father belts out: “This one has had a real piss-poor attitude lately, hasn’t she?” He blames Odd Future and decries, “No more Spotify Premium until you start acting like a good kid.”

He threatens to break the principal’s computer with his head, and his daughter winces while his wife alludes to a DUI. When he learns his daughter swore in class, he insists they don’t “condone that kind of language” and proposes at-home narcotics testing and/or military school.

SCENE STEALERS is a countdown that salutes the unforgettable small-screen characters of the year. Mike Melsky is #21.

He’s a mess. He’s chaotic. He’s captivating and frenzied and way over the top. He’s Mike Melsky, played by cringe comedy king Conner O’Malley in Season 3 of Joe Pera Talks With You. Starring comedian Joe Pera as a fictionalized version of himself — an awkward, thoughtful, and slow-paced man in a fast-moving world — O’Malley serves as Pera’s opposite. And in the Season 3 episode “Joe Pera Shows You His Second Fridge,” Mike Melsky isn’t pleasant to watch, but like a snowmobiling accident in the Northern Woods, you can’t look away.

O’Malley announced himself to the world with a manic yell on the short-lived platform Vine. While he came up in the Chicago improv scene, he took to Vine as a hobby while working as a dog-walker in New York City. O’Malley doesn’t speak in the videos so much as bark in unhinged shouts. That’s most of O’Malley’s comedic presence: chaos and id, seasoned with broken masculinity. His subsequent YouTube videos are paranoid and conspiratorial, and his acting roles are often minor but no less memorable, like in the cult Netflix show I Think You Should Leave and Late Night with Seth Meyers, where he was also an award-nominated writer.

O’Malley’s comedic style informs the energy of Mike Melski, a force for chaos in the show’s first two seasons. In the second episode, Mike has a meltdown in a diner after he fails to construct “the perfect egg bite.” “I need a win,” he shouts while his family looks on in angst. “Things aren’t going well for me.” A later episode finds Mike’s wife, Sue Melsky — played with a perfect amount of exhaustion by Jo Scott — in the grocery store, reporting her husband has taken to eating whole chickens “like a goddamn raccoon” in the shower on the advice of The Joe Rogan Experience.

Difficult as it is to witness Mike Melsky, he still commands a repulsive sense of awe. By the end of the same episode with the principal’s office, Mike shows Joe Ring security footage of teens stealing beer from his garage fridge. To Joe, it’s just beer. Those teens raided his garage fridge, too. (If you’re from the Midwest, you know this fridge all too well.) But Mike hopes he can “put those pigs in Guantanamo Bay.” It’s not until Joe advises to give them leeway, leading Mike to concede that Joe is right about his daughter’s woes — she needs her own space.

While other essays in this series advocate for a spin-off for their subject, I’m not sure I can. Or should. We have many aggro man-child shows already, also on Adult Swim. The satire coded in Mike Melski’s DNA may be lost on the more frightening ends of Rick and Morty fandom. In a show dominated by a character with mannerisms from another era, Mike is the one most tapped into our zeitgeist of fragile, angry wounded-animal masculinity. When Mike is on the screen, it becomes his show anyway for however long it lasts. While his role this season is less impactful than seasons past, it’s no less effective in illustrating the polarizing spectrum between passive Joe and chaotic Mike.

Sure, Mike Melsky seems exaggerated. But we live in a world where men don’t wipe their ass because it’s “gay” to touch between the cheeks, so how far from reality can it be? Mike is hardly a candidate for father of the year, even if there are flashes of growth. In the season finale, a more sedate Mike announces he’s regained his license and aims to take the family for a pleasant drive. But most times, he’s a human cautionary video in a court-ordered anger management class. Connor O’Malley is the perfect conduit for Mike Melsky, whose antics are immature and whose rash decisions radiate to the rest of the family like nuclear fallout.

Joe Pera Talks With You is streaming now on HBO Max.

A dweeby teacher hauls a rebellious student into the principal’s office. Her crime? Eating chips in class. Calling teachers “bullshit.” You know, suspension stuff. But when the student’s parents enter, the teacher wishes he could take it all back. Barreling in, pissed at the world, the father belts out: “This one has had a real…

A dweeby teacher hauls a rebellious student into the principal’s office. Her crime? Eating chips in class. Calling teachers “bullshit.” You know, suspension stuff. But when the student’s parents enter, the teacher wishes he could take it all back. Barreling in, pissed at the world, the father belts out: “This one has had a real…