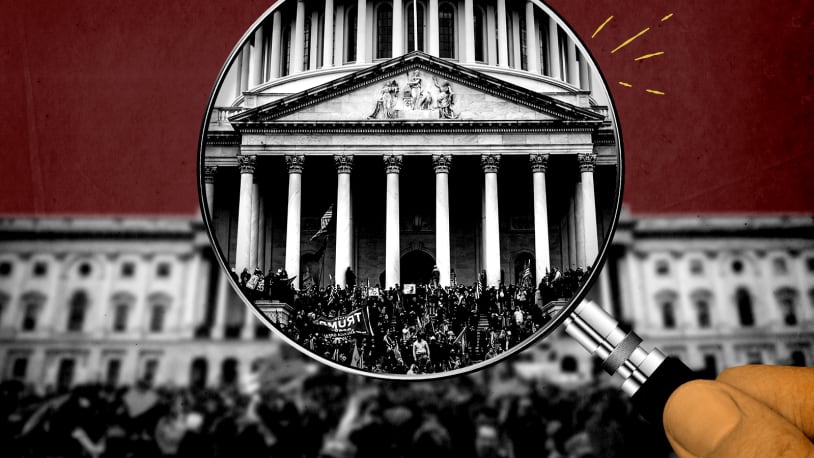 It’s getting worse. While the basic storyline holds true, new information revealed by the House committee investigating the Jan. 6 riot deepens our understanding of the final weeks of the Trump presidency. In its report recommending contempt of Congress charges against Chief of Staff Mark Meadows, the select committee details a frenzied atmosphere in which the administration and its supporters in Congress were searching for the slightest evidentiary or procedural pretext to prevent the inauguration of Joe Biden.

The documents Meadows provided don’t prove a fully formulated conspiracy — and some suggest insiders were genuinely surprised by the violence. Still, the findings add to a damning picture of an administration determined to avoid giving up power, even through constitutional theories most conservative scholars find bizarre. It’s not clear, though, whether the public agrees that it was such a big deal. The issue barely registers on polls of the most important issues facing the country, which include the pandemic, economy, and immigration. If anyone’s fired up, paradoxically, it’s voters who think Trump really won. Unable to “stop the steal” in 2020, they see upcoming elections as an opportunity for revenge.

Some critics blame the media for not pushing the story. Yet reporting on White House interventions in the voting and certification process has been a staple of liberal platforms for the last year. It’s true also that conservative outlets have minimized or evaded the issue. While it’s credited with overwhelming influence, though, even Fox News reaches an average of just 1.5 million viewers. In any case, more coverage doesn’t necessarily lead to greater attention; research suggests that audiences tune out news they don’t want to hear.

Insufficient or misleading coverage probably isn’t the main reason ordinary Americans haven’t responded with the outrage one might expect. Instead, the story of Jan. 6 and preparatory efforts run up against some basic tendencies in political psychology.

First of all, it’s abstract. Voters tend to care most about issues that directly affect their lives. That doesn’t mean they’re relentless calculators of economic interest. But they do want to know how the things talking heads argue about on TV matter to them. Lacking a direct connection to the experience of people faced with very real problems, it’s easy to dismiss the case against Trump and his enablers as irrelevant partisan wrangling. Remember: Most Americans don’t like politics and pay attention only to the extent they feel they must.

You can argue that few things matter more than the legitimacy of elections — which depends partly on losers’ willingness to accept unfavorable results. Yet the most serious charges revolve around a counter-factual. The White House could have directed the Justice Department to investigate state vote counts, derailed certification of the electoral college, or even deployed the military. The administration ultimately didn’t do these things, though, partly because even members of Trump’s circle blanched at some of the more radical ideas for remaining in office. It may be a moral scandal that they even contemplated such things, but it’s not necessarily a political one.

Third, voters have short memories. In other words, they tend to respond to recent events, while discounting more distant information. To political professionals and the obsessively engaged, the year that’s passed since the presidential election seems like the blink of an eye. To many voters, it’s an eternity — particularly when the year has been as challenging as 2021. That’s why campaigns try to release scandalous information as close to the election as possible; if stories break too far in advance, voters tend to forget or discount them.

Finally, though, the events of last year have to be understood against the background of collapsing trust in political institutions. Leading political figures, including prominent Democrats, have been challenging election outcomes as rigged or fraudulent for years —not least in 2016. More generally, confidence that the government is competent, well-intentioned, and truthful has never recovered from the sharp decline that began during the 1960s. And while American commentators tend to treat our pathologies as sui generis, similar trends can be observed abroad.

A worldwide crisis of legitimacy explains why comparisons to Watergate are misleading. Although trust in government was already headed sharply downward, Richard Nixon’s machinations were revealed to a public that still expected presidents to meet a higher (and arguably unrealistic) standard. That made them shocking in a way they couldn’t be today. If you already think politicians are deeply corrupt, you won’t be surprised by evidence that your suspicions are correct. On the contrary, it might even be attractive. Part of Trump’s appeal was his promise to fight dirty on behalf of his supporters, rather than against them.

To describe these tendencies isn’t to endorse them. Like many other journalists, academics, and upper-middle-class good-government types, I wish more people cared about processes and institutions. But the fact is, they don’t. That’s why Senate Republicans refused to try and convict Trump during the brief period in early January when it might have been possible. They correctly intuited that they — and the party — would be punished by voters for betraying their leader.

As my colleague Damon Linker has argued, Democrats don’t escape blame. Rather than pursuing an immediate fix to the Electoral Count Act, which might have attracted some Republican support and headed off more possibilities for mischief, they pinned their hopes on a DOA wishlist of partisan aspirations. The Jan. 6 select committee has also been proceeding slowly and in ways that seem calculated to provoke resistance from witnesses — including Meadows, who’d initially agreed to cooperate. One possible reason is that the committee members, who also know something about how voters think, aim to maximize the impact by releasing their reports as close as possible to the midterm elections. The Democratic leadership may also be trying to set up a showdown around the filibuster, which stands in the way of their preferred electoral reforms.

The ambiguity of Trump’s political future helps neutralize the issue, too. As long as he’s not officially running for president, he can concentrate on settling scores within the party while less-engaged voters aren’t paying attention. Once he declares, as seems inevitable, it will be harder to avoid a public accounting of what he did and didn’t do between Nov. 4 and Jan. 7, 2021. This story isn’t over yet.

It’s getting worse. While the basic storyline holds true, new information revealed by the House committee investigating the Jan. 6 riot deepens our understanding of the final weeks of the Trump presidency. In its report recommending contempt of Congress charges against Chief of Staff Mark Meadows, the select committee details a frenzied atmosphere in which…

It’s getting worse. While the basic storyline holds true, new information revealed by the House committee investigating the Jan. 6 riot deepens our understanding of the final weeks of the Trump presidency. In its report recommending contempt of Congress charges against Chief of Staff Mark Meadows, the select committee details a frenzied atmosphere in which…

Americans are dangerously casual about war with Russia and China