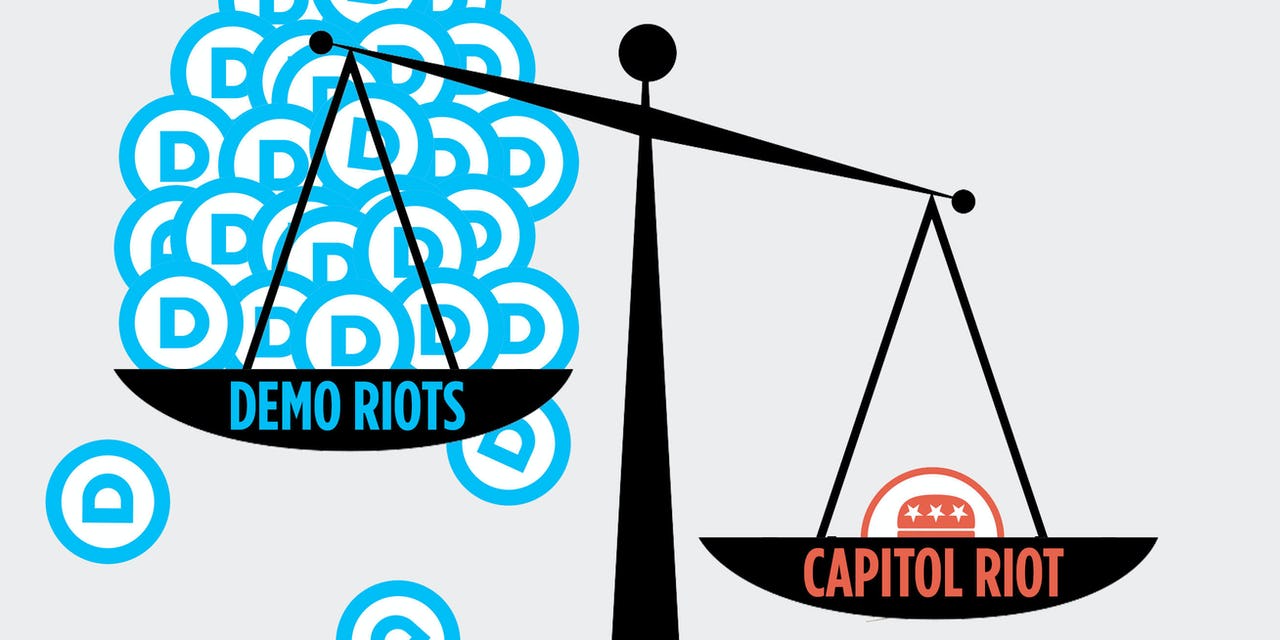 I hate deception, even where the imagination only is concerned. —George Washington (1779)

Get ready for all the Demo drama …

We’re a few weeks away from a massive celebration by the Democrat Party’s rising ranks of socialist authoritarians and their Leftmedia propagandists — a day to remind the American people of the most disgraceful event associated with the Republican Party since the attempted Watergate cover-up.

I am referring, of course, to the Demo fanfare you can expect as we approach the one-year anniversary of the “insurrection,” the January 6th (J6) Capitol riot.

Joe Biden and his leftist cadre of enablers, Kamala Harris, and the Demo tag-team duo of Nancy Pelosi and Chuck Schumer, are hoping the J6 anniversary will be a booster shot for Biden’s now-chronically abysmal approval ratings. Biden will commemorate this “darkest day in our democracy,” but it’s much less dark than his inauguration two weeks later.

We have condemned the rioting J6 jackasses from the moment a split fraction of those attending Donald Trump’s “stolen election” rally staged a brief but ugly occupation of the Capitol.

Given the civil and lawful tenor of ALL previous Trump rallies during his tenure, there was no reason to expect that some of those in attendance that day would resort to the riotous thuggery previously associated with “peaceful protests” by key Demo constituencies — their Black Lives Matter gangsters and antifa goons.

The J6 riot was far less deadly and destructive than any of the more than 550 riots by violent Democrat mobs that besieged our nation for six months prior to the “Capitol insurrection.” It is estimated that there were more than 50 deaths directly associated with those violent riots, 19 in just the first two weeks of the “systemic racism” protests, including several police officers. There were billions of dollars in damages, all while Democrats remained mostly silent if not actively fomenting those riots.

If not for double standards, Democrats would have NO standards.

But the J6 rioters and their protagonists certainly did inflict more damage on the Trump administration’s exceptional policy legacy, and on conservatives generally, than anything Democrats could have hoped to achieve. Those self-aggrandizing thugs managed to defile the standing and reputation of every Liberty-loving and law-abiding conservative across our nation. Their obscene actions demeaned all Americans who supported the Trump administration’s policies over the previous four years.

As for Trump’s rally that preceded the riot, his references to Mike Pence, who stood by Trump through thick and thin, were disgraceful. So was the insinuation that Pence could simply and singlehandedly overturn a presidential election. Unfortunately, that fratricidal condemnation followed a pattern of infamous communications that have undermined Trump’s policy successes.

However, we were far more concerned about what Trump did not say and do as his team was updating him in real time on the Capitol violence.

We now know, as a result of Nancy Pelosi’s histrionic “insurrection” inquisition — a charade to perpetuate the J6 riot damage to the conservative brand — that the real-time information Trump’s Chief of Staff Mark Meadows was receiving will be used to indict Trump’s inaction.

To that end, Pelosi’s patsy, Rep. Liz Cheney (“R”-WY), read a series of distressed text messages to Meadows for the record in committee hearings this week. According to Cheney: “These text messages leave no doubt. The White House knew exactly what was happening here at the Capitol. Members of Congress, the press, and others wrote to Mark Meadows as the attack was underway.”

Among those messages were some from members of Congress. One read, “Mark, protesters are literally storming the Capitol.” Another followed: “Breaking windows on doors. Rushing in. Is Trump going to say something?”

Most notably, there was this urgent message from Donald Trump Jr.: “He’s got to condemn this s**t ASAP. … We need an Oval Office address. He has to lead now. It has gone too far and gotten out of hand.”

There was also a trio of messages from Fox News influencers.

“Can he make a statement?” asked Sean Hannity of Meadows “Ask people to leave the Capitol.”

“Please, get him on TV,” implored Brian Kilmeade. “Destroying everything you have accomplished.”

Laura Ingraham also weighed in with urgency: “Mark, the president needs to tell people in the Capitol to go home. This is hurting all of us. He is destroying his legacy.”

Ingraham is taking heat because she opened her Fox News program following the riot by saying: “This is the ‘Ingraham Angle’ from a chaotic Washington tonight. Earlier today, the Capitol was under siege by people who can only be described as antithetical to the MAGA movement. Now they were likely not all Trump supporters, and there are some reports that antifa sympathizers may have been sprinkled throughout the crowd. We’ll have more on that later. But the point remains, if you were a Trump supporter hoping to display your support for the president, well, today’s antics at the Capitol did just the opposite. There are legitimate concerns about how these elections were conducted and in the middle of a pandemic with all the new restrictions, but that never should have lent any license to violence or other chaos.”

“Antifa”? Maybe. But clearly what Ingraham said was correct and entirely consistent with her text to Meadows earlier in the day. There were agitators among the protesters who were not Trump supporters, and she concluded, as have we, that the riot undermined everything Trump and his supporters had achieved.

In rebuttal, Ingram said correctly: “The regime media is trying to twist this message to tar me as a liar … to smear me as some Jan. 6 denier. The real big lie is the expansive narrative of Jan. 6 that these clowns have made the center of their political existence.”

Indeed they have. The haters can’t let it go.

Unfortunately, it was more than three hours after the violence started when Trump finally delivered a brief statement in which he again made references to the stolen election. But he did conclude by telling protesters: “We love you. You’re very special. You’ve seen what happens. You see the way others are treated that are so bad and so evil. I know how you feel. But go home, and go home in peace.”

But that was much too little and too late to contain the enormous political damage done to his administration’s legacy — and by extension to those who supported him. For the record, regardless of what Trump said or did not say on 06 January, it is the riotous Capitol jackasses, and other fringe elements across the nation that identify with their actions, who are directly to blame.

In the days and weeks that followed, we covered in detail the J6 lies Democrats told about the death of Capitol Police Officer Brian Sicknick, and the unjustifiable shooting of protester Ashli Babbitt by an incompetent USCP officer.

Now, ramping up for the J6 anniversary, and endeavoring to propagate Biden’s “white supremacist” bogeyman, this week the District of Columbia’s attorney general filed suit against the outlier “Proud Boys” and “Oath Keepers” groups alleging they were co-conspirators in the Capitol attack.

Recall that Senate Republicans rejected a “bipartisan” commission investigation after Pelosi rejected Republicans Jim Jordan and Jim Banks as committee members out of fear that they would ask too many tough questions and reveal too many inconvenient truths. Had they acquiesced, the House investigation would have been required to conclude this month. Instead, there is no conclusion in sight. Mitch McConnell calculated that the damage that pretense at bipartisanship would have done would have been greater.

For his part, Meadows is now being held in contempt for claiming executive privilege regarding documents he has not turned over to Pelosi’s cadre.

All said, the Biden/Pelosi J6 narrative should not stand without the full context of that event being exposed.

And again, it is an opportunity to remind the American people that Pelosi and company desecrated the memory of USCP officer Brian Sicknick by lying about how he died, and they continue to prohibit any public investigation of the death of unarmed protester Ashli Babbitt.

P.S. Patriots, the most cost-effective investment you can make to ensure the future of Liberty is to support The Patriot Post. We are the Web’s most influential grassroots journal promoting freedom and challenging the Leftmedia narrative. We rely 100% on the voluntary financial support of Patriots — people like you. Please support The Patriot Fund’s Year-End Campaign today. Thank you.

Join us in prayer for our nation’s Military Patriots standing in harm’s way, for our First Responders, and for their families. Please lift up your Patriot team and our mission to support and defend our Republic’s Founding Principle of Liberty, in order to ignite the fires of freedom in the hearts and minds of our countrymen. Thank you for supporting our nation’s premier online journal of Liberty.

By MARK ALEXANDER December 15, 2021 in Leftist Biden/Harris Regime Rioting Capitol jackasses are fancy fodder for Pelosi’s “insurrection” theater. I hate deception, even where the imagination only is concerned. —George Washington (1779) Get ready for all the Demo drama … We’re a few weeks away from a massive celebration by the Democrat Party’s rising ranks of socialist authoritarians and…

By MARK ALEXANDER December 15, 2021 in Leftist Biden/Harris Regime Rioting Capitol jackasses are fancy fodder for Pelosi’s “insurrection” theater. I hate deception, even where the imagination only is concerned. —George Washington (1779) Get ready for all the Demo drama … We’re a few weeks away from a massive celebration by the Democrat Party’s rising ranks of socialist authoritarians and…