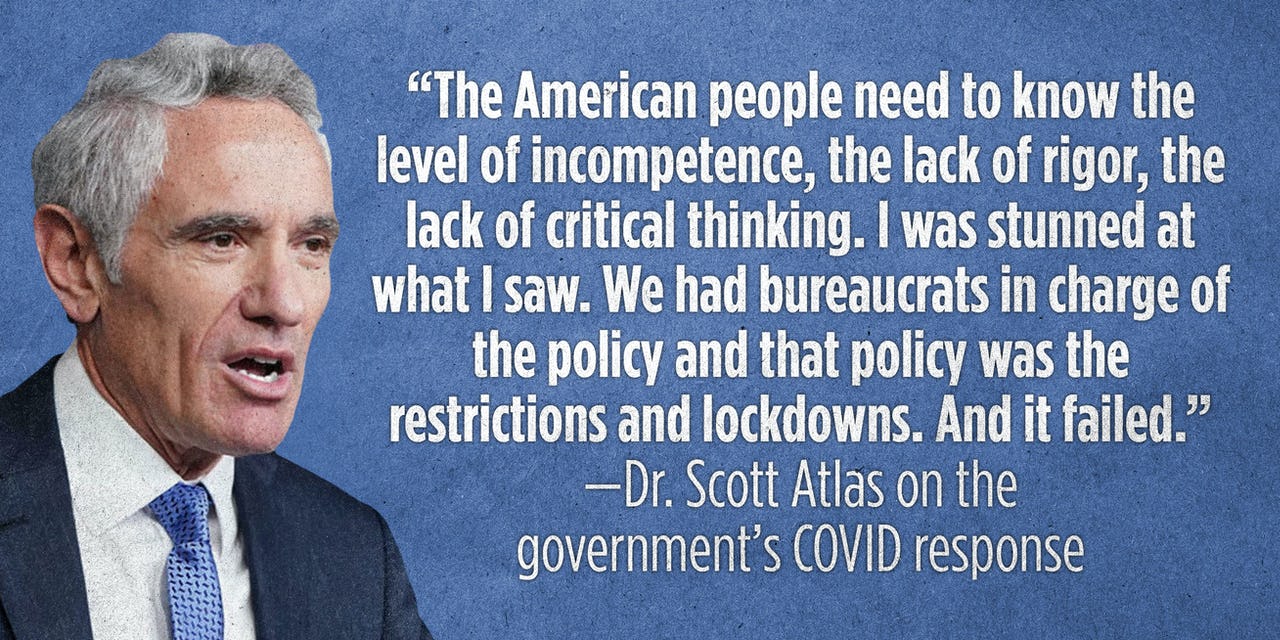 Dr. Scott Atlas, a former adviser to Trump, has a lot to say about national policy and the bureaucrats who ran it off the rails.

It’s easy to criticize, but they’re really criticizing science because I represent science. That’s dangerous. To me, that’s more dangerous than the slings and the arrows that get thrown at me. I’m not going to be around here forever, but science is going to be here forever. And if you damage science, you are doing something very detrimental to society long after I leave. And that’s what I worry about.

So said Dr. Anthony Fauci last month. Fauci, of course, is the man most responsible for U.S. COVID-19 policy and all the miseries associated with it. And what could be more telling of his thin skin, his arrogance, and his desire to silence those who would second-guess him?

Easy there, pal. When you tangle with Tony Fauci, you’re tangling with science.

Not everyone, though, has been cowed into silence by the tiny technocrat — and certainly not Scott Atlas. A Hoover senior fellow and one-time chief of neuroradiology at Stanford Medical Center, Atlas served from August through November 2020 as a special adviser to President Donald Trump and was a member of the White House Coronavirus Task Force. And it’s precisely this public service in support of Joe Biden’s predecessor that has made Atlas a target of the anti-scientific Left and its unhinged cancel culture.

“The American people need to know the level of incompetence, the lack of rigor, the lack of critical thinking,” says Atlas in an interview and podcast with The Daily Signal. “I was stunned at what I saw,” he says of his time in the Trump White House. “We had bureaucrats in charge of the policy and that policy was the restrictions and lockdowns. And it failed.”

“I was asked to help the president in the biggest healthcare crisis in the century,” he says, “and as a health policy expert and a medical scientist for 25 years, and more than a decade of full-time work in health policy, I said yes. It had nothing to do with politics. … I knew the president was despised by a significant proportion of the country, but that didn’t matter. And when I got there, I was under attack by people who were really attacking me out of a political animus toward the president.”

Atlas, whose scholarly and academic credentials are impeccable — or at least were impeccable until he answered Donald Trump’s call to public service — is trying to set the record straight in a new book: A Plague Upon Our House: My Fight at the Trump White House to Stop COVID from Destroying America. Needless to say, it won’t be at all popular with the Left.

As for those all-powerful bureaucrats he mentions, they are Dr. Deborah Birx, White House coronavirus response coordinator; Dr. Robert Redfield, former director of the Centers for Disease Control and Prevention; and, of course, Fauci, the longtime director of the National Institute of Allergy and Infectious Diseases.

“These people were bureaucrats,” he says. “Drs. Fauci and Birx were 40-year bureaucrats. I was very different. I had more than a decade of health policy expertise practicing. I had 25-plus years of medical science clinical research and education. I brought in dozens of papers, the world’s literature.”

Atlas noted that our nation’s coronavirus policy — its hysteria, its restrictions, and its lockdowns — caused many people, out of fear or lack of access, to put their chronic health conditions on the back burner. As a result, these people became sicker than ever. “[The policy] failed by the data to stop the spread of the infection. It failed to protect the elderly and stop them from dying. And it destroyed millions and millions of families, including the children who were sacrificed, and I’m talking about particularly low-income families.”

If you get the impression that Scott Atlas isn’t a fan of Beltway bureaucrats, you’re right. He isn’t. He has a lot to say, and his podcast interview is well worth a listen. And the perspective he presents is much needed, because the history being written about our nation’s response to the COVID-19 pandemic is one-sided. It’s a history that will favor the Left, will favor the bureaucracy, and will reflexively disparage Donald Trump and everyone who worked for him.

“The American public health leaders,” he says, “are the flat-earthers of today.”

By DOUGLAS ANDREWS  December 15, 2021 in Health Dr. Scott Atlas, a former adviser to Trump, has a lot to say about national policy and the bureaucrats who ran it off the rails.  It’s easy to criticize, but they’re really criticizing science because I represent science. That’s dangerous. To me, that’s more dangerous than the…

By DOUGLAS ANDREWS  December 15, 2021 in Health Dr. Scott Atlas, a former adviser to Trump, has a lot to say about national policy and the bureaucrats who ran it off the rails.  It’s easy to criticize, but they’re really criticizing science because I represent science. That’s dangerous. To me, that’s more dangerous than the…

A ‘mild’ COVID-19 case just means you don’t end up in the hospital, epidemiologists caution

Sea spray could be dousing you in toxic “forever chemicals” — study