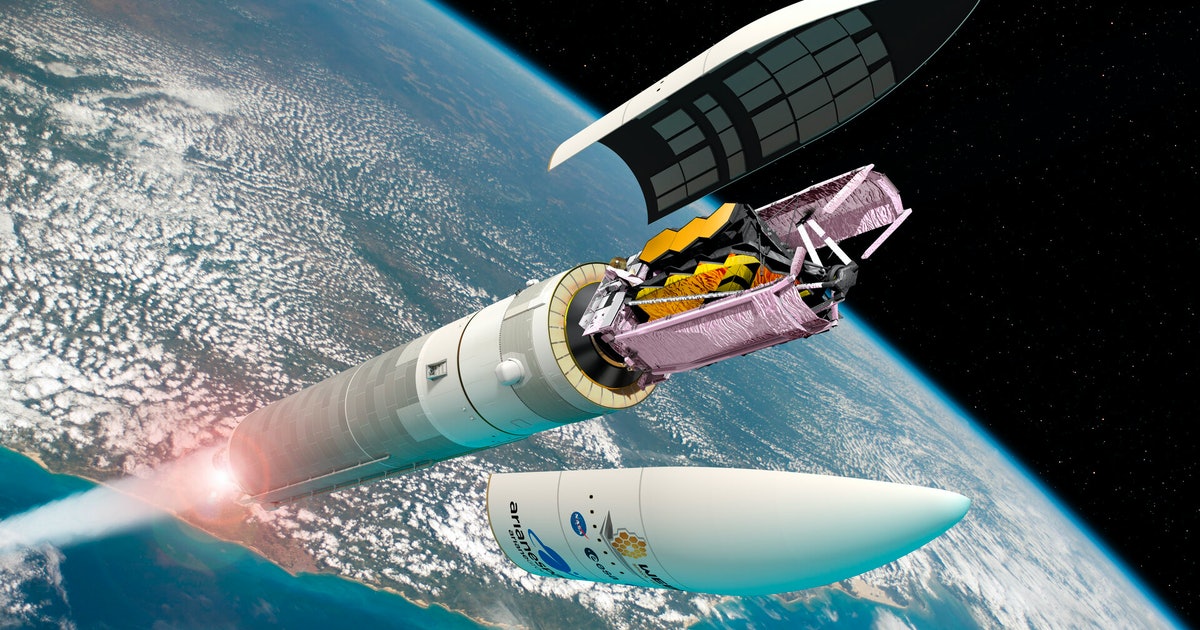 Where is the James Webb Space Telescope? 8 days to launch

New Year is a mere 17 days away — have you taken a moment to reflect on the highs and lows of the year yet? Too soon, perhaps, but there is one thing that I decided to do in 2021 I may yet regret. Earlier this year, I bet the Science editor, John Wenz, that the James Webb Space Telescope would not launch in 2021. Yet if seeing is believing, I think I am going to lose.

I’m Claire Cameron, an editor at Inverse. Welcome to Tuesday, thrilled you could join me at a distance. Keep scrolling to find out why I should never try predicting the future again, and more incredible science stories from Inverse.

This is an adapted version of the Inverse Daily newsletter for Tuesday, December 14, 2021. Subscribe for free and earn rewards for reading every day in your inbox. ✉️

The Hubble successor James Webb Space Telescope took another step toward its December 22, 2021 launch from ESA’s spaceport in French Guiana. A new photo posted this week by the European Space Agency doesn’t exactly show the James Webb Telescope itself — instead, it shows a box encasing the Webb as it heads toward a new building for the final stages of its assembly. The Webb appears to have made the trip in the dead of night.

This is the final stop before the Webb is placed on top of the rocket that will propel it into space — the Ariane 5. It is also a sign that NASA and the ESA are running on schedule. Images of the fully assembled rocket should drop this week, so stay tuned and follow along with us as we watch what could be the launch of the century gear up.

This is why it matters.

Read this next: “30 days of terror”: The James Webb telescope’s troubles are just getting started

Today, there are more than 1,600 CubeSats in orbit around the Earth, with more than 1,000 of those launching in 2020 alone. But while these inexpensive small satellites have made space more accessible to university classes, small companies, and more, their forerunners stretch back to the beginning of the Space Age.

What was OSCAR 1? OSCAR 1 was a metal box, slightly curved, measuring 30 by 25 by 12 centimeters, and weighing just less than 10 pounds, a design born out of the raw necessity of hitching a ride where it could on an Air Force Agena spacecraft.

Here’s how they did it — and changed the space race forever along the way.

Go deeper: How 65,000 satellites (including Starlink) could distort the night sky

By the mid-1990s, Tim Burton had reached a level of success few other filmmakers could dream of, but he was about to come crashing down to Earth.

“It was a strange and fun movie to make,” Burton tells Inverse.

The all-star cast is all the more remarkable when you consider the film’s essential premise. Based on popular trading cards depicting Martians brutally murdering everyone on Earth, Mars Attacks! was a weird, subversive project in which human heads were reattached to dog bodies.

Go deep in the lore.

In a new “megastudy,” thirty psychologists tried out 53 gym motivation strategies on 61,293 gym members. One of the key findings: Psychologists are not good at predicting what motivational techniques actually work to get people to go to the gym consistently.

But the study also found that the most effective motivational techniques were not based on guilt, shame, or promises of a healthier, happier body and mind. Rather, the most motivation came from giving members a tiny amount of credit points to their Amazon account per gym visit.

Even if the credit amounted to mere pennies, the system tended to get more people to the gym more often and consistently than these other common motivational measures:

Read this next: 10 minutes of this accessible exercise may result in a better brain

New Year is a mere 17 days away — have you taken a moment to reflect on the highs and lows of the year yet? Too soon, perhaps, but there is one thing that I decided to do in 2021 I may yet regret. Earlier this year, I bet the Science editor, John Wenz, that the…

New Year is a mere 17 days away — have you taken a moment to reflect on the highs and lows of the year yet? Too soon, perhaps, but there is one thing that I decided to do in 2021 I may yet regret. Earlier this year, I bet the Science editor, John Wenz, that the…