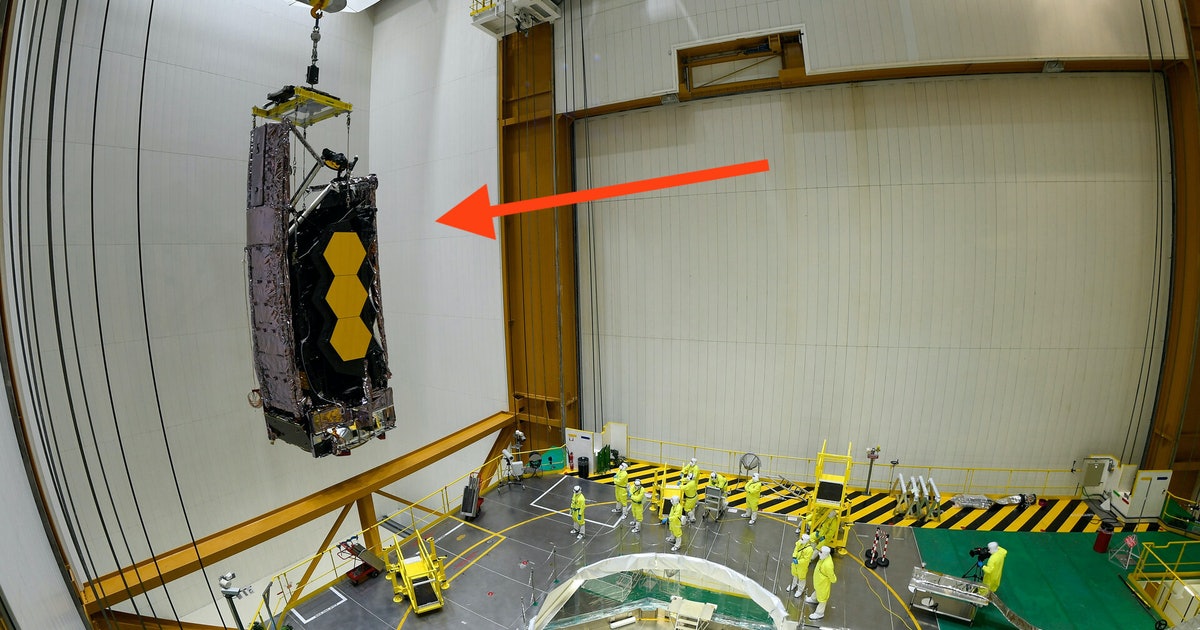 The James Webb Space Telescope, the multi-billion-dollar instrument on which the hopes and dreams of astronomers worldwide rest, has been securely attached to the rocket that will carry it to space.

In the latest images released by the European Space Agency, Webb sits atop an Ariane 5 rocket. It’s surrounded by a “shower curtain” meant to protect the delicate mechanisms from contamination. The rocket attachment took place on Saturday.

The telescope is nearly ready for its December 22 launch, the end of a much-delayed, long-anticipated saga that will hopefully see humanity’s most powerful telescope lifted safely into the cosmos.

Webb is currently in French Guiana, off South America’s north-eastern coast, where French satellite company Arianespace is finalizing the nerve-wracking process of preparing the telescope for launch.

NASA shipped it from California through the Panama Canal in a specially-made container, where it faced the all-too-real threat of modern-day pirates. After arriving in French Guyana, ESA performed a series of tests and topped up Webb’s fuel at the payload preparation facility before carefully shuttling it to the vehicle assembly building. Now bolted securely to its steed, the telescope is awaiting the protective rocket fairing, or nose cone, that will enclose it on its journey.

The latest step in Webb’s journey marks the culmination of decades of work. The telescope is a joint project of ESA, NASA, and the Canadian Space Agency and cost nearly $10 billion to complete.

Originally planned to launch in 2011, the space telescope’s construction has been plagued with setbacks and delays. Pushed from 2018 to 2019 to 2020 to, finally, October of this year, Webb was delayed once again by another launch at the spaceport. Then, a malfunctioning clamp pushed the planned December 18 launch back another few days.

But the launch appears to be proceeding smoothly now, though it’s far from the end of the telescope’s journey. After leaving Earth’s atmosphere, the protective fairing will fall away and Webb will separate itself from the rocket. Its destination is a point known as the second Lagrangian (L2), where the gravity from Earth and the Sun balance each other perfectly. There, a million miles behind our planet, the spacecraft will be able to stay perfectly still relative to the Earth — an ideal situation for a space telescope.

On the month-long journey to L2, Webb must unfold itself in a complex sequence of reverse origami. The telescope’s primary mirror, composed of 18 gold sections, is 21 feet in diameter, and it possesses a sun shield the size of a tennis court. That’s far too big to fit inside a rocket, so NASA and its partners designed the telescope to fold itself up neatly for the journey. That process must go off without a hitch, or the telescope may not work at all. Unlike Hubble, which orbits Earth, Webb will be too far away to repair. If something goes wrong, that’s it.

Once at L2, Webb will spend six months turning itself on and calibrating its instruments. These include both near- and mid-infrared sensors and two spectrographs.

Together, Webb’s capabilities will allow it to peer back almost to the beginning of the universe, to when galaxies were just beginning to form. That’s farther than humans have even been able to look before, and it will unlock new discoveries — and perhaps new mysteries — about the founding of our universe.

Webb will also be able to look into the atmospheres of exoplanets and determine what kinds of molecules are there. That’s something eagerly awaited by exoplanet astronomers, who will be able to search for telltale signs of life on planets beyond our solar system.

Once in place, the telescope is meant to run for decades, fueled by 159 liters of hydrazine that will allow it to make minor adjustments to its orientation as needed. That means astronomers can look forward to years of new discoveries and fruitful space exploration — as long as Webb makes it out there, of course.

The James Webb Space Telescope, the multi-billion-dollar instrument on which the hopes and dreams of astronomers worldwide rest, has been securely attached to the rocket that will carry it to space. In the latest images released by the European Space Agency, Webb sits atop an Ariane 5 rocket. It’s surrounded by a “shower curtain” meant…

The James Webb Space Telescope, the multi-billion-dollar instrument on which the hopes and dreams of astronomers worldwide rest, has been securely attached to the rocket that will carry it to space. In the latest images released by the European Space Agency, Webb sits atop an Ariane 5 rocket. It’s surrounded by a “shower curtain” meant…

How did life arise? New study offers fundamental evidence for a disputed theory