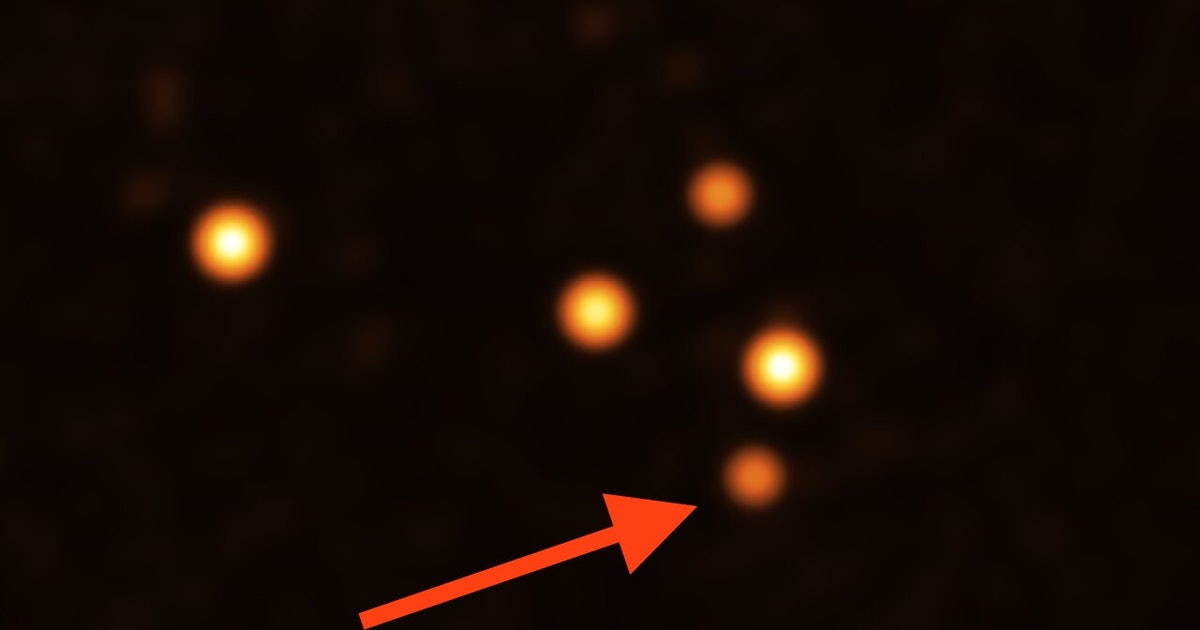 The center of the Milky Way is a place of chaos.

Using the European Southern Observatory’s Very Large Telescope Interferometer, a team of astronomers was able to zoom in 20 times deeper than ever at the center of the Milky Way. The researchers detailed their findings in two studies published in the journal Astronomy and Astrophysics.

What’s new — The images showed that 99.9 percent of the mass of the very center of the Milky Way is due to the black hole, with only 0.1 percent attributed to stars, smaller black holes, interstellar dust, and gas, or dark matter.

The team was also able to measure the position and velocity of four stars, known as S2, S29, S38, and S55, orbiting around the supermassive black hole, as well as discover a new star, S300. The star had never been seen before because it is relatively faint compared to the other four stars.

“We want to learn more about the black hole at the centre of the Milky Way, Sagittarius A*: How massive is it exactly? Does it rotate? Do stars around it behave exactly as we expect from Einstein’s general theory of relativity?” Reinhard Genzel, a director at the Max Planck Institute for Extraterrestrial Physics (MPE) in Garching, and lead author of the studies, said in a statement. “The best way to answer these questions is to follow stars on orbits close to the supermassive black hole. And here we demonstrate that we can do that to a higher precision than ever before.”

Here’s the background — A black hole is a region of space with a gravitational pull so strong that nothing can escape its influence, not even light itself.

The largest-known black holes lurk at the center of galaxies, and scientists believe that most large galaxies have a supermassive black hole at their center. Although astronomers can’t directly observe black holes because they do not emit light, they know black holes are there due to their influence on their surroundings.

Why it matters — The latest observations, which were conducted between March and July 2021, produced the most precise measurements of the stars as they orbited near the black hole.

The star S29 made its nearest approach to the black hole in late May 2021 at a distance of 13 billion kilometers, which is about 90 times the distance between the Sun and Earth. The star was traveling at a speedy 8,740 kilometers per second.

This marks the closest, and fastest, approach of any star to Sagittarius A*.

The stars orbit the black hole the same way as predicted by Einstein’s theory of general relativity. Einstein had predicted that an object’s closest approach to the object it is orbiting changes with each lap, with the shape of the orbit ending up as a rosette.

This effect is known as Schwarzschild precession and was clearly observed in the latest images.

Using the latest observations, astronomers were also able to accurately measure the distance between Earth and the supermassive black hole, which came out to 27,000 light years.

What’s next — The Event Horizon Telescope collaboration is fast at work trying to image Sagittarius A*, hoping to detail its immediate surroundings and discover its inner workings. This, paired with research like the new papers, will help us understand what powers not just our galaxies, but others throughout the universe.

Abstract — Stars orbiting the compact radio source Sgr A* in the Galactic Center serve as precision probes of the gravitational field around the closest massive black hole. In addition to adaptive optics-assisted astrometry (with NACO / VLT) and spectroscopy (with SINFONI / VLT, NIRC2 / Keck and GNIRS / Gemini) over three decades, we have obtained 30-100 µas astrometry since 2017 with the four-telescope interferometric beam combiner GRAVITY / VLTI, capable of reaching a sensitivity of mK = 20 when combining data from one night. We present the simultaneous detection of several stars within the diffraction limit of a single telescope, illustrating the power of interferometry in the field. The new data for the stars S2, S29, S38, and S55 yield significant accelerations between March and July 2021, as these stars pass the pericenters of their orbits between 2018 and 2023. This allows for a high-precision determination of the gravitational potential around Sgr A*. Our data are in excellent agreement with general relativity orbits around a single central point mass, M• = 4.30 × 106M, with a precision of about ±0.25%. We improve the significance of our detection of the Schwarzschild precession in the S2 orbit to 7σ. Assuming plausible density profiles, the extended mass component inside the S2 apocenter (≈ 0.2300 or 2.4 × 104RS) must be . 3000M (1σ), or . 0.1% of M•. Adding the enclosed mass determinations from 13 stars orbiting Sgr A* at larger radii, the innermost radius at which the excess mass beyond Sgr A* is tentatively seen is r ≈ 2.5 00 ≥ 10× the apocenter of S2. This is in full harmony with the stellar mass distribution (including stellar-mass black holes) obtained from the spatially resolved luminosity function.

The center of the Milky Way is a place of chaos. A supermassive black hole with a mass of about 4 million times that of the Sun named Sagittarius A* lurks in the galactic center, with a group of stars gripped in its orbit. Astronomers recently captured the deepest images of the region around the…

The center of the Milky Way is a place of chaos. A supermassive black hole with a mass of about 4 million times that of the Sun named Sagittarius A* lurks in the galactic center, with a group of stars gripped in its orbit. Astronomers recently captured the deepest images of the region around the…