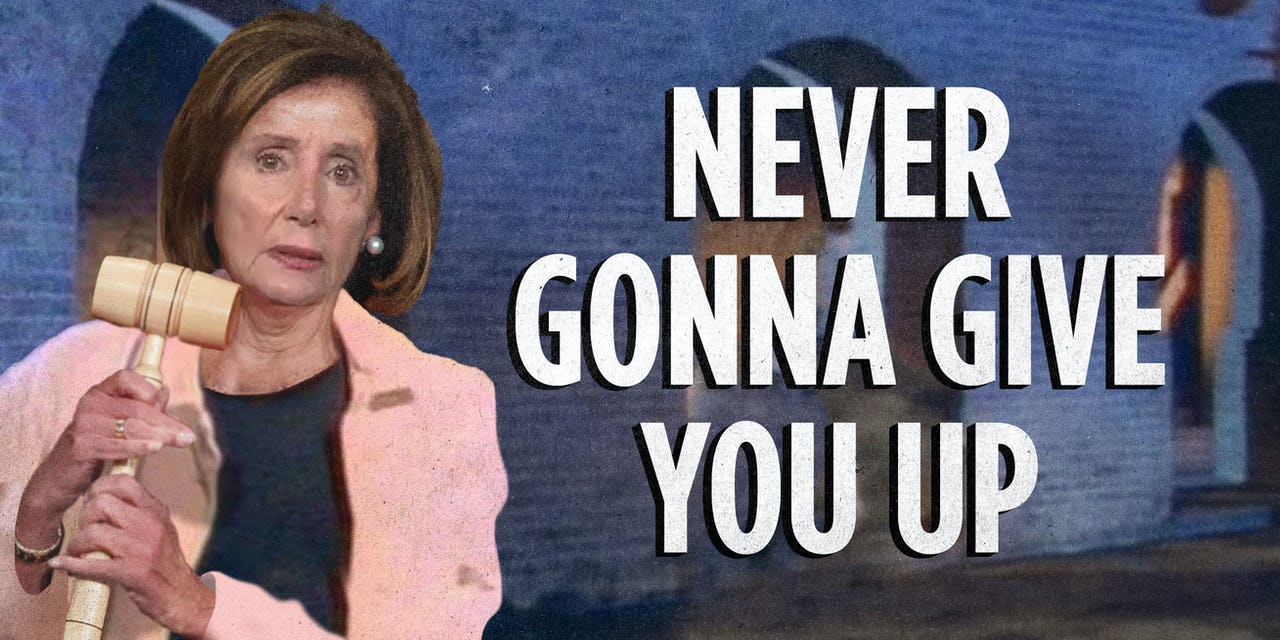 The speaker has grown awfully fond of that gavel, but the American people seem more than ready to desert her next November.

What is it about ancient politicians and their death-grip on power? What is it that keeps them from knowing when enough is enough? Nancy Pelosi, the 81-year-old San Franciscan speaker of the House, doesn’t appear the least bit interested in pondering these questions.

Pelosi, who, like Muhammad Ali, has already hung on for a few fights too many, has plans to hang on for a few more. Rather than turning things over to a more youthful, more energetic generation of leftists, Pelosi plans to stay in office at least until after the midterm elections, and possibly beyond. As her dearest pals over at The Most Trusted Name In News™ report:

[Pelosi] is planning to file and run for reelection in her San Francisco district next year — at least for now — in keeping with her pattern of deciding about staying in Congress after the elections, when she likely will have won an 18th full term.

And sources familiar with Pelosi’s thinking say she isn’t ruling out the possibility of trying to stay in leadership after 2022, despite her original vow to leave as the top House Democrat. She’ll devote much of next year to raising money for Democrats as they try to hold their narrow majority, those sources tell CNN, adding to the nearly $1 billion her office calculates she has already raised for Democrats in her time as leader.

It’s hard to know what’s more depressing: that Nancy Pelosi won’t go away, or that she’s raised so much money from so many useful idiots. But there’s an upside to all this: She’s on borrowed time as House speaker. A recent poll from CNBC paints a miserable picture for Pelosi’s party.

According to the survey, President Joe Brandon’s unpopularity seems to have arrested itself at 41% approval to 50% disapproval, but he’s now under water in the only metric on which he’d previously been afloat: his handling of the coronavirus, from which he foolishly declared our independence during the 4th of July holiday. (It’s true that many millions of Americans no longer live in mortal fear of COVID-19 or its variants, but none of this is thanks to the Democrats, who now identify as The Party of the Permanent Pandemic.)

Elsewhere, Biden’s handling of the economy is at a dismal 37% approval to 56% disapproval, and even his tepid approval among those who voted for him has slid from 80% to 69% since April. Of course, the people’s disappointment with a sitting president rarely fails to fasten itself to his party, and this certainly seems to be the case with Scranton Joe.

What should worry Nancy Pelosi more than any of these numbers, though, is her party’s standing on what’s known as the generic ballot question. When survey respondents were asked which party they’d prefer to be in control of Congress, they went 44-34 for Republicans. That’s a historic margin, and it’s up from a mere two-point Republican advantage in CNBC’s October survey. (When Republicans poll near or even with Democrats on this question, they tend to do well in the coming election. When they poll a whopping 10 points ahead of Democrats, well, that has the makings of a serious shellacking.)

Why would Nancy Pelosi decide to stick it out at this point? Because she has no choice. She’s the captain of the House Democrats’ ship, and she has been for nearly 20 years. If she bails now, it’d be a sign to every other wavering Democrat to abandon that ship — to say nothing of the stench of cowardice that would come with such a capitulation.

In late November, in fact, Pelosi sent a letter to donors and grassroots supporters that said, “We are preparing for victory one year out.”

This is delusional, and everyone but Nancy knows it. When it comes to that speaker’s gavel, the American people may just have to pry it out of her cold, dead hands.

By  DOUGLAS ANDREWS December 14, 2021 in Politics The speaker has grown awfully fond of that gavel, but the American people seem more than ready to desert her next November. What is it about ancient politicians and their death-grip on power? What is it that keeps them from knowing when enough is enough? Nancy Pelosi,…

By  DOUGLAS ANDREWS December 14, 2021 in Politics The speaker has grown awfully fond of that gavel, but the American people seem more than ready to desert her next November. What is it about ancient politicians and their death-grip on power? What is it that keeps them from knowing when enough is enough? Nancy Pelosi,…