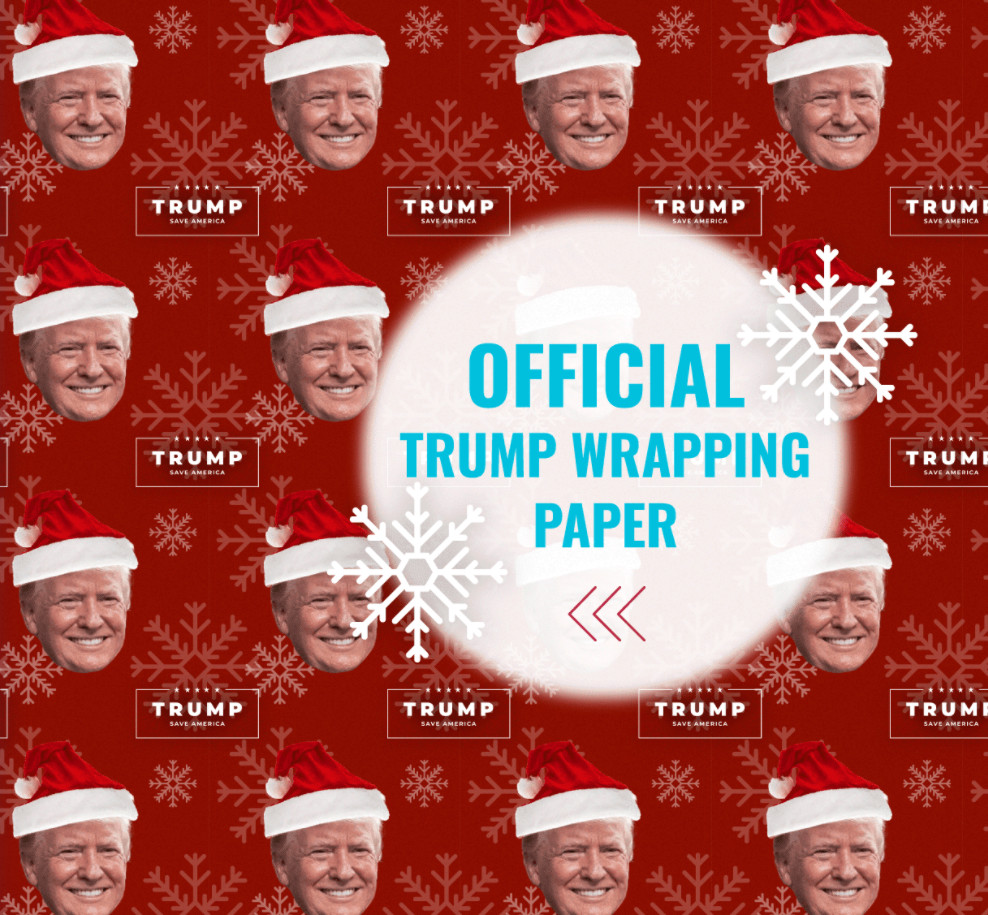 As the Fox News Christmas tree was lit aflame in New York City, reportedly by a troubled homeless man, the network and right-wing media sprang into action. “Torching Christmas trees,” Tucker Carlson said, “is an attack on Christianity.” To Fox and its friends in the religious right, it was just the latest skirmish in the never-ending “War on Christmas” supposedly being waged by leftist secularists against their Christian nation. Of course, to the broader right-wing movement, it was also a sign of how the country has descended into chaos without a White House occupied by former President Donald Trump, who we all know “saved Christmas.”

So, while all those on the left may be granted coal this holiday season, what may good conservatives be unwrapping under their Christmas trees (that is, assuming they still stand)? We’re glad you asked. Right Wing Watch’s 2021 annual gift guide for the holiday season is here.

Looking for some holiday cheer this season? You can order a “It’s Beginning To Look A Lot Like Let’s Go Brandon!” T-shirt for person in your life who really wants to say “Fuck Joe Biden” but realizes there are kids around. Sold on Donald Trump Jr.’s website, it’s a good reminder that while the holiday season might be about giving and thanks, it’s also about sticking it to the liberal in your family. MyPillow’s Mike Lindell made himself a financial sugar daddy to the so-called Stop the Steal movement and an array of right-wing media operations, where hosts can often be heard hawking MyPillow products. Lindell’s own platform, frankspeech.com, is promoting a MyPillow Christmas special. For $49.98 you can get a copy of Lindell’s memoir for yourself and a set of five travel-size MyPillows with children’s Bible story illustrations for the grandkids. He also was so kind as to grant us this video—promoted by far-right conspiracy theorist Jack Posobiec—featuring a stirring rendition of “A Visit from St. Nicholas.” Save Christmas With Trump on Your Tree

If you have a family member who believes Donald Trump was anointed by God, Don Jr. will help you help them put Trump at the center of their Christmas celebration. For a $75 contribution to Trump’s ongoing political efforts, you can get your very own “ICONIC” “Trump Save America Christmas” ornament in the mold of a tiny red baseball cap. Your money will go to Save America JFC, a joint fundraising committee comprising Trump’s Save America and the Make America Great Again PAC. And according to one of the emails promoting the ornament, it might even help you “SAVE CHRISTMAS.” To make it the ultimate Trump gift, wrap it in “Official Trump Wrapping Paper,” featuring multiple copies of the former guy grinning under a Santa hat. Compared to the ornament, the wrapping paper is a relative bargain. It will set you back just $35. Fauci as the Grinch

There’s no shortage of far-right pundits and activists making money selling nutritional supplements, prepper food, and clothing that lets the world know you’re full MAGA and ready for the End Times. Seth Rich conspiracy theorist Matt Couch can take care of all your needs under his FaithNFreedoms brand. Stick with the season with a “How Dr. Fauci Stole Christmas” shirt, or let everyone know you believe this is a Christian nation with one of an array of shirts mingling the Christian cross and the U.S. flag. And if you already bought Jim Bakker’s food buckets for your favorite prepper last year, Couch can help you mix things up with a three-month emergency food stash from My Patriot Supply for just under $800. Let Milo Yiannopoulos Serve as Your Guide to Scripture

What better way to soak up the word of God this holiday season than to have the books of Psalms and Proverbs read to you by none other than Milo Yiannopoulos? Once a right-wing enfant terrible who reveled saying outrageous things for fun and profit until doing so got him canceled after he defended pederasty, Yiannopoulos has since rebranded himself as “ex-gay” and Catholic. Fittingly, Yiannopoulos has now teamed up with the Church Militant network, which is offering a 6-CD set featuring recordings of Yiannopoulos reading the complete books of Psalms and Proverbs for a mere $75.

Warn Your Children of the Scheme to Cancel Christmas

In addition to being a right-wing pastor and unsuccessful “prophet,” Hank Kunneman also fancies himself a children’s and comic book author. On his website, Kunneman offers multiple books featuring characters he created named Mutzphey and Milo, which he claims God gave to him in a dream, as well as a series of comic books featuring a character known as Captain Zepto, including one specifically written for the holiday:

It’s almost Christmas, and something strange is happening in Jollytown: manger scenes, decorations, and gifts are missing, and holiday cheer is quickly turning into utter chaos! The evil Dr. Zorb, armed with crooked candy cane devices that cause people to forget Christmas, has snuck in unnoticed.

Is this the end of Christmas?

In the outer reaches of the galaxy, Captain Zepto and the Light Brigade learn of Zorb’s evil scheme, and set off to save the season. Do they have what it takes to bring joy back to Jollytown? Is this the last chance? And what will happen to the holiday fruitcake?

Time is running out! Come along with Zepto and the crew as they race to stop Dr. Zorb’s scheme to cancel Christmas! Heaven Must be Missing a Lizard

“Prophetess” Kat Kerr claims to have traveled to Heaven innumerable times, where she seen everything from cows driving tractors to entire cities made out of Jello-O. While you might not get to travel back and forth to Heaven as regularly as Kerr does, you can still get a glimpse of what it is like thanks to this print being sold by Kerr on her website showing “a young girl who lives in Heaven and has built a snowman that is riding on her sleigh with her pet lizard Iggy. They are on their way to Jesus’ birthday party.” Trump on Your Coffee Table

If you really want to bring a smile to the face of your favorite Trumpist you can pick up a copy of Trump’s post-presidency Christmas book. No, Trump didn’t write a book, or even hire anyone to write one. Instead, Junior started a publishing company to produce a picture book of Trump’s adventures as the 45th president. (Nothing says Merry Trump Christmas like using your “public service” to enrich your family.) You can pick up “Our Journey Together” for $74.99, all while regretting that you were not fast enough to pick up an autographed copy for $229.99 before they sold out. Socks for the QAnon Cultist

QAnon cult members are notoriously difficult to shop for, but fortunately the fine folks at Step On Socks have created the perfect gift to allow the QAnon conspiracy theorist in your family to prove that they are committed to the fight against the globalist satanic sex traffickers down to their soles of the feet… literally.

For just $17.76, you can get three pairs of their “Step On Pedophiles, Adrenochrome Traffickers, Pedowood” socks, which “are suitable for the whole family. Three camouflage patterns show that you are the hunter and not the sheep.”

STEP ON The Child molesting and Child trafficking SCUM!!! Put those God Forsaken creatures under your feet with a 3-pack of Free Our Kids socks! As the Fox News Christmas tree was lit aflame in New York City, reportedly by a troubled homeless man, the network and right-wing media sprang into action. “Torching Christmas trees,” Tucker Carlson said, “is an attack on Christianity.” To Fox and its friends in the religious right, it was just the latest skirmish in the…

As the Fox News Christmas tree was lit aflame in New York City, reportedly by a troubled homeless man, the network and right-wing media sprang into action. “Torching Christmas trees,” Tucker Carlson said, “is an attack on Christianity.” To Fox and its friends in the religious right, it was just the latest skirmish in the…