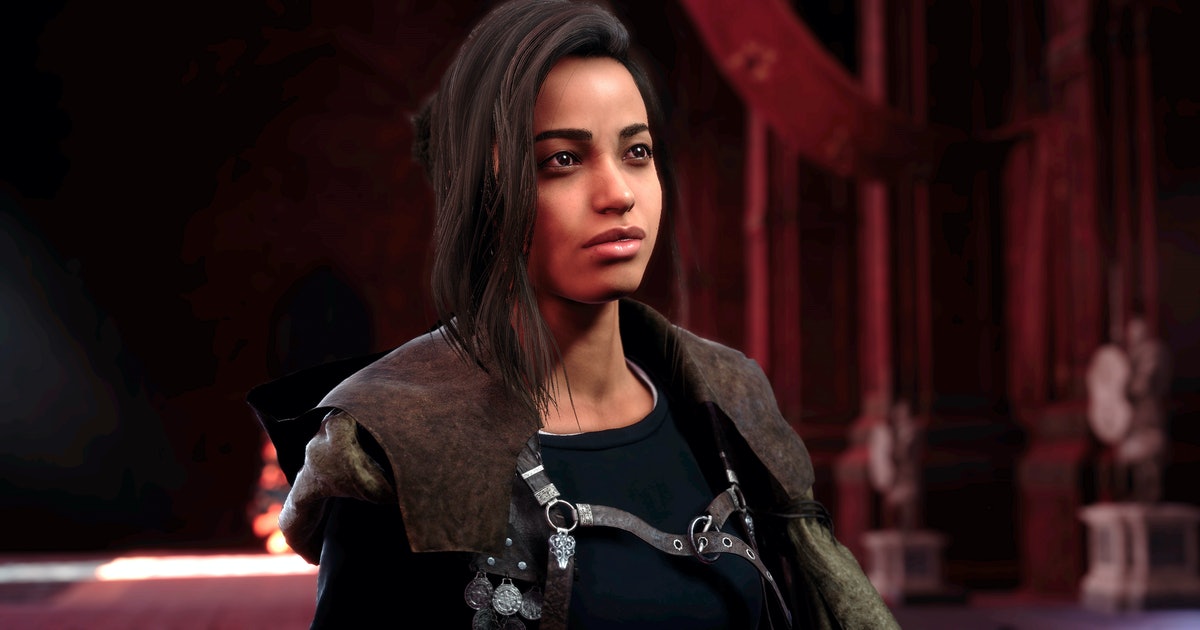 The past, present, and future of Forspoken are decidedly female.

In the highly anticipated 2022 action RPG from Square Enix, our hero Frey hails from the real world. But she suddenly finds herself in the fantasy realm known as Athia thanks to a mysterious purple portal. Once there, the locals quickly brand her a witch, demon, and potential sorceress.

But the magic and mysticism aren’t all that separates Forspoken from our own world: Athia is a matriarchal society that’s entirely run by — and also threatened by — formidable women.

It’s a welcome departure from the typical role-playing game, where men are usually both the heroes and villains, while women are relegated to healing spells, tending shops, and waiting to be rescued.

“It’s not common that a video game is all badass women,” Allison Rymer, one of Forspoken’s lead writers, says during a preview for the game.

Though many of the game’s finer details remain a mystery, Forspoken’s Creative Producer Raio Mitsuno reveals to Inverse how one totally novel customization option in Forspoken reflects the duality between reality and fantasy, but also the game’s emphasis on different female perspectives.

Magical matriarchs called the Tantas formerly ruled Athia, with each embodying a different virtue and wielding a special power. However, some time ago, they all turned evil and spiteful. “The Tantas were a central theme of the game,” Mitsuno wrote in a PS Blog post, “so it’s not a stretch to say that all the art in Forspoken was designed around them — their virtues and their corruption, their beautiful, yet terrifying, appearances.” Developing and defining a relatable female lead as a counterpoint was essential.

With a talking bracelet called “Cuff,” Frey wields magical parkour to traverse a beautiful yet cruel world where a miasma called “The Break” is destroying or corrupting all forms of life (perhaps even the Tantas?). Frey is one of the few people who can survive outside humanity’s last bastion, the city of Cipal. As she learns a variety of magical powers, the player can equip different cloaks to customize those abilities. Players can also paint Frey’s nails to further augment her powers.

“Nails are a part of Athian lore and culture,” Mitsuno tells Inverse. “It’s similar to ancient civilizations like Egypt and Babylonia. We wanted to use something that’s part of the ethnic culture but also has parallels to the real world.”

In real-life ancient societies, “the act of painting one’s nails could relate to their status and power.” The same is true of Athia’s magic.

It’s fitting for a story where a seemingly normal woman is suddenly thrust into a magical fantasy world. Mitsuno explains that a major thematic focus in Forspoken is this duality and contrast of the modern real world with classical fantasy. In one sense, you get to deck Frey out with some dazzling nail designs that would look cool in the real world. In another, she’s strengthening her spellcasting by painting special runes on her body using “Break shards.”

But how exactly do these custom nail designs relate to the Break, the magical blight that plagues Athia? Is it something that the Tantas also do? Could it be the source of their power, the conduit through which they channel a more untamed kind of magic? In any case, it’s a pointedly feminine take on character customization.

Rymer says it was refreshing to write a story so heavily invested in prominent female characters.

“My favorite part was that I got to write a video game about women, and it’s so cool!” she says.

In many ways, Forspoken is already unlike any other RPGs, particularly from publisher Square Enix. The game is being developed by Luminous Productions, the same team that produced Final Fantasy XV.

Both offer an action-oriented, open-world take on the role-playing genre. FF15 is a modern fantasy where four guys drive around in a fancy car to fight robots with guns and save the world from disaster both political and cosmic. Seeing characters in contemporary clothes fight primordial magical beings is a tonal clash Final Fantasy has been exploring since Final Fantasy VII more than 20 years ago. FF15 was just the most recent.

Forspoken feels reactionary by comparison: Instead of four male leads fighting a male villain in a modern fantasy, it’s one woman going up against a series of sorceresses in a full-on medieval fantasy.

“It’s more of a coincidence than a conscious decision,” Mitsuno says when asked about the shift. “We had a king and his buddies on a road trip. Now we have a matriarchal society ruled by these powerful sorceresses, with Frey as a protagonist.”

Other than the male cat Homer and Cuff’s masculine voice, Forspoken seems to focus almost entirely on women characters — a refreshing change of pace for a genre that’s often dominated by masculine leads, but enjoyed by many feminine fans.

The past, present, and future of Forspoken are decidedly female. In the highly anticipated 2022 action RPG from Square Enix, our hero Frey hails from the real world. But she suddenly finds herself in the fantasy realm known as Athia thanks to a mysterious purple portal. Once there, the locals quickly brand her a witch,…

The past, present, and future of Forspoken are decidedly female. In the highly anticipated 2022 action RPG from Square Enix, our hero Frey hails from the real world. But she suddenly finds herself in the fantasy realm known as Athia thanks to a mysterious purple portal. Once there, the locals quickly brand her a witch,…

Where is the James Webb Space Telescope? 8 days to launch