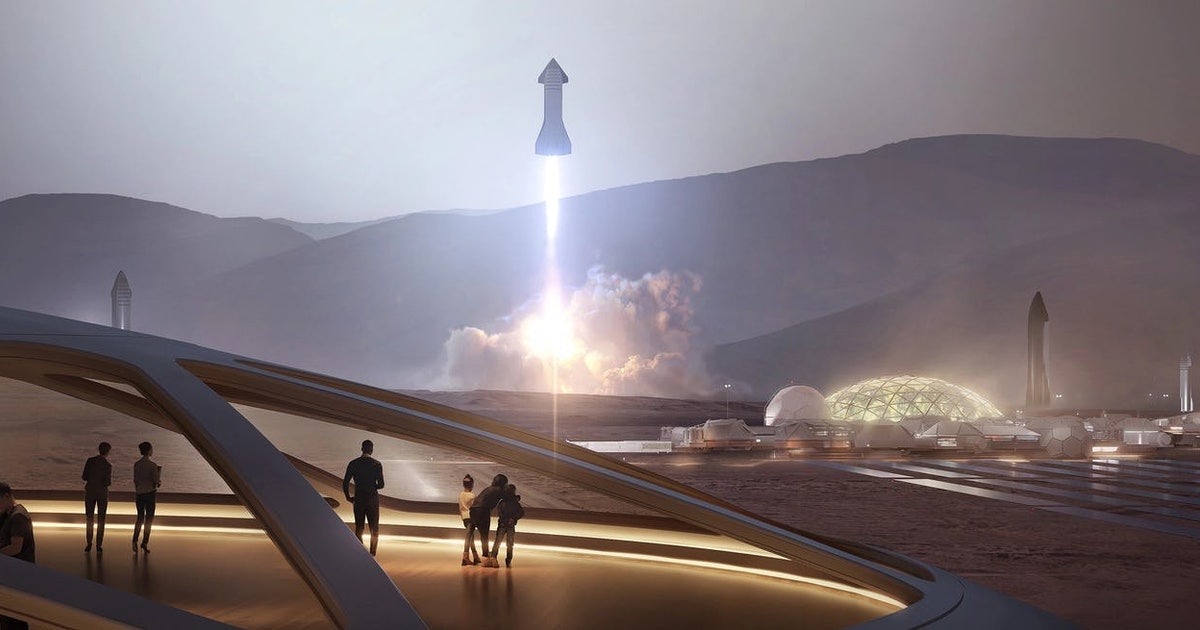 Elon Musk reveals ambitious timeline for getting to Mars

When will SpaceX’s Starship get to Mars? According to Elon Musk, it could be surprisingly soon.

The company’s under-development rocket has yet to complete its first orbital flight, but in a Monday interview, the SpaceX CEO appeared positive that the ship will meet its most ambitious targets on time. These include a trip around the Moon in 2023 and getting to Mars this decade.

Musk made the comments in a Time interview published Monday. The magazine also announced that Musk is its person of the year for 2021.

The comments suggest that, despite clashes with the Federal Aviation Administration and issues with the ship’s Raptor engine, Musk remains confident that his ambitious ship will power SpaceX’s biggest missions this decade.

If he succeeds, SpaceX could help transform humanity into a multi-planet species — he aims to use the early missions to kickstart a million-strong city on Mars as early as 2050. But as space consultant Rand Simberg told Inverse in November, Musk’s biggest hurdles could be a little closer to home.

Want to find out more about SpaceX’s plans to open up access to space? Subscribe to MUSK READS+ for exclusive interviews and analysis about spaceflight, electric cars, and more.

SpaceX Starship: The timeline for getting to the Moon and Mars

During the Monday interview, Musk suggested SpaceX could head for the Moon in around two years:

“‘I think we can do a loop around the moon maybe as soon as 2023,’ he says, and land on the moon’s surface within three years.”

He also claimed that SpaceX could land on Mars by around 2026:

“‘I’ll be surprised if we’re not landing on Mars within five years,’ he finally says.”

2023: Moon mission — This is likely a reference to the “Dear Moon” trip, outlined in 2018, which will send Japanese billionaire Yusaku Maezawa and a group of passengers on a tour around the Moon. The six-day voyage will take three days to get to the Moon and three to come back.

2024: Moon’s surface — In April, NASA announced it had chosen SpaceX to build the lunar lander for its upcoming Artemis mission. This will send the next man and first woman to the surface of the Moon. SpaceX’s ship will transport the astronauts between the Orion spacecraft and the surface.

It’s unclear whether the Artemis mission will actually meet this target, as NASA says that 2025 is a more realistic goal. Administrator Bill Nelson claimed in November that the project “lost nearly seven months to litigation.”

SpaceX Starship: Will Elon Musk meet his ambitious timeline for the Moon and Mars?

What’s fascinating about Musk’s new comments is that he’s sticking to this ambitious timeline. This is despite two main setbacks:

Delays to the first orbital flight — SpaceX is preparing to launch a prototype of the Starship and its accompanying Super Heavy booster on a trip into orbit. The booster would land in the Gulf of Mexico, while the ship would land in the sea north of Hawaii.

In August, Musk claimed the ship would be ready to reach orbit “in a few weeks, pending only regulatory approval.” The Federal Aviation Administration delayed these plans due to an environmental review. The review will determine whether the ship can fly.

“[Musk’s] latest issue is not technical, it’s regulatory,” Simberg says. “He’s waiting for the [Federal Aviation Administration] to give him permission to fly out of Boca Chica [and] do an orbital flight.”

Raptor production crisis — Earlier this month, it emerged that SpaceX is struggling to build enough of the Raptor engines that will power the Starship and Super Heavy. Together, the two vehicles require 39 engines.

Musk has an ambitious target to build 800 to 1,000 Raptor engines per year. But in an email to staff earlier this month, Musk called for “all hands on deck” to recover from what is “a disaster.”

No Starship means no Starship revenue from governments and commercial clients. Earlier this month, Musk warned that a “severe global recession” would mean that bankruptcy “while still unlikely, is not impossible.”

When will SpaceX’s Starship get to Mars? According to Elon Musk, it could be surprisingly soon. The company’s under-development rocket has yet to complete its first orbital flight, but in a Monday interview, the SpaceX CEO appeared positive that the ship will meet its most ambitious targets on time. These include a trip around the…

When will SpaceX’s Starship get to Mars? According to Elon Musk, it could be surprisingly soon. The company’s under-development rocket has yet to complete its first orbital flight, but in a Monday interview, the SpaceX CEO appeared positive that the ship will meet its most ambitious targets on time. These include a trip around the…

Look: This dinosaur had a natural weapon unlike any other