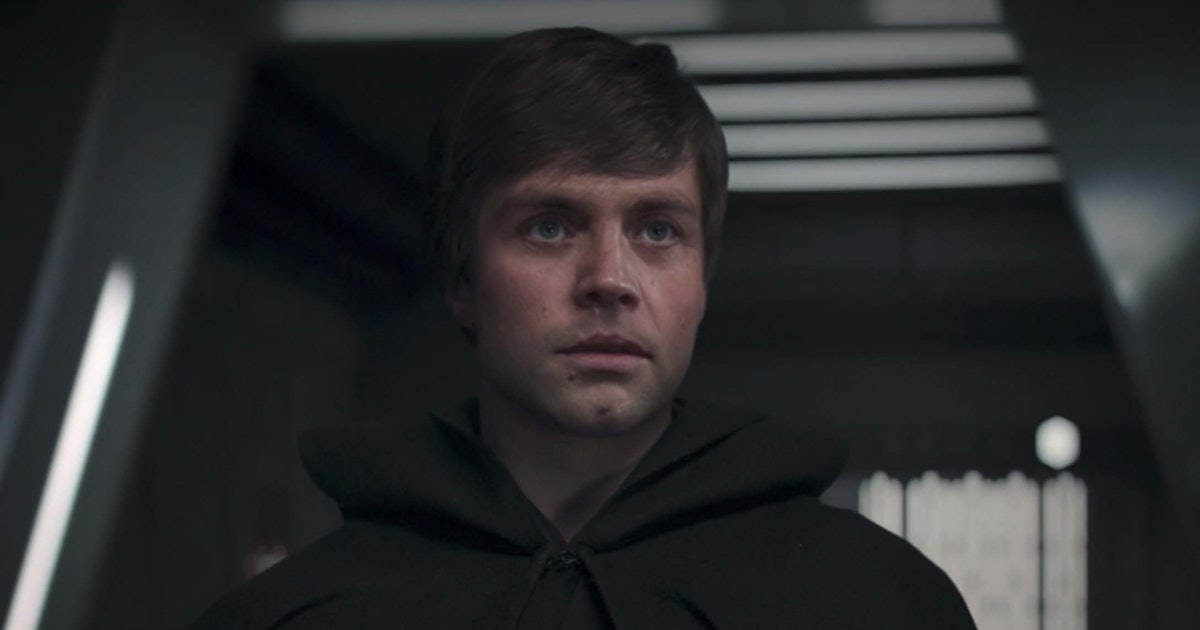 Time to pick up some power converters! It appears that someone in Star Wars is finally going to go to the Tosche Station. They’re not going there to waste time with their friends, and their chores might not even be done.

One image from The Book of Boba Fett could reveal that Fett himself is hitting up a mysterious unseen but pivotal Luke Skywalker hangout. Here’s what this Easter egg means and why a solution to this mystery has been a long time coming. Speculation ahead.

Just weeks away from The Book of Boba Fett hitting Disney+ proper, a new trailer gives us several new shots of what Boba might be up to in the new series. In one striking moment, Boba, clad in a very ‘70s jumpsuit, strides through a fairly generic-looking Star Wars doorway. The thing is, as many fans on Twitter have noticed, this doorway and its surrounding accouterments seem to match up with the same place Luke Skywalker once visited… in a deleted scene!

In Star Wars: A New Hope, Luke Skywalker infamously whines to Uncle Owen that he was “going to the Tosche Station to pick up some power converters!” Although the Tosche Station was depicted in the Star Wars Radio Drama and appeared in spin-off media, it hasn’t appeared on the screen.

So, how do fans know what it looks like? Well, in a deleted scene from A New Hope, Biggs Darklighter visits Luke on Tatooine at the Tosche Station and clues Luke in on the Rebellion. Also, in earlier drafts of the story (and in the Radio Drama), Luke visits his friends Camie and Fixer at the Tosche Station after observing a space battle overhead with his macro binoculars.

In this deleted scene, Camie was played by actress Koo Stark, who was implied to be someone Luke had a crush on. In the 2018 Jason Fry novelization of The Last Jedi, the novel begins with Luke dreaming of a timeline in which he never left Tatooine and Camie became his wife. Missed connection at the Tosche Station!

The point is, for being a place that Luke doesn’t visit in the film, the Tosche Station carries many interesting paths not taken for Star Wars canon in general.

But, beyond simply being a bizarre and deeply specific Easter egg, why does Boba Fett going to the Tosche Station matter?

Well, for one thing, if this is the Tosche Station, it makes the location more firmly canonical, and its importance to Luke in A New Hope more explicable. Deleted scenes in any franchise have an odd pseudo-canonicity, but in Star Wars, deleted scenes are particularly tricky. For example, when she was a younger girl, did Padmé Amidala befriend an alien named N’a-kee-tula — whose name translated to “sweetheart?” Wookieepedia puts “N’a-kee-tula” firmly in the “Legends” category, even though Padmé talks about this alien sweetheart in a deleted scene from Attack of the Clones.

Correlatively, we know the Tosche Station exists and that power converters can be had there because canonically, Luke mentions those things in A New Hope. But, the interior of the Tosche Station (if this is the Tosche Station) is now on-screen canon thanks to The Book of Boba Fett. This is kind of like the prequels making the name “Palpatine” more legit, even though the name was known to Star Wars fans who read books in the ‘80s and ‘90s, even though nobody says the word “Palpatine” in the original trilogy. (Nobody says the word “Sith” or “Ewok” in the OG trilogy either, so think about that for a second!)

Anyway, from a plot perspective within The Book of Boba Fett, why is Boba at the Tosche Station in this upcoming series? One guess is that what we’re seeing in this shot is part of a flashback, and the series will outline what happened to Fett after he escaped the Sarlacc in Return of the Jedi. Maybe the Tosche Station was the closest place Fett could walk to on foot from the Great Pit of Carkoon?

Either way, if Fett is back at one of Luke Skywalker’s old hangouts, then there may be a lot more classic-trilogy references in this series than anybody knows yet. A lot of people hung out on Tatooine. If Boba is hitting up all the familiar spots in Luke’s old neighborhood, funky deleted scenes might be no match for the blast of a giant Easter egg extravaganza ahead.

Time to pick up some power converters! It appears that someone in Star Wars is finally going to go to the Tosche Station. They’re not going there to waste time with their friends, and their chores might not even be done. One image from The Book of Boba Fett could reveal that Fett himself is…

Time to pick up some power converters! It appears that someone in Star Wars is finally going to go to the Tosche Station. They’re not going there to waste time with their friends, and their chores might not even be done. One image from The Book of Boba Fett could reveal that Fett himself is…