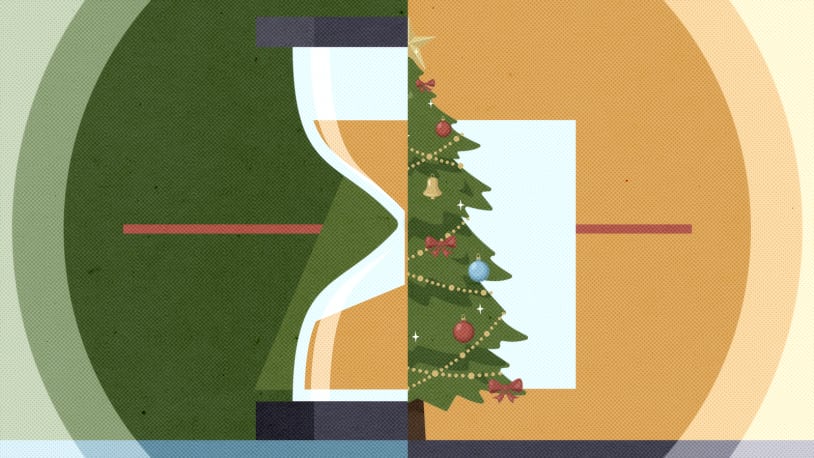 Advent’s lessons for parenting and pandemic

As Catholic families go, mine was pretty traditional. The sort that would pile into a maroon Plymouth Voyager and drive an hour and 15 minutes just to attend the Latin Mass on Sundays. We sang a lot of Gregorian chant. We didn’t eat meat on Fridays. And we didn’t celebrate Christmas during Advent.

That’s because Christmas Day, according to the liturgical calendar, is the beginning of the Christmas season, not the end. The weeks leading up to it are not a time for celebration, but joyful expectation. It is a season of waiting during which we prepare our minds and hearts and souls for Christ’s arrival.

For festivities, then, the Church cautions that Catholics shouldn’t get ahead of themselves. The Roman Missal advises that floral arrangements and music during Advent Mass, for example, should be “marked by a moderation suited to the character of this time of year, without expressing in anticipation the full joy of the Nativity of the Lord.”

In my family, that meant we set out a creche with an empty manger. We sang carols like O Come, O Come Emmanuel, which are somewhat more somber than their secular counterparts. We said the Rosary each night, then savored the single chocolate morsels pulled from our cardboard Advent calendars. Some families we knew held off on getting a tree until Christmas Eve, but we usually got ours a week or so out. Even with that small leniency, there were no Christmas parties until Christmas Day.

As a child, I found this season of waiting somewhat thrilling. As a teenager, I’m sure I wrote it off as curmudgeonly Catholic pedantry. As an adult, I mostly forgot about it after I married into a family that chops down (yes, literally chops down) a Christmas tree the day after Thanksgiving and throws an enormous and spirited (in more ways than one) “Murray Christmas” party every December. But now, nearly five years into parenting and two years into this pandemic, I have renewed esteem for my parent’s dutiful commitment to patience. Some of the most crucial tasks life assigns to us involve just that.

When I reflect on the most difficult days of my life as a parent of two small kids, it isn’t the time I’ve spent changing their diapers or wrestling them into raincoats that comes to mind. It’s the days I was tethered to a couch in my living room for their sake, often doing what looks a lot like nothing. Holding a sleeping child. Resisting the urge to intervene as my toddler struggles with her knobbed cylinder socket toys. Not exactly doing anything, per se, but unable to do anything else.

Once, when my children were two and three years old, my sister called to check in on me. After a few minutes of trying to talk around the children shrieking and climbing around me, my sister said she’d be happy to call back later if I was busy. “No, I’m not busy,” I explained. “I’m just sitting in chaos.”

Such is the peculiar nature of parenthood, the chief demands of which are largely imperceptible. It requires sacrificing your mobility and independence; ceding control of your schedule to a small being that has many needs and no capacity to take yours into account; sidelining your own desires until someone can come to relieve you from your post; waiting.

For many, the pandemic made similarly strange demands. Some of us took an active role in fighting the virus — developing vaccines, caring for the virus-stricken — but for the rest of us, our role was simply to put our life on hold: canceling graduation parties, delaying weddings, avoiding travel and restaurants and even church. First for two weeks, then for a year, and now almost two.

I will be the first to admit that I have not always carried this burden gracefully. I remember a particularly awful day in February of 2021, when the United Kingdom, where I live, was still under a tight lockdown. My husband and I had been trapped in our tiny semi-detached house with two toddlers and a dog for months, and I sat in an armchair by the front window seething at a couple blithely walking by in the rare English sunshine. I wanted nothing more than to take my husband’s hand, walk out of our house and simply forget that we had children for a few hours. But of course I couldn’t, because the strange invisible burdens of parenting and pandemic life are no less important for their seemingly idle nature.

While writing this piece, I called my mom to pick her brain about patience, and with the recall of someone who spent years teaching Latin to Catholic school kids, she reminded me that the root of the word comes from the Latin word patior — I suffer. It’s part of a peculiar subclass of Latin verbs that appear passive but are actually active, offering a fitting parallel to the deceptive power of patience.

It might not look like much, or anything at all, but it has the power to mold human lives as well as save them. The seasons of life we spend waiting are not wasted after all.

As Catholic families go, mine was pretty traditional. The sort that would pile into a maroon Plymouth Voyager and drive an hour and 15 minutes just to attend the Latin Mass on Sundays. We sang a lot of Gregorian chant. We didn’t eat meat on Fridays. And we didn’t celebrate Christmas during Advent. That’s because…

As Catholic families go, mine was pretty traditional. The sort that would pile into a maroon Plymouth Voyager and drive an hour and 15 minutes just to attend the Latin Mass on Sundays. We sang a lot of Gregorian chant. We didn’t eat meat on Fridays. And we didn’t celebrate Christmas during Advent. That’s because…