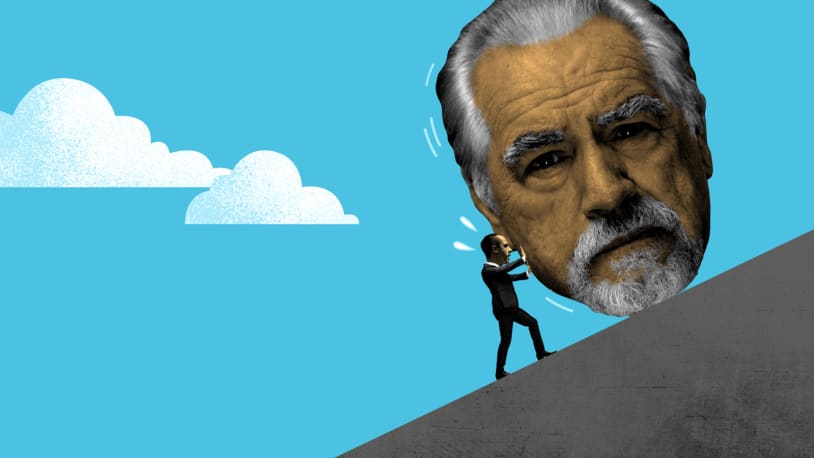 In Sunday night’s Succession season finale, the children of media mogul Logan Roy made their umpteenth attempt to depose their father for control of his ugly, Murdochian empire, only to be once again outsmarted in what has become the show’s defining, Gilligan’s Island-like structure. That they failed, at this point, feels like part of the series design. HBO’s Succession is a Sisyphus fable, except that the audience is expected to root for the boulder being pushed up the hill to roll back over the ostensible protagonists and crush them.

Most of the time, this is more fun than it sounds.

Some critics, though, have made much of this season’s stasis: It begins and ends with yet another futile effort to depose Logan (Brian Cox) from the throne, as a DOJ investigation closed in on the firm’s past malfeasance, only to see everything snap back into the status quo ante. But three years in, Succession‘s narrative sameness seems to be the whole point: When you’re this rich and insulated from accountability, you can literally do anything and never pay for it.

Commanding outsized attention on elite media sites like Twitter due to its incessant inside journalism references and joke-a-minute repartee, Succession depicts the unsavory machinations of a clan of broken, insufferable, incomprehensibly rich weirdos as they jockey for control of a fascist-enabling broadcast kingdom after the sudden decline of the family patriarch. The four scions are hapless in different ways: emotionally stunted, nursing substance abuse problems or impulse control disorders, and notable only for their last names, bereft of any skills that would propel a career in any industry other than institutional nepotism. The narrative momentum is supplied exclusively by their attempts to wrest control of “Waystar RoyCo” (a thinly-veiled stand-in for Rupert Murdoch’s malevolent media empire) from the alternately ruthless and doddering patriarch Logan.

Season three continues the pattern set out by the first two seasons, in which the Roy children play a game of rotating sociopath — at any given time, one of them is being humanized by a sympathetic storyline, while one of the others takes on the role of the most venal person you could possibly have imagined prior to getting hooked on this show. At the beginning of this season, it was black sheep Kendall (Jeremy Strong) who seemed to have made some sort of moral breakthrough, only to descend quickly back into substance abuse, megalomania, and an achingly sad desperation to be cool and relevant.

Meanwhile, Shiv (Sarah Snook), who at one point in season three seemed genuinely tempted to join her brother Kendall in taking their dad out, instead melts down after her grueling public humiliation at Logan’s hands in the sixth episode “What It Takes.” In the penultimate episode, she whispers to her husband Tom (Matthew Macfadyen) that she is better than him and doesn’t love him during some purportedly frothy role-play, before telling him the next day, “Just because I don’t love you doesn’t mean I don’t love you.” Okay!

But despite raising potential opportunities for characters to experience any sort of moral awakening, Succession‘s protagonists keep going around in circles. Once again, Logan gets ill, seems to be on death’s door, then gets better. He throws enough money at his legal jeopardy to make it go away. His toxic brood, all of whom want to be him but none of whom can quite muster his amoral ruthlessness, are unable to cooperate sufficiently to get the job done — nor can they consistently succeed at anything at all. The eldest son, Connor Roy (Alan Ruck), can’t get his trophy rental Willa (Justine Lupe) to marry him or get any ballast for his absurd presidential campaign; Roman Roy (Kieran Culkin) can’t get senior executive Gerri (J. Smith-Cameron) to take him seriously as a love interest; Kendall can’t turn himself into a proper celebrity; and Shiv can’t get Logan to recognize that she is the most capable of the four hateful Roy sociopaths and should thus be designated the successor.

But this season also foregrounded what Waystar RoyCo really is about. Especially in the pivotal sixth episode, where Logan and the Roys jabber with each other at a conservative confab to effectively anoint the next Republican presidential candidate, Succession finally addresses the role that ATN (a thinly disguised Fox News) plays in the right-wing propaganda and radicalization network. Yet as with all of the victims of the Roys’ arrogance and willful blindness, the damage to American democracy wrought by building a network whose sole purpose is the advancement of Republican political power is mostly left to the imagination. In a truly episode-stealing turn, Justin Kirk (whom you may remember from Weeds) plays the creepily genteel fascist Jeryd Mencken, a chef’s-kissable specimen of MAGA slime who is quickly anointed as the preferred Republican presidential nominee in what the attendees only half-jokingly refer to as “the ATN primary.”

Shiv, who of course knows that Mencken is dangerous and argues for a more moderate Republican to win the nomination, initially refuses to be photographed with him, before relenting and saying she just won’t stand next to him in the picture. By the next episode, her scruples over sending the United States into a spiral of authoritarianism are gone. Neither she nor any of the rest of them really care about the consequences of their media empire’s misbehavior. Why would they? Nothing short of an extinction-level asteroid impact could possibly affect any of their day-to-day lives.

By the end of the season, the lack of ideological commitment feels like the show’s most profound message. Here is a band of ultra-rich, overgrown children who oversee a media operation doing genuine damage, every day, to American democracy — and none of them really talk about it. Neither Logan nor any of his offspring seems bothered more than fleetingly by the grandparent-radicalizing scheme they operate. But more damningly, they don’t seem to have an ideology at all. They aren’t right-wing activists forged in some Heritage Foundation retreat, but rather a gaggle of profoundly damaged narcissists with daddy issues whose feckless maneuvers nevertheless have the practical impact of accelerating America’s democratic decline. You could just as easily see them staging a takeover of MSNBC, so divorced is their plotting from any political project that has meaning to them.

In fact, Kendall’s season one manslaughter, Roman’s deadly dabbling in satellites, Connor’s Broadway misadventures, Shiv’s batting her doomed husband around between her paws for sport — none of it ultimately ever has the slightest real-world consequence, and none of these creatures of ultraluxury will ever face so much as a misdemeanor for any of their crimes. In that sense, the show’s aesthetic is reminiscent of The White Lotus, the standout 2021 limited series that similarly satirized one-percenters before ultimately acknowledging that they are beyond accountability.

Audience frustration with this set-up, though, has been palpable in the third season, and this isn’t the first time HBO has had a flagship show almost deliberately defy the audience’s desires — think about the Sopranos finale, or the second season of Westworld, which was so intentionally obtuse in an effort to evade fan sleuths that it became unwatchably convoluted. But going around and around with the Roys means audiences are once again denied the satisfaction of any moral comeuppance or the gratification of an actual, well, succession. And convincing audiences to care about the Roys floundering in place for another season or two is a big ask, no matter how funny it can be.

“I love all three of you pricks,” Logan says to a collection of awful siblings in the finale. The question that Succession raises, and leaves once again unanswered, is whether we are supposed to love them too, as blamelessly shattered humans, or to hate them, as complicit handmaidens of civilizational decline. Maybe, like the “nosy pedestrians” Logan so scorns, we’re not even supposed to ask. Either way, Succession will need to raise the stakes in season four or risk losing its hate-watching audience to the very narcotized indifference its plot satirizes.

December 13, 2021 December 13, 2021 In Sunday night’s Succession season finale, the children of media mogul Logan Roy made their umpteenth attempt to depose their father for control of his ugly, Murdochian empire, only to be once again outsmarted in what has become the show’s defining, Gilligan’s Island-like structure. That they failed, at this point,…

December 13, 2021 December 13, 2021 In Sunday night’s Succession season finale, the children of media mogul Logan Roy made their umpteenth attempt to depose their father for control of his ugly, Murdochian empire, only to be once again outsmarted in what has become the show’s defining, Gilligan’s Island-like structure. That they failed, at this point,…

The Succession finale was brilliant. Time to end the series.