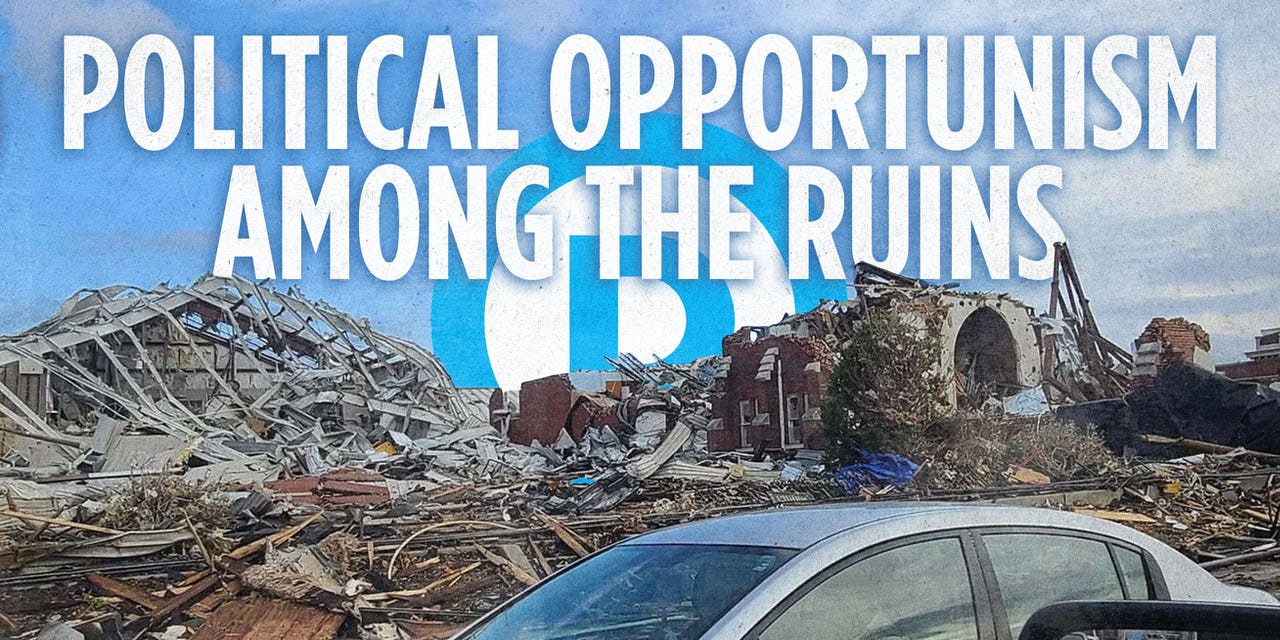 Of Tornadoes and Climate Change

Friday night’s outbreak of deadly tornadoes in the middle of December was tragic. Multiple tornadoes hit Arkansas, Missouri, Tennessee, Illinois, and Kentucky, killing people in each state. One tornado-producing storm cut a path of more than 200 miles across four of those states and could qualify as the longest single tornado tracked in U.S. history. Dozens were killed, though the final toll is not yet known.

This tornado outbreak was more deadly primarily because it struck at night. But big targets also added to the death toll, and authorities are still digging through rubble looking for survivors. The large tornado leveled a candle factory in Mayfield, Kentucky, where more than 100 workers were on night shift, while another tornado ripped through the St. Louis suburb of Edwardsville, Illinois, destroying an Amazon warehouse.

Death and destruction are bad enough without politicizing such things, but leftists routinely cross that line. Blaming these tornadoes on climate change while chastising “deniers” certainly qualifies, and it’s getting about as routine as tornadoes themselves.

In his remarks Saturday, Joe Biden didn’t get into climate until he was prompted by the very first media question: “Mr. President, does this say anything to you about climate change? Is this — or do you conclude that these storms and the intensity has to do with climate change?”

Biden tried to sound measured, but the implication was clear. “The intensity of the weather across the board has some impact as a consequence of the warming of the planet and the climate change,” he said. Biden declined to explicitly blame climate for this tornado outbreak, though he did say, “I’m going to be asking the EPA and others to take a look at that.” Gee, we wonder what conclusion the EPA will reach.

Others in his administration were more assertive: “This is going to be our new normal,” declared Federal Emergency Management Agency Administrator Deanne Criswell. “The effects we are seeing of climate change are the crisis of our generation.”

Leftmedia outlets also added climate questions to coverage of the storms, but the funny thing is that most of them involve saying things like tying climate to storms is “complicated.” For example, ABC says, “Scientists are still trying to sort out the many conflicting factors about whether human-caused climate change is making tornadoes more common — or even more intense.” NBC adds that “meteorologists and climate scientists cannot yet say that tornado frequency is increasing globally due to climate change.”

That ambiguity is, nevertheless, seized upon by everyone on the Left to declare that climate change is affecting storms.

The earth’s climate has changed as long as there has been an earth, and it’s certainly possible that changing climate changes storms.

The problem is that, for Democrats and their allies in the media, just saying the words “climate change” necessarily implies that heavy-handed government response is needed. Biden and congressional Democrats are busy trying to cram through their way-more-expensive-than-advertised Build Back Better scheme, a big part of which is programs derived from the insanely expensive and intrusive Green New Deal. The climate “crisis” is all the justification they need.

Contrary to the pronouncements from the tyrants who use “science” to mandate whatever their preferred policy already was, the science isn’t settled (except that there are only two biological sexes). Even more importantly, science doesn’t dictate anything about the right policy prescription. That’s why Liberty and limited government should be the default.

Democrats never miss an opportunity to generate fear needing their “solutions.” Friday night’s outbreak of deadly tornadoes in the middle of December was tragic. Multiple tornadoes hit Arkansas, Missouri, Tennessee, Illinois, and Kentucky, killing people in each state. One tornado-producing storm cut a path of more than 200 miles across four of those states and…

Democrats never miss an opportunity to generate fear needing their “solutions.” Friday night’s outbreak of deadly tornadoes in the middle of December was tragic. Multiple tornadoes hit Arkansas, Missouri, Tennessee, Illinois, and Kentucky, killing people in each state. One tornado-producing storm cut a path of more than 200 miles across four of those states and…

Study: Black holes’ effect on star formation is more complicated than we thought

Mindfulness: 6 techniques to recenter yourself amid absolute chaos