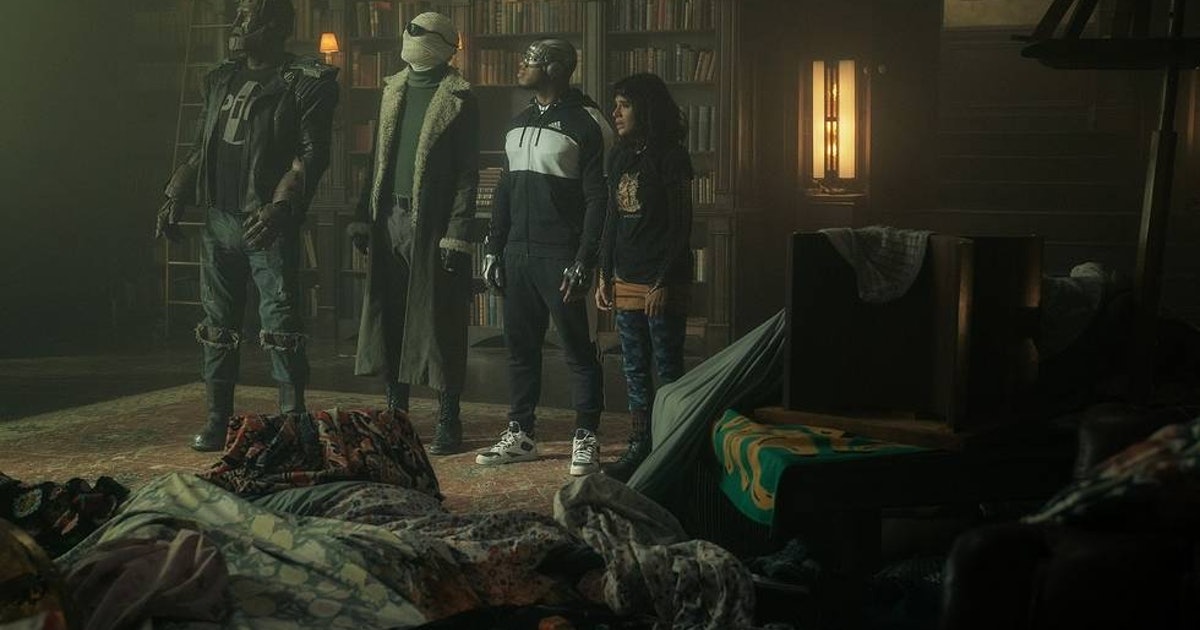 Picture this: Your friends are killed by an intergalactic assassin. You call for help, and a decorated ambulance pulls in. Out walks a girl, named Crystal Palace, and two boys known as the Dead Boy Detectives. They say your friends aren’t dead — just held in a bureaucratic processing plane in the afterlife. It only gets weirder from here.

SCENE STEALERS is a countdown that salutes the unforgettable small-screen characters of the year. The Dead Boys Detectives are #23.

Based on DC comics by the renowned Neil Gaiman and artists Matt Wagner and Malcolm Jones III, the detectives organically vibe with the absurdity of the title team. Not unlike how the Doom Patrol is a dark alternative to the Justice League, the Dead Boy Detectives are macabre Hardy Boys. They solve mysteries for the living and do it with their noses in the air. They’re dead. Nothing matters in the grand scheme. Or does it?

Who is Edwin Payne?

Who is Charles Rowland?

Who is Crystal Palace?

The common foe of the Doom Patrol aren’t always supervillains but their own troubled pasts. The Detectives are similarly haunted. Edwin and Charles’ deaths were just the beginning of their story, leaving them with trauma that keeps their spirits down to Earth. Through shared suffering, deeper feelings develop between the boys.

Edwin and Charles behave indifferently toward the living, but when it comes to one another, we learn what counts as their Kryptonite. In “Dead Patrol,” the two boys aid Negative Man (Matt Bomer), a half-dead superhero kept alive by a cosmic ghost to save his Doom Patrol brethren. When Edwin exhibits compassion for Charles’ fear of water (the latter died from hypothermia in a frigid lake), Negative Man senses something more between them.

Edwin died in 1916 concealing his true self, and Larry relates, also being a closeted gay man from the 1960s. When Edwin was alive, acting on his feelings would have been its own death sentence, and even a century later, he can’t seem to shake off the guilt and shame that remains. Nothing is holding Edwin back now, save for losing his best friend.

“It wouldn’t be normal,” Edwin says, dismissing his feelings.

“Through shared suffering, deeper feelings develop between the boys.”

Edwin, Charles, and Crystal are played by up-and-comers who shouldn’t be forgotten soon. Sebastian Croft, as Charles, is a BAFTA-nominated actor with credits in Game of Thrones and Penny Dreadful; such experience in similarly imaginative programming was a boon for his role in the DC multiverse. Ty Tennant (Tolkien, War of the Worlds), as Edwin, hails from a noble house of actors as the son of Georgia and David Tennant; growing up with the Tenth Doctor proves talent can run in the family. And then there’s Madalyn Horcher as Crystal Palace, whose spots on normcore shows like MacGuyver, The Rookie, and Hawaii Five-0 undoubtedly prepared her for a one-off in Doom Patrol, as evidenced by her lasting impression.

Of the three, it’s Charles who holds the trio together. Edwin’s abrasiveness and Crystal’s third wheeling leaves Croft with a difficult role as Charles. Croft accomplishes his task by contrasting Tennant’s somber Edwin with intelligence, bravado, and humor. He’s the driver of their story, ready to take on any challenge with a backpack comically loaded with weapons. With upbeat delivery of disturbing information, Charles is the proverbial beating heart to the Dead Boy Detectives.

As fate would have it, a spin-off is confirmed! Sadly, they will be recast, a disappointing thing given how much life Tennant, Croft, and Horcher breathe into their mostly-dead characters. Any other show should be green with envy that they don’t have these three. Their chemistry can offset even the most complex narratives of existentialism, spiritualism, and fatalism. Their backstory detailed in Doom Patrol, which involves a runaway demon that holds the memories of Crystal Palace, provides an obvious goal for these characters in their next televised (after)life.

Like the Doom Patrol, the Dead Boy Detectives personify traumas. Their journey isn’t about beating the bad guy but finding growth even when dead. Edwin died in a prejudiced social climate, when expressing one’s true self was counter to cultural norms. Such hatred remains in him now and has led to a closeted afterlife. Even as a ghost, he fears shame. What the Dead Boys Detectives reveal is that if we don’t admit what scares us in life, we’re not really living at all.

Picture this: Your friends are killed by an intergalactic assassin. You call for help, and a decorated ambulance pulls in. Out walks a girl, named Crystal Palace, and two boys known as the Dead Boy Detectives. They say your friends aren’t dead — just held in a bureaucratic processing plane in the afterlife. It only…

Picture this: Your friends are killed by an intergalactic assassin. You call for help, and a decorated ambulance pulls in. Out walks a girl, named Crystal Palace, and two boys known as the Dead Boy Detectives. They say your friends aren’t dead — just held in a bureaucratic processing plane in the afterlife. It only…