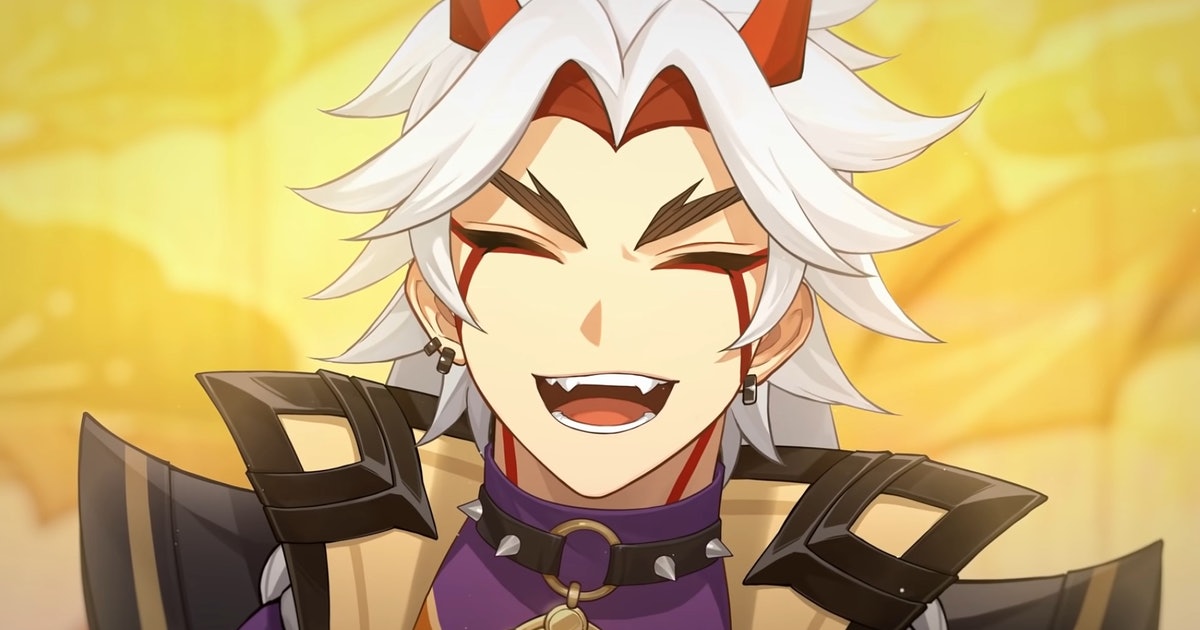 The one and Oni Arataki Itto has finally arrived in Genshin Impact (as of December 14, anyway). Now that the Albedo and Eula reruns have ended, as well as the Shadows Amidst Snowstorms event, the sumo-wrestling, bug-fighting, part-Yokai gang leader has entered the fray, and is ready and raring to crush some foes with his big ‘ol Kanabō. Though he may not offer the same utility as Gorou, who’s arriving alongside him, Itto should still be a potent damage-dealer. If you want to make him as powerful as possible, we’ve got tips for you.

The head of the Arataki gang has a lot in common with one of Genshin‘s greatest underdogs, Noelle, and it’s for this reason I’m convinced he’s going to be very good, even if he doesn’t have the same support abilities in terms of shields and healing. Like Diluc, Itto is also an appealingly straightforward damage-dealer, relying on his normal and charged attacks, which he strengthens with his Raging Oni King state and stacks of Superlative Superstrength.

If you’re looking to get your mitts on either of the new characters, we’ve got both Arataki Itto and Gorou ascension material guides, so you can get them leveled. There are also some tips for beating that pesky Golden Wolflord so you can get Riftborn Regalia. But for now, consider these options for Itto.

While Arataki Itto could be compared to Noelle due to the same Geo weapon infusion he gets from his burst, he’s more of a dedicated damage-dealer, lacking either shields or healing. In fact, his burst state actually decreases his resistance. As with other infusion-based characters like Keqing or Yoimiya, Itto’s greatest strength are his normal and charged attacks.

This is even more the case as he has a special stackable resource called Superlative Superstrength that he gains through normal attacks, his elemental skill, and his burst. He can use these stacks to perform powerful Arataki Kesagiri charged slashes, meaning that his playstyle is a balance of using both normal and charged attacks.

Itto’s burst allows him to enter the Raging Oni King state, where he gains an attack boost that scales with his defense. Once you unlock his ‘Bloodline of the Crimson Oni’ passive, his Kesagiri slashes also deal a bonus 35 percent of his defense as damage.

In this sense, a build that boosts Itto’s defense can get you a lot of value:

The five-star Redhorn Stonethresher claymore is Arataki Itto’s weapon, and it’s pretty much tailor-made for him. It boosts crit damage as a secondary stat, as well as increasing defense by 28 percent, and normal and charged attack damage by 40 percent of overall defense.

There’s already an innate synergy in the weapon, boosting one stat that in turn, boosts another. When Itto enters his burst state, that extra defense increases his attack, which is also added to the extra boost to Kesagiri Slashes from that ‘Bloodline of the Crimson Oni’ skill. You can get the Redhorn Stonethresher on the Epitome Invocation weapon banner that drops alongside Itto.

In terms of artifacts, the new Geo-focused Husk of Opulent Dreams set works well for the Oni. Two pieces increase defense by 30 percent, further boosting that damage output, while four pieces add another stackable resource called Curiosity to the mix. You gain a stack of this by hitting an opponent with a Geo attack, or every three seconds you’re off the field, though a stack will dissipate once every six seconds if you don’t gain any.

Each stack of Curiosity provides a further 6 percent defense boost as well as a 6 percent Geo damage bonus. This should all make Itto’s Raging Oni King state a pretty terrifying thing to behold. You can get the Husk of Opulent Dreams set at the new Slumbering Court domain on Seirai Island.

In terms of artifact stats, you’ll want to prioritize crit rate to make the most of the Redhorn Stonethresher’s crit damage boost, defense to further boost Itto’s damage, energy recharge so he can use his burst consistently, and some HP to increase the health of the bull Ushi during his elemental skill.

As Noelle has been in Genshin since launch, there are already lots of free-to-play weapons and artifact sets that work well for her. Due to the similarities between them and their defense scaling, these should work well for Itto:

Whiteblind is the perfect free-to-play weapon for Itto since it functions kind of like a lower-level version of the Redhorn Stonethresher. Just like Itto’s weapon, its secondary stat is defense, and when you land a normal or charged attack, you gain a 6 percent attack and defense boost for six seconds. This can stack up to four times. The best part is you can forge this yourself with a claymore billet. If you want to go more thematic with the Oni, the Debate Club is one of the best three-star options.

The Husk of Opulent Dreams set isn’t really hard to get, but if you want some lower rarity/more common artifact picks that you’ll probably already have lying around, Defender’s Will and Martial Artist would work. Two pieces of Defender’s Will boost defense by 30 percent—the same as Husk of Opulent Dreams. Martial Artist, on the other hand, boosts normal and charged attack damage by 15 percent. You could also swap this out for two pieces of Archaic Petra and that 15 percent Geo damage bonus.

And that’s our best Genshin Impact Itto build. May all you Itto wanters become Itto havers.

The one and Oni Arataki Itto has finally arrived in Genshin Impact (as of December 14, anyway). Now that the Albedo and Eula reruns have ended, as well as the Shadows Amidst Snowstorms event, the sumo-wrestling, bug-fighting, part-Yokai gang leader has entered the fray, and is ready and raring to crush some foes with his…

The one and Oni Arataki Itto has finally arrived in Genshin Impact (as of December 14, anyway). Now that the Albedo and Eula reruns have ended, as well as the Shadows Amidst Snowstorms event, the sumo-wrestling, bug-fighting, part-Yokai gang leader has entered the fray, and is ready and raring to crush some foes with his…