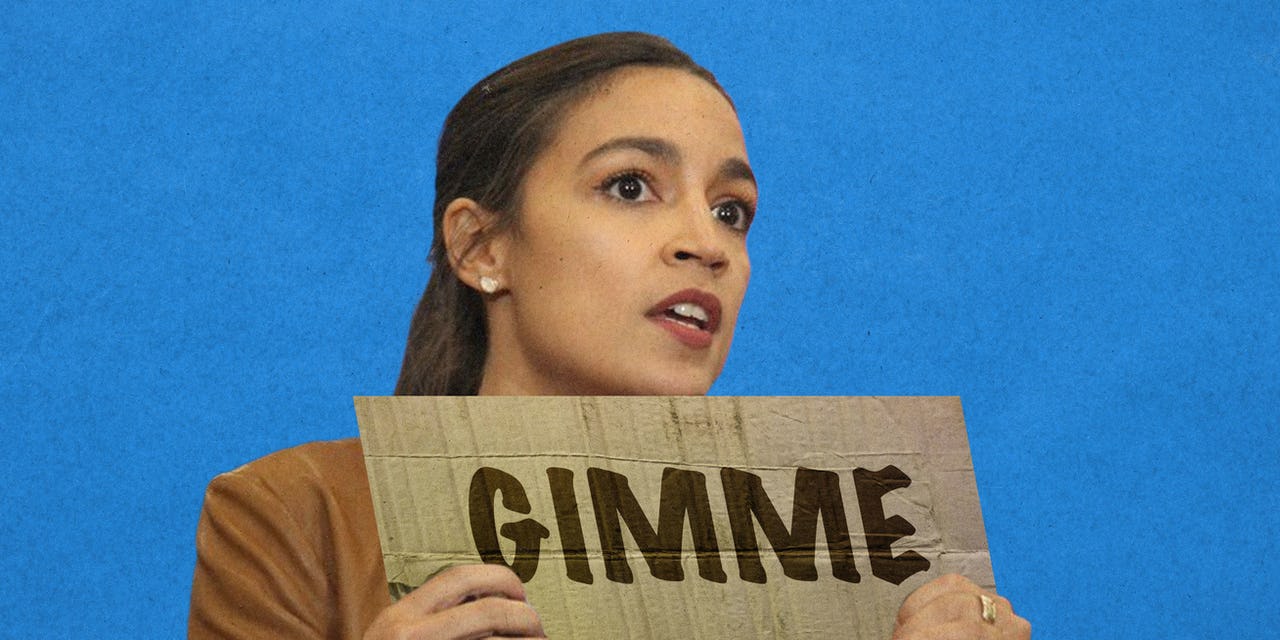 AOC Wants You to … Repay Her Student Loans

By THOMAS GALLATIN December 13, 2021 in Entitlements

In a recent speech on the House floor, socialist Democrat Representative Alexandria Ocasio-Cortez once again called for “student debt cancellation.” Why? Because she doesn’t like repaying it. At age 32, she still owes “over $17,000 in student loan debit, and I didn’t go to graduate school because I knew that getting another degree would drown me in debt that I would never be able to surpass.” She then lectured, “This is unacceptable.”

Really? AOC believes it’s unacceptable that students, who freely choose to incur low-interest debt by obtaining a student loan in the first place, should be expected to repay their loans? Does AOC believe that people who incur debt for a car loan should be off the hook for having to repay them? After all, the vast majority of working Americans need a vehicle to hold down a job and to simply live life in our modern mobile society. And car loans — especially for used cars — often have a higher interest rate than do those oh-so-burdensome student loans. Don’t even get us started on mortgages.

As a U.S. representative, AOC pulls in an annual taxpayer-funded salary of $174,000 — over twice the average annual U.S. household income. Rather than be content paying off her student loans, which would likely cost a couple hundred bucks per month out of her monthly salary of $14,500, she would rather have taxpayers foot that bill too.

AOC erroneously claims that canceling student loan debt would help low- and middle-income Americans. “Come on!” she says. “If you are taking on student loan debt, it’s because you are likely a middle- or working-class person. Let’s get real. Let’s cancel it.”

But even the left-leaning Urban Institute isn’t buying AOC’s analysis. In fact, it recently observed just the opposite: “Debt forgiveness plans would be regressive — providing the largest monetary benefits to those with the highest incomes.”

Fellow Squad member Rashida Tlaib (D-MI) sought to inject her own sob story in this debate. “I worked full time, Monday through Friday, and took weekend classes to get my law degree,” she whined. “And still, close to $200,000 in debt. And I still owe over $70,000 and most of it was interest. And guess what? I didn’t go to the for-profit entities, I went to legal aid, I worked at the nonprofit organization fighting for the right to breathe clean air, to fight for the worker that was getting their wage taken and stolen from their employer. I went and worked on immigrant rights and so much more.”

She was a good left-wing activist, in other words, and you, dear taxpayer, now owe her.

To put it bluntly, what AOC and Tlaib are advocating is legalized theft. Being socialists, of course, they don’t believe that individuals really own anything — even their own labor. Nope, the government owns it all.

At the rotten root of their ideology one finds envy and resentment of other people’s success. Seeing that someone using hard work, skill, and industriousness has accumulated more wealth than another, the socialist concludes this is unfair because everything and everyone is not the same. Ultimately, socialism is childish and insecure. It removes all personal responsibility and culpability from the individual and lays it all at the feet of society, which is precisely why childish and immature individuals like AOC and Tlaib are so drawn to it.

Finally, the deeper issue here with the whole push to cancel student loans is an inherent attack on the capitalist concept of investment. The main reason people choose to go to college in the first place is to invest in themselves by enhancing their own knowledge and abilities, often including the goal of becoming more economically successful in their career endeavors. Canceling student loans removes the all-important concepts of both boundaries and incentives. If something is free, it loses value and may become resented. And free stuff for resentful people means more Democrat voters. That’s the real play here.

By THOMAS GALLATIN December 13, 2021 in Entitlements In a recent speech on the House floor, socialist Democrat Representative Alexandria Ocasio-Cortez once again called for “student debt cancellation.” Why? Because she doesn’t like repaying it. At age 32, she still owes “over $17,000 in student loan debit, and I didn’t go to graduate school because I knew…

By THOMAS GALLATIN December 13, 2021 in Entitlements In a recent speech on the House floor, socialist Democrat Representative Alexandria Ocasio-Cortez once again called for “student debt cancellation.” Why? Because she doesn’t like repaying it. At age 32, she still owes “over $17,000 in student loan debit, and I didn’t go to graduate school because I knew…

How political campaign emails fan the flames of the misinformation fire