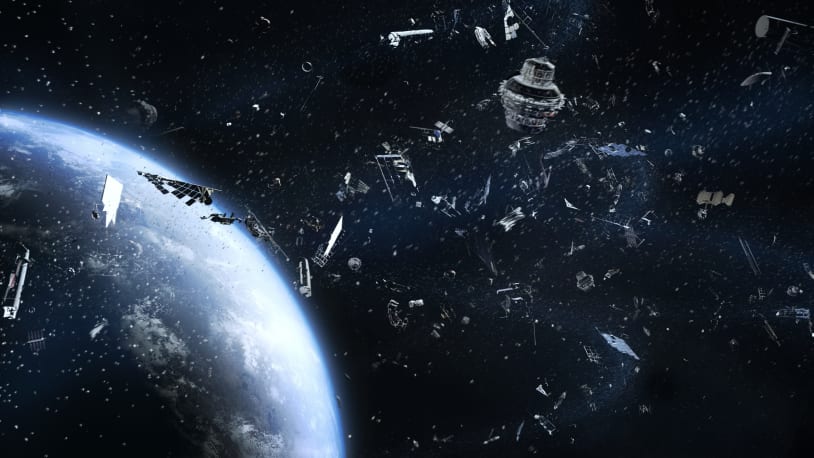 The war in orbit | The Week

A recent Russian anti-satellite test created a dangerous cloud of space debris and raised the risk of war in space. Here’s everything you need to know:

What was Russia’s test?

To assess and demonstrate its ability to blow up U.S. satellites, Russia launched a missile from the ground that flew 310 miles up into space and blew up a 2-ton, Soviet-era surveillance satellite in low-Earth orbit. The explosion created a cloud of shrapnel that will threaten satellites and humans in space for decades to come. American, German, and Russian astronauts on the International Space Station, at an orbit 60 miles below the satellite, had to shelter in transport capsules for hours, ready to evacuate in case of collision. The explosion doubled the number of objects in the most highly traveled region of near-Earth orbit, sending 1,500 pieces of debris larger than 2 inches and hundreds of thousands of smaller fragments hurtling around the planet at 17,000 mph—much faster than a bullet. A single paint fleck moving at that speed can severely damage a commercial or government satellite, while a pebble-size chunk could destroy one, or instantly kill an astronaut on a space walk. NASA administrator Bill Nelson said he was “outraged by this irresponsible and destabilizing action.”

Why did Russia do this?

Russia is not the first state actor to test anti-satellite technology: The U.S., China, and India have all done so in years past. But it is the first to generate so much debris in this highly used level of orbit. As a direct result, every maneuverable object currently in low-Earth orbit will have to perform avoidance maneuvers whenever debris comes close, which takes them offline and wastes their fuel. The dollar cost to all actors in space will be immense. Analysts said it’s no accident that President Vladimir Putin chose this moment, when Russian troops are massing off the Ukrainian border and NATO is threatening sanctions, to demonstrate Russia’s ability to destroy the satellites the U.S. military relies on to communicate among troops and guide its own bombs to their targets. The test comes against a background of a lot of lower-level Russian aggression in space.

What kind of aggression?

Gen. David Thompson, second-in-command of the Space Force, said last week that both Russia and China have been repeatedly launching “reversible attacks” that temporarily disable but do not destroy U.S. satellites. Many are cyberattacks, while others include jamming satellite signals with competing radio frequency signals and temporarily blinding satellite optics with lasers. Last year, Russia tested a “nesting doll” satellite that opened up and released a smaller craft capable of shooting a projectile — proof that it is seeking the ability to destroy enemy satellites from space. China, meanwhile, is developing Shijian-17, a satellite with a robotic arm designed to grab and disable enemy satellites without blowing them up. “The threats are really growing and expanding every single day,” Thompson told The Washington Post. “We’re really at a point now where there’s a whole host of ways that our space systems can be threatened.”

There are nearly 3,400 active satellites in orbit. Any one of them is theoretically at risk. These include the military satellites that the U.S. uses for crucial intelligence gathering, such as early warning of nuclear missile launches. Other satellites in low-Earth orbit, where the Russian test occurred, include the Hubble Space Telescope, mapping satellites, and a proliferating number of commercial satellites. Medium-Earth orbit contains many navigation satellites, while most of the world’s telecommunication and GPS satellites tend to be further up, at 22,000 miles, in geostationary orbit. Russia warned last week that it could destroy 32 GPS satellites, which would cause chaos in the U.S.

Can Russia be punished for littering?

Probably not. The framework governing the military use of space is the outdated 1967 Outer Space Treaty, which says countries can’t station nukes or other weapons of mass destruction in space and requires them to use space without leaving “harmful contamination.” Space X, whose Starlink array of internet satellites is now jeopardized by the Russian debris field, could in theory bring a lawsuit, but there’s not much precedent for one. The only time a country paid a price for its actions in space was in 1978, when Russia paid $2.36 million after chunks of a reconnaissance satellite fell to Earth, scattering radioactive material across northern Canada.

Will there be a new treaty?

Many are now calling for one. Not only is there yet no ban on creating debris, but there isn’t even an international system to monitor satellite traffic. Currently, satellite providers voluntarily send emails to alert each other to near passes. Some analysts warn of a future in which the realm beyond Earth’s atmosphere becomes so cluttered as to be unusable. “If we fail to design rules that prevent our orbital activity from becoming self-defeating and destructive,” says former NATO Secretary-General Anders Fogh Rasmussen, “we will soon find we have squandered another of Earth’s greatest resources.”

A recent Russian anti-satellite test created a dangerous cloud of space debris and raised the risk of war in space. Here’s everything you need to know:  What was Russia’s test? To assess and demonstrate its ability to blow up U.S. satellites, Russia launched a missile from the ground that flew 310 miles up into space…

A recent Russian anti-satellite test created a dangerous cloud of space debris and raised the risk of war in space. Here’s everything you need to know:  What was Russia’s test? To assess and demonstrate its ability to blow up U.S. satellites, Russia launched a missile from the ground that flew 310 miles up into space…

Palestinians vote in municipal elections as support for Abbas slips