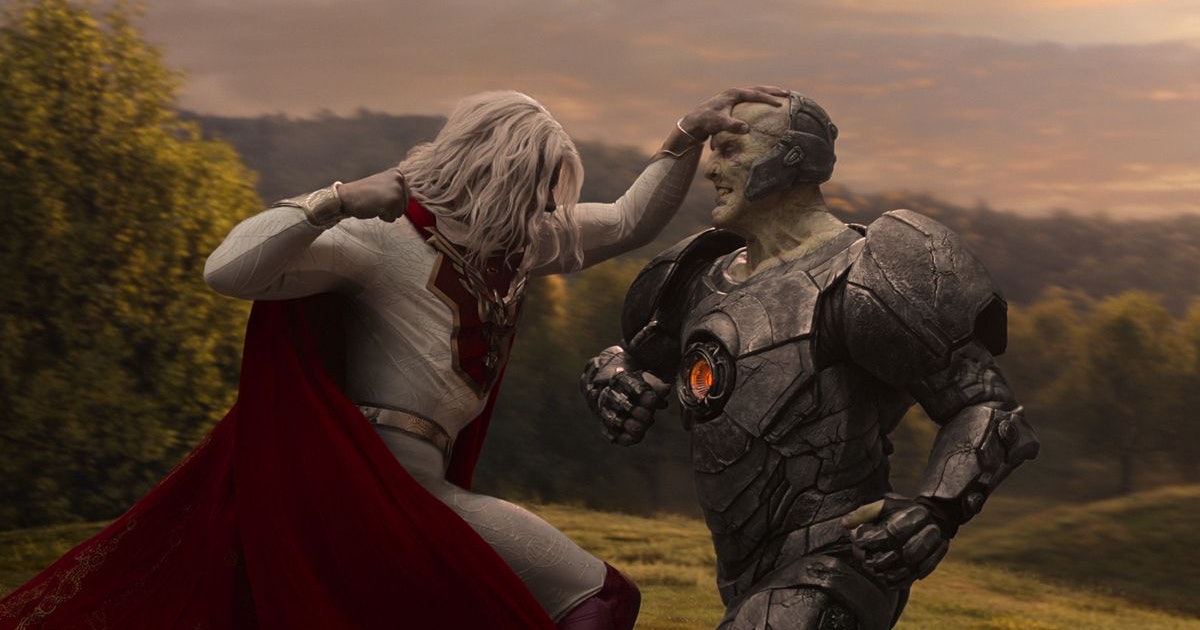 The second time we meet Blackstar in Netflix’s Jupiter Legacy is also the first time. It’s complicated. Basically, he is a clone, and when the clone is crushed like a Halloween pumpkin by superheroes, the real Blackstar enters the frame.

In Jupiter’s Legacy Episode 2, “Paper and Stone,” viewers meet Blackstar, and we’re drawn to his disturbing essence and swagger. Played by Tyler Mane, Blackstar shuffles into a supermax examination room like an elderly coroner on steroids to inspect his dead clone. With a bemused look on his face and granny glasses on his nose, there’s a sardonic vibe that bonds us to him. The surreal visual isn’t lost on the others in the room — iconic superheroes who make up the “Union of Justice.” Blackstar, who looks like a lost cousin of Thanos, mockingly declares this thing on the table is not him.

“Somebody’s screwin’ with you,” he barks. “Check that thing’s ass for a Made in China.”

SCENE STEALERS is a countdown that salutes the unforgettable small-screen characters of the year. Blackstar is #26.

It’s hard to come up with a more shocking cancellation than Netflix’s Jupiter’s Legacy. After its inaugural season in the spring of 2021, creative differences between Netflix and producer Steven DeKnight (Daredevil, Spartacus) led to the plug being pulled — the bad reviews didn’t help either. As a result, much of Mark Millar and Frank Quitely’s original comics material remains unseen and unresolved on the screen.

But the series did have a slew of standout characters that added depth the comics lacked. One of them was certainly Blackstar. Sure, he was responsible for the extinction of an alien race and destroyed half of Missouri, but that’s what angry alien warlords do. When one harnesses the power of a supernova in their chest, you want to let that weapon air out once in a while.

Former WCW wrestler Tyler Mane is no stranger to scenery-chewing roles, having also played Sabretooth in 2000’s X-Men and Michael Myers in Rob Zombie’s Halloween films. He portrays Blackstar as hyper-intelligent, with charismatic charm to counter his imposing stature and intense physicality.

Mane’s muscled physique and dramatic posturing — a holdover from his days as a superstar wrestler — aided him well as Blackstar. Sabretooth and Michael Myers were mostly silent villains who displayed emotion through physical savagery. The Halloween slasher was devoid of anything resembling humor, but Sabretooth did exhibit a personality like Blackstar’s, growling and grunting with similar confidence against superheroes.

Mane found a lot to like in Blackstar. After landing the role, he collected Jupiter’s Legacy comics for research, only to find an undersupply of Blackstar. This allowed him to fill the void with, well, himself. “When I just read [the script], I said, ‘Okay, that’s a lot like me,’” he told Comic Book Resources. “I can seem a little cocky, sarcastic, snide. And then you add in the intelligence, the power … you’ve got the great, ultimate supervillain.”

In an interview for Nerds and Beyond, Mane reasoned that his own upbringing being bullied left him with a chip on his shoulder like Blackstar. “Supervillains … they’re a product of their environment,” Mane said. “I was a tall skinny kid with glasses and braces that was slightly dyslexic and picked on, so I developed this mentality that I’m going to prove myself and that’s kind of the same sort of mentality that Blackstar has. He’s gonna prove that the code is, frankly, a bunch of BS because morality is not black and white.”

“He’s just too much fun to ever forget.”

From the first electrifying moment he appears to the finale, Blackstar is an unstoppable maniac injecting every second of screen time with an addictive menace. Like a petulant, energy-blasting cousin of DC’s Darkseid, Blackstar is a control-hungry juggernaut whose presence makes caped crusaders shudder. It literally takes an entire squad to subdue the big guy. It’s bittersweet to think that we’ve seen the last of Blackstar.

In a perfect world, we haven’t. Blackstar’s character has enough to make up a theoretical resurrection spin-off. Maybe a ‘90s-style, Seinfeld-like sitcom where the former mass murderer is now a force for good after an epiphany one Christmas Eve. Now he’s using his scientific genius to engage the brightest minds at MIT to develop new sources of clean energy by day, and running a no-kill animal shelter in Boston on the weekends. He’s just too much fun to ever forget.

While Mane’s days as Blackstar are likely over, we’re grateful for what little we got and will remember his awesome might, snide smile, and softer side that wears Aunt Lucy’s spectacles. Blackstar represents the purest form of expression without limitations. A living recipe of ego, gravitas, animal magnetism, and gallows humor, Blackstar impresses with his will to dominate. In today’s social media where everyone’s comments and thoughts are tools and weapons, it’s liberating to see a character embrace his own deranged agenda, regardless of the repercussions.

The second time we meet Blackstar in Netflix’s Jupiter Legacy is also the first time. It’s complicated. Basically, he is a clone, and when the clone is crushed like a Halloween pumpkin by superheroes, the real Blackstar enters the frame. In Jupiter’s Legacy Episode 2, “Paper and Stone,” viewers meet Blackstar, and we’re drawn to…

The second time we meet Blackstar in Netflix’s Jupiter Legacy is also the first time. It’s complicated. Basically, he is a clone, and when the clone is crushed like a Halloween pumpkin by superheroes, the real Blackstar enters the frame. In Jupiter’s Legacy Episode 2, “Paper and Stone,” viewers meet Blackstar, and we’re drawn to…