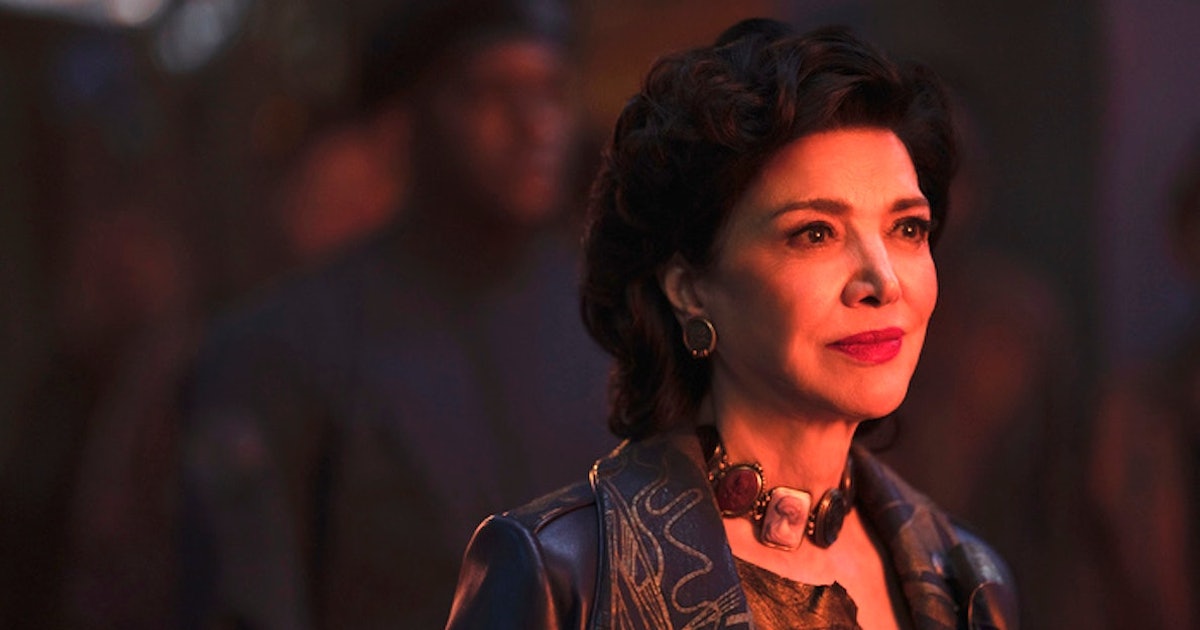 As The Expanse begins its sixth and final season, Aghdashloo tells Inverse that when she first took the role in 2014 she felt lucky: “Had I not studied [political science] it would have been really hard.” Now, at the end of the journey, Aghdashloo reflects on the power of The Expanse and why Chrisjen Avasarala has changed the real world too.

Mild spoilers ahead for The Expanse Season 6.

Even before The Expanse became a TV series — initially for the SyFy Channel, then for Amazon — Chrisjen Avasarala was a fan favorite among readers. Written by Daniel Abraham and Ty Franck under the shared pseudonym James S.A. Corey, the books didn’t introduce Avasarala until the second novel in 2012. But on TV, she’s been there since day one, and without the grey hair described by Abraham and Franck.

The appeal of Avasarala for contemporary sci-fi viewers is simple. She’s not a twenty-something fighter but a seasoned politician, navigating the complex relationships of the various factions in The Expanse, from Earth to Mars, the Belt, and the infamous Outer Planets Alliance. Speaking ahead of Season 6, Aghdashloo says that when she first began playing Avasarala, she relied on her knowledge of political science to imbue the character with authenticity.

“All the powerful females in key positions were in my head,” Aghdashloo says. “Margaret Thatcher, Nancy Pelosi, Hillary Clinton.”

Aghdashloo is a woman of color. Her name is Persian and she identifies as Iranian-American. Considering The Expanse presents a variety of cultures projected into a convincing future, Avasarala’s role is an essential component to the show’s authenticity.

But for Aghdashloo herself, the job is bigger than just checking off a box. When speaking on the importance of representation in The Expanse, specifically for women, Aghdashloo is precise:

“It is not just [me] but the other powerful female roles in this series. We give a lot of hope to young women all around the world. Yes, we can. We are capable of holding key positions in this new world. With my character, what I love and what the audience takes from it everywhere — including young girls in the Middle East or in the other half of the world — who might not have access to our work. But when they watch me on this series, they think, ‘Oh, if she could make it, I can make it too.’”

The Expanse isn’t Aghdashloo’s only foray into science fiction. In the middle of the first two seasons, she appeared in 2016’s Star Trek Beyond as Commodore Paris, Captain Kirk’s boss at Starbase Yorktown. In 2021, she lent her voice to the Netflix hit Arcane, and she played the iconic role of Gozer in Ghostbusters: Afterlife. Based on her many convention appearances, it’s clear she’s comfortable existing as an icon for multiple fandoms.

“I love, love, love interacting with the fans,” Aghdashloo gushes. “Sometimes they know more than I do about a certain story or a different character.” Aghdashloo adds that her support of The Expanse extends to recruiting new fans, sometimes in high places.

“I was talking to a friend of mine who’s a member of the Labour Party in the UK, who was not in favor of science fiction,” she says. “I said, this is a serious take on science fiction. This is very real. You need to watch it because you’re gonna learn a lot from it, no matter who you are, where you are.”

What about all of Avasarala’s weaponized swearing? Does Aghdashloo ever feel like it’s too much? When asked, she laughs, and it feels impossible that the dignified Shohreh Aghdashloo would ever use profanity. But she makes it clear that she’s proud of the character’s intensity, and she got the ultimate validation from the people who created Avasarala.

“For the first three seasons, I was pretty confident that I was doing the right thing because nobody was telling me that I was doing it wrong. You know, I was sort of comfortable with that position,” she says. “But at one point, I had to ask the novelists. I went to Ty Franck and I said, ‘Ty, you never told me, am I doing this right?’ And he looks at me and he goes ‘You’re better than what we thought or what we put in the books. You’re more.’”

The Expanse Season 6 is streaming now on Amazon.

The best character in The Expanse swears all the time. As the formidable Chrisjen Avasarala, actress Shohreh Aghdashloo forged a new archetype for science fiction badasses. Avasarala doesn’t defeat people with flip-kicks or futuristic weaponry; she’s a shrewd politician and complex leader who isn’t always 100 percent “good.” As The Expanse begins its sixth and…

The best character in The Expanse swears all the time. As the formidable Chrisjen Avasarala, actress Shohreh Aghdashloo forged a new archetype for science fiction badasses. Avasarala doesn’t defeat people with flip-kicks or futuristic weaponry; she’s a shrewd politician and complex leader who isn’t always 100 percent “good.” As The Expanse begins its sixth and…

With 12 days till launch, the James Webb Telescope moves to a critical stage