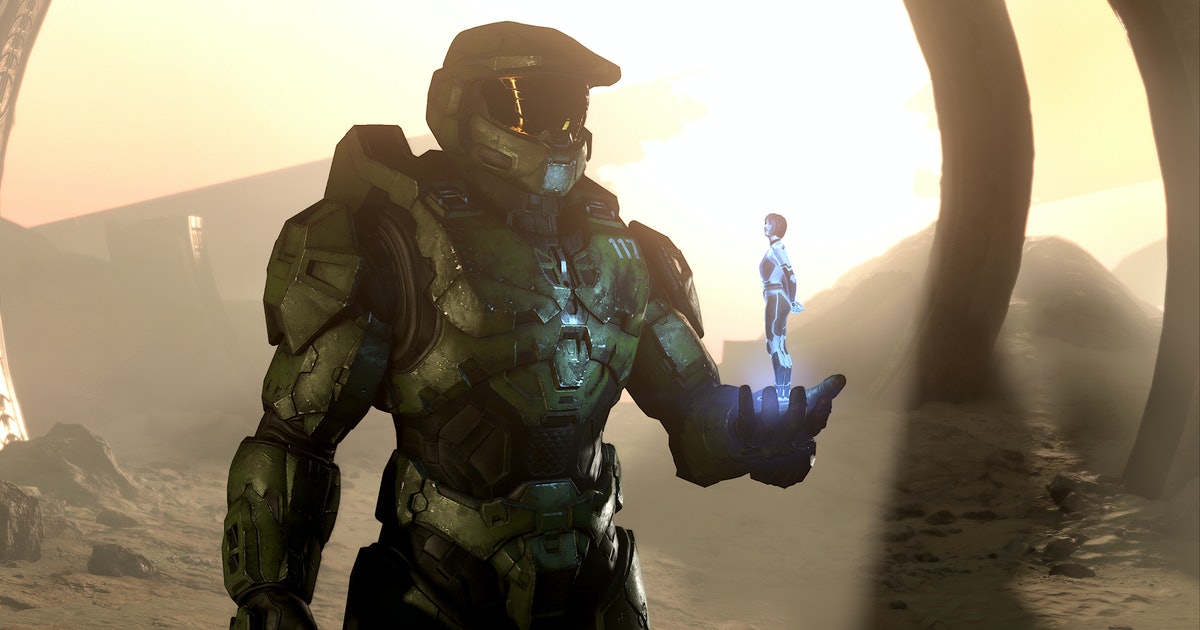 If you knew how you were going to die, would you live your life differently? It’s a question posed by Master Chief’s latest adventure in Halo Infinite. The answer — direct and otherwise — signal both an end and a new beginning for the franchise.

What really happened on Zeta Halo? What does it mean for Master Chief and the future of Halo? Is the Brute with the beard Atriox, or is that Escharum? These are the profound questions raised by Halo Infinite, and not all of them are answered when the credits roll.

Here’s an extensive breakdown of the game’s ending and what it means for the series moving forward.

We learn pretty quickly during Halo Infinite’s campaign that terrible things have happened on Zeta Halo: The UNSC forces are in shambles after a months-long war against the Banished led by Atriox and Escharum. An early flashback shows how Atriox defeated Master Chief in battle and hurled him out into space. Months later, a bearded pilot discovers and revives him.

7. Who is the Pilot in Halo Infinite?

For much of the game, the frantic bearded pilot goes by the callsign Echo-216 (which refers more directly to the Pelican ship he flies), and it isn’t until the ending that he reveals his name: Fernando Esparza. As a reveal, it feels a bit weird. Why both hiding his name at all?

Fernando had a wife and child (as depicted in a hologram memory recording that pops up a few times in the game) and was just a regular guy who stole a UNSC ship and posed as a marine. We are meant to recognize ourselves in Fernando, a scared human amidst a war with monstrous aliens on a terrifying ring world. Master Chief is human, but he’s a superhero who rarely speaks. Fernando puts a human face and heart to the drama at hand.

He’s also one hell of a pilot who sticks around through the ending to become Chief’s new best friend.

6. What is “The Weapon” in Halo Infinite?

One of the very first things Master Chief does during Halo Infinite is venture to an installation on Zeta Halo where he retrieves “The Weapon.” This is a blue artificial intelligence that looks and talks similar to Cortana, the AI that partners up with Chief back in the original Halo: Combat Evolved. She also lives inside a computer chip in Chief’s head, but this time around, things are a little different.

The Weapon has a cheery and mostly juvenile demeanor, and we eventually learn that she’s essentially a copy of Cortana made as a failsafe. If Cortana ever went rampant (which she did), this Weapon was created to delete Cortana and then delete herself. Except she’s still alive instead. She functions as Master Chief’s ride-along companion for the entire game, offering helpful tactical advice and hacking into installation hardware.

The Weapon learns of her dark legacy as another Cortana, which helps her forgive the Chief when he tries to delete her with some verbal cues. In the end, they reconcile their differences and form a permanent partnership, with the Weapon assuming the name she chooses for herself: Cortana.

5. What happened to Cortana in Halo Infinite?

Here’s where things in Halo Infinite get super complicated. Cortana is dead and gone. But remnants of her data linger in clusters in the air like magical bits of aether. So, every now and then, Master Chief hears Cortana whispering things like “If you knew how you were going to die, would you live your life differently?” At times, you’ll see entire scenes play out in the form of hardlight memories.

Most AI in the Halo universe live for less than a decade to prevent a sickness called “rampancy.” Essentially, an excessive amount of information can drive an AI to madness. This began happening to Cortana in Halo 4. She sacrificed herself to save Master Chief at that game’s conclusion, but a fragment of her survived as a power-hungry, purple megalomaniac in Halo 5: Guardians. She built an army of “Created” to take over the universe. The last we saw of her, she was about to take over Earth.

Towards the end of Halo Infinite, we learn that Cortana also destroyed the homeworld of Atriox, the leader of the Banished. (This probably happened after Halo 5 but before Halo Infinite.) The specifics get a bit murky, but it seems like that’s what drove Atriox and the Banished to Zeta Halo to begin with: So he could successfully destroy Cortana.

4. What happens to Escharum in Halo Infinite?

Despite the fact that Atriox was the last known leader of the Banished, a different Brute called Escharum is their current War Chief who spends much of Halo Infinite taunting Master Chief via red holograms. He’s got a bit of a wheezing cough whenever we see him in his lair, and the one clear goal he has is to fight Master Chief to the death.

Escharum seemingly has the Brute equivalent of lung cancer, but he’d rather die in the glory of battle. Lucky for him, Chief delivers just that as part of the game’s penultimate boss encounter.

Atriox’s goals are a bit muddled outside of this, but he talks a lot like Thanos from the Marvel movies with sweeping generalizations about inevitability and destiny. In the end, he says his death will inspire many more to rise up — and he’s probably right.

3. What happened to Atriox in Halo Infinite?

Anyone who’s kept up with previous Halo games is probably wondering why War Chief Escharum is the leader here rather than Atriox, who founded the Banished when he defected from the Covenant years ago. In the flashback cinematic, it’s Atriox who tosses Master Chief into outer space, seemingly killing him, instead of Escharum.

Because Atriox MIA months later when the main action of Halo Infinite picks up, it seems like he might be dead. Halo Infinite waits until the post-credits scene to show us that the bearded Brute is alive and well.

He appears deep inside some kind of Forerunner structure. Is it on Zeta Halo or one of the other rings? We don’t know where or what he’s doing exactly, but we know it must be bad. He interacts with some kind of console, and a bunch of brick-like pieces spin around the room. Could this have something to do with the Harbinger’s mission?

Chances are high that this will trigger the next big threat Master Chief will have to face down the line.

2. Who is the Harbinger in Halo Infinite?

Halo Infinite presents the spindly Harbinger as a tenuous ally to Escharum and the Banished on Zeta Halo. She seems to share some kind of relationship with the Forerunners and the Precursors that created them. When Master Chief first encounters her, she teleports around and sends him crashing through a nearby forest using space magic. She doesn’t care much for the Banished but is content to use their help trying to access the Zeta Halo network.

But to what end?

In the final boss fight, Master Chief confronts her at a location called “The Silent Auditorium.” She describes it as the place where the Forerunners condemned a species called “The Endless” to eternal imprisonment. Halo Infinite explains very little about the Endless, but there are some possibilities, but it’s her goal to free the Endless. Is she herself an endless? Or something else? We never really learn the truth.

1. What are “The Endless” in Halo Infinite?

One thing we do know is that the Endless could be worse than the Flood. Based on the hints, Forerunners versus the Endless feels a bit like the Greek gods versus the Titans. There was some kind of war, and after winning, the Forerunners/Greek gods imprisoned their foes indefinitely. Yet they couldn’t be killed outright, so their eventual escape was inevitable.

It seems possible that the Harbinger herself is one of the Endless, and her goal is merely to free her people from eternal torment. If true, that would be pretty terrifying. While overwhelming, the Flood are basically just brainless zombies. An army of highly intelligent and seemingly immortal flying aliens with enough space magic to teleport around and wield telekinesis? Yeah, that sounds pretty bad!

The strange way the Harbinger talks of the Endless, however, implies that they could be something else entirely. “Harbinger” literally means “a person or thing that signals the approach of another,” which is annoyingly synonymous with “forerunner.” Given the fact that Halo Infinite is being billed as a “live service” game, however, it seems like the story of the Endless will be told at some point in the not-so-distant future. If the Harbinger is a harbinger for the Endless, does that mean she IS an Endless or something else? We simply don’t know yet.

One thing’s for sure: The “infinite” in Halo Infinite is starting to make a little bit more sense.

If you knew how you were going to die, would you live your life differently? It’s a question posed by Master Chief’s latest adventure in Halo Infinite. The answer — direct and otherwise — signal both an end and a new beginning for the franchise. What really happened on Zeta Halo? What does it mean…

If you knew how you were going to die, would you live your life differently? It’s a question posed by Master Chief’s latest adventure in Halo Infinite. The answer — direct and otherwise — signal both an end and a new beginning for the franchise. What really happened on Zeta Halo? What does it mean…