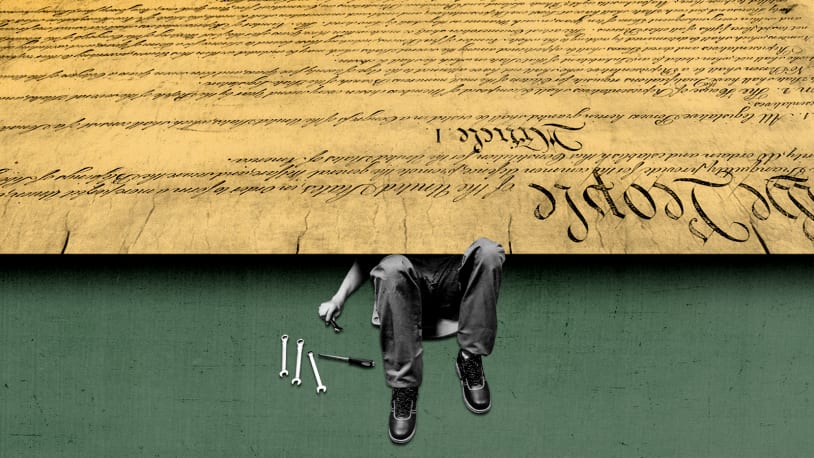 Hacking the Constitution is a dangerous, bipartisan game

There’s a new variant of partisan suspicion in America: The other side refuses to play by the rules and must be stopped at any cost or our country as we know it is over.

Whether America is really on the brink of catastrophe may be debatable, but the rulebreaking critique has truth to it, and both sides are right that the other is guilty. Republicans and Democrats alike are “hacking” the Constitution, upending longstanding procedures and policies when the rules mean they lose. They’re evading public scrutiny and accountability and further corroding confidence in government and other essential institutions.

The hacks I have in mind are things like Senate Bill 8 (SB8), the Texas heartbeat act, passed by a Republican legislature and signed into law by GOP Gov. Greg Abbott. Challenges to the law are now under review by the Supreme Court, and the justices may hand down their decision at any time.

SB8 bans most abortions performed after roughly six weeks of pregnancy. What makes it unusual, compared to something like the Mississippi law outlawing abortions after 15 weeks that the court considered last week, is the mechanism of enforcement. SB8 lets any U.S. citizen (not just Texans) file a civil lawsuit for $10,000 in damages against abortion providers and anyone else who enables a pregnant woman to get an abortion in Texas after the sixth week of pregnancy.

The government doesn’t pursue legal action against abortion providers and enablers, as it would do were abortion criminalized. Instead, the lawsuits are filed by private citizens against other private citizens.

Wherever you stand on the abortion debate, this legal hack is insidious. It could be replicated to directly attack any federal constitutional right, including many less controversial than abortion. It sidesteps constitutional protections by encouraging ideological adversaries to become bounty hunters.

Some of these laws are innocuous, and each one should be judged separately, but the overall trend is concerning. Some may recklessly punish officials for innocent mistakes, and though vigilance is in order, there’s also risk in paranoid reaction to imagined threats. The Washington Post reports that diehard supporters of former President Donald Trump are moving to place allies on state and local elections boards, perhaps enabling questionable “audits” and other challenges to 2022 and 2024 election results. The paper has also covered Trump-backed secretary of state candidates in several states who’ve hinted they might refuse to certify election results they don’t like, sowing uncertainty that could lead to chaos.

Finally, something bizarre is unfolding in North Carolina, my home state. Progressive activists led by the NAACP have asked justices on the state Supreme Court to forcibly and illegally block two of their colleagues from ruling on a lawsuit. The case challenges two constitutional amendments — a voter ID requirement and an income tax cap — which the Republican-led state legislature placed on the ballot in 2018. Voters approved them by comfortable margins.

In North Carolina, however, judges are elected in partisan races, and the two justices in question, Phil Berger Jr. and Tamara Barringer, are Republicans. Berger Jr.’s father is the powerful president pro tem of the state Senate, and Barringer was in the legislature when the amendments were put on the ballot. The NAACP says they have a conflict of interest and can’t judge the case fairly.

But the case isn’t a straight assessment of the amendments’ merit, a scenario in which partisan alignment would more naturally raise questions. It’s an arcane dispute about how they got on the ballot, a debate over a causal chain involving the 2016 legislative districts, which were later declared unconstitutional, and whether that in turn renders any measure from the resultant legislative session illegitimate. And anyway, voters, not GOP lawmakers, were directly responsible for adding the amendments to the state constitution.

Beyond those factors, the NAACP suit should be a nonstarter because North Carolina’s constitution offers no option of involuntarily removing a Supreme Court justice from a case (other than impeachment, which isn’t the request here). Recusal is voluntary, and Berger and Barringer already declined to recuse themselves, as is their right. (Democratic Justice Anita Earls, former director of the Southern for Social Justice, which frequently sued the state legislature over election laws, has likewise declined to recuse herself from election law cases at Republican request.) That’s why the NAACP’s request for a court-created, extra-constitutional recusal system should be rejected out of hand — but the court has a 4-3 Democratic majority, and it may take the hacking opportunity this case presents.

Just like state laws that would deputize private citizens to become bounty hunters and partisan officials packing election boards with unthinking loyalists, that would be a mistake, and one that would erode the integrity of yet another democratic institution. We can’t preserve liberal democracy if we make new — and ever more dubious — rules every time our side loses.

There’s a new variant of partisan suspicion in America: The other side refuses to play by the rules and must be stopped at any cost or our country as we know it is over. Whether America is really on the brink of catastrophe may be debatable, but the rulebreaking critique has truth to it, and both sides…

There’s a new variant of partisan suspicion in America: The other side refuses to play by the rules and must be stopped at any cost or our country as we know it is over. Whether America is really on the brink of catastrophe may be debatable, but the rulebreaking critique has truth to it, and both sides…