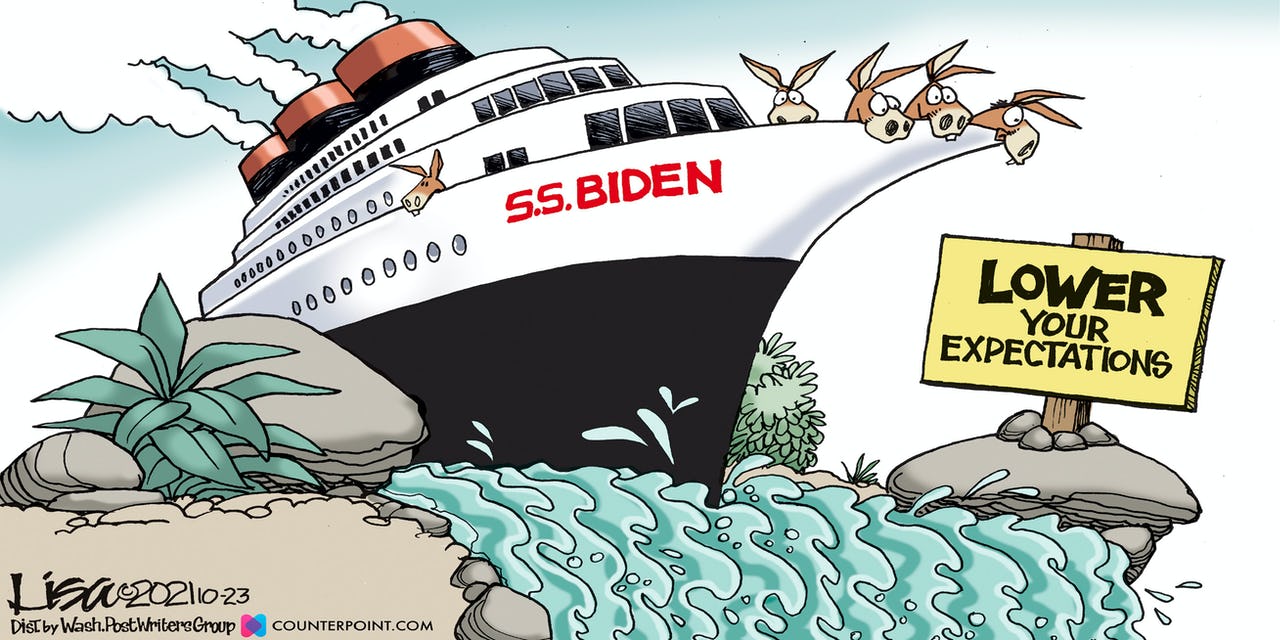 Biden Is Losing His Grip

Bad policies bring terrible results, and even many Democrats are starting to notice.

Some of you might be asking the next obvious question: Did Biden ever have a grip? No, he didn’t. Indeed, we’ve written extensively already about Biden’s marked cognitive decline, and that’s a big reason for eroding confidence in his leadership, even if few are willing to say so.

Biden was rescued from a crowded Democrat primary field by James Clyburn in South Carolina and nominated because he was the least radical of the leading options. Yet he turned right around and governed like Bernie Sanders. As his radicalism goes up, his popularity goes down.

Cooke noticed that even Democrats are increasingly distancing themselves from their party’s dear leader. That includes rebellion on Build Back Better, the vaccine mandate, and Biden’s commie banking nominee — and that’s just this week.

“Increasingly,” says Cooke, “it is not a problem for a Democrat to oppose the president on any particular issue; it is a boon.”

Ironically, it is because Biden is such a loyal party man that his comrades are now abandoning the good ship “Let’s Go Brandon.” Biden doesn’t lead his party, he follows it. And over the last few election cycles, his party has become increasingly controlled by the radical Left. Those policies are unpopular, ergo Biden is unpopular, though most Democrats try to straddle the fence between distancing from him and stubbornly clinging to their policies.

Even NPR is sounding the alarm, and when you’ve lost NPR…

Democrats shouldn’t get away with hanging Biden out to dry.

No sooner had Democrats seized control of both ends of Pennsylvania Avenue than they set about to enact their fundamental transformation. While Biden carpet-bombed the country with executive orders, congressional Democrats passed the American Rescue Plan, which has done exactly the opposite of its Orwellian name.

You may have noticed that inflation is bad. In fact, just this morning comes the news that it got even worse in November — 6.8% on an annual basis. That’s the worst since 1982. The vast majority of Americans rightly suspect Biden is to blame, but they’re beginning to wonder if he even cares.

A big specific culprit is the American Rescue Plan. The Manhattan Institute’s Brian Riedl recently argued that the ARP is “the most damaging spending bill enacted in decades” precisely because it so badly distorted the economy. Labor markets and the supply chain were upended by the bill, all while it served to massively increase consumer demand via cash payments. Riedl says, “Washington may as well have printed $1 trillion and thrown it out of helicopters.” That’s a perfect storm for massive inflation.

Biden’s attempts to look like he’s addressing high gas prices, for example, are pathetic and counterproductive. Gas is nearly 60% more expensive than one year ago, and recently Biden called for a Federal Trade Commission investigation of oil companies for “price gouging” while he released three days’ worth of oil from the Strategic Petroleum Reserve. Democrats then ran out and touted two cents in savings.

In the face of the facts, Biden nevertheless insists that supply chains are great and that spending even more money on wealth transfers in Build Back Better will somehow do something the American Rescue Plan didn’t — cut costs.

The rest of Biden’s policies are no better. His aforementioned vaccine mandates are adding to the chaos, and they are rightly being rebuked by court after court. The Democrats’ war on cops and support of the Marxist pressure group Black Lives Matter has predictably yielded a terrible increase in crime. His surrender of Afghanistan not only left that country in the hands of the same Taliban we evicted 20 years ago, but it showed the rest of the world that Biden is weak. China and Russia have been quick to take advantage.

It’s a bad joke that Biden now thinks he can show leadership by hosting “The Summit for Democracy” this week. He claims he wants to stand against those who would undermine democracy with authoritarianism, while fighting corruption and promoting human rights, but he and his party are on the wrong side of those issues. He’s being criticized for inviting leaders from nations like Pakistan and Congo, but, again, Democrats are undermining democracy, so the guest list isn’t the real problem.

As we noted recently, some in the media think negative coverage is wrong and hurting Biden. The truth is that Biden was never the right man for the job, and confidence in him among even his own party members is perhaps beginning to reflect that.