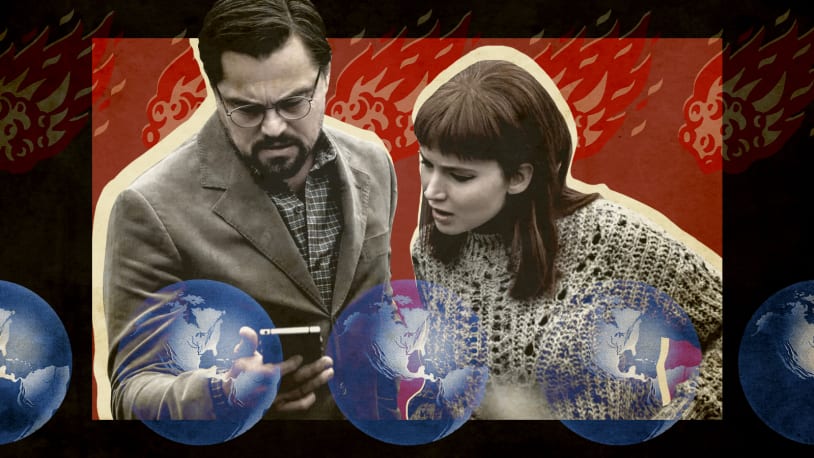 Being the Ricardos and Don’t Look Up are comedies. So why aren’t they fun?

Back in 1995, when Adam McKay was a comedy writer on his first season of Saturday Night Live, he co-wrote a sketch where a vapid morning show called Wake Up and Smile quickly descends into Lord of the Flies-style madness when a teleprompter malfunctions. Even 25-plus years ago, vapid morning shows were not exactly a fresh target, but the Wake Up and Smile sketch was notable for how far it was willing to push its satire. The affable chat-show hosts weren’t just lost without their cheery script; they were panicked into horrific violence and tribalism.

Around the same time, McKay’s fellow NBC employee Aaron Sorkin — whose early years on The West Wing overlapped with McKay’s later years on SNL — was taking a rosier view of broadcasters. His earlier series, Sports Night, was a half-hour comedy about the dedicated professionals making a SportsCenter-like program. He would later follow The West Wing with Studio 60 on the Sunset Strip, about the dedicated professionals making an SNL-like comedy program. Even Sorkin’s many projects that aren’t directly about classic television and/or comedy are packed with zingers; he clearly believes no subject is too serious to inspire snappy laugh lines.

With their respective NBC careers now well behind them, McKay and Sorkin both have new films out this week that trust wholly in the power of comedy, though their approaches continue to be drastically different. The overlap, though, is immensely refreshing: These are two filmmakers who take comedy seriously — albeit sometimes to their detriment.

Sorkin’s Being the Ricardos takes a fictionalized behind-the-scenes look at a week in the life of Lucille Ball as she juggles personal crises while trying to make an episode of her beloved sitcom smash I Love Lucy. McKay’s Don’t Look Up, meanwhile, is about the actual end of the world — a would-be successor to Dr. Strangelove or Network, in which two scientists (Leonardo DiCaprio and Jennifer Lawrence) attempt, mostly unsuccessfully, to warn the world about a comet that will soon obliterate Earth. In this telling, the teleprompters keep working, and that’s part of the problem: Americans, whether politicians or regular folks, are too distracted by media inanities, petty ideologies, and outright denial to realize the coming threat. (Sound familiar?)

Though McKay’s recent films have been explicitly political and less gag-based than the five features he made between 2004 and 2013 with Will Ferrell, he’s shown an admirable reluctance to ditch jokes entirely. His Dick Cheney biopic Vice may have been Oscar bait, but it also featured a bit where the movie sarcastically rolls its end credits in the middle of the story; Don’t Look Up may be apocalyptically pessimistic about the human race, but it’s peppered with running jokes and Jonah Hill riffs. Sorkin, meanwhile, has a faith in the comedy-writing process that’s almost touching. In Being the Ricardos, you can see his gears turning as he tries to understand Lucille Ball on his specific terms: as a demanding comedic perfectionist who insists on constant rewrites and new blocking to address the tiniest of minutiae.

Yet neither Don’t Look Up nor Being the Ricardos exactly work, and they flounder in large part because their relationship with comedy turns uneasy. After inserting comic asides into The Big Short and Vice, McKay broadens again with Don’t Look Up, yet he appears to take shockingly little pleasure in his jokes. If genuine mirth is a big ask for a movie that’s about irreversible climate change, McKay has only himself to blame. His movies with Ferrell were so potently satirical because of their liberating silliness: Talladega Nights can attack American exceptionalism and The Other Guys can savage law-enforcement priorities because they’re such weirdly joyful enterprises. In Don’t Look Up, the flashes of that freewheeling sensibility often feel dutiful, as if McKay is searching through a fog of anger for memories of how he used to make comedy. The scenes with scientists navigating the inane chit-chat of a morning talk show are more plentiful than the six-minute Wake Up and Smile sketch, and have far fewer laughs. A satirical comedy with a 145-minute runtime creates a lot of dead air if the jokes aren’t popping up.

Sorkin, meanwhile, can’t be accused of forgetting his craft. To the contrary, he makes sure Ball’s story has been meticulously rewritten into a Sorkin joint, where comedy is a noble and learned pursuit that’s best paid tribute via lengthy explanations (often but not always delivered while walking). It probably makes sense that Sorkin and his talented stars, Nicole Kidman (playing Ball) and Javier Bardem (playing her husband Desi Arnaz), only recreate bits and pieces of I Love Lucy itself — but it gives way to the sense that Sorkin is explaining an episode of a sitcom at feature length.

There are other aspects to this story, of course, beyond the writing, directing, and performing of a single TV episode: Ball is facing accusations during the Red Scare as she attempts to convince executives to let her depict her real-life pregnancy on her show. Occasionally, Sorkin’s own comic writing crackles through the grandstanding. (He sure loves his characters to recite their accomplishments.) Even that, though, starts to look like a way of elevating his own work — of turning his own accomplishments into something more heroic. Being the Ricardos tries to venerate the creation of comedy and, like Studio 60 before it, can’t resist doing it by association: Lucille Ball wasn’t just funny and groundbreaking, she was right.

Wait until Sorkin gets a load of McKay; he’s right, too. We do live in an easily distracted and self-destructively polarized world. It’s hard to be funny when facing all that down, and true to form, Don’t Look Up strains. Sorkin and McKay have wildly different comic points of view — compare any number of hilarious McKay-penned SNL sketches to the wan imitations Sorkin came up with for Studio 60 — which makes it all the more disappointing to see them both larding up their work with lectures.

The clichéd and simple-minded rejoinder about comedians attempting to get serious or political is that they should just shut up and be funny. Right now, McKay and Sorkin seem cursed with the knowledge of just how difficult both of those directives are.

Back in 1995, when Adam McKay was a comedy writer on his first season of Saturday Night Live, he co-wrote a sketch where a vapid morning show called Wake Up and Smile quickly descends into Lord of the Flies-style madness when a teleprompter malfunctions. Even 25-plus years ago, vapid morning shows were not exactly a fresh target, but the Wake…

Back in 1995, when Adam McKay was a comedy writer on his first season of Saturday Night Live, he co-wrote a sketch where a vapid morning show called Wake Up and Smile quickly descends into Lord of the Flies-style madness when a teleprompter malfunctions. Even 25-plus years ago, vapid morning shows were not exactly a fresh target, but the Wake…

West Side Story is not an old man’s movie