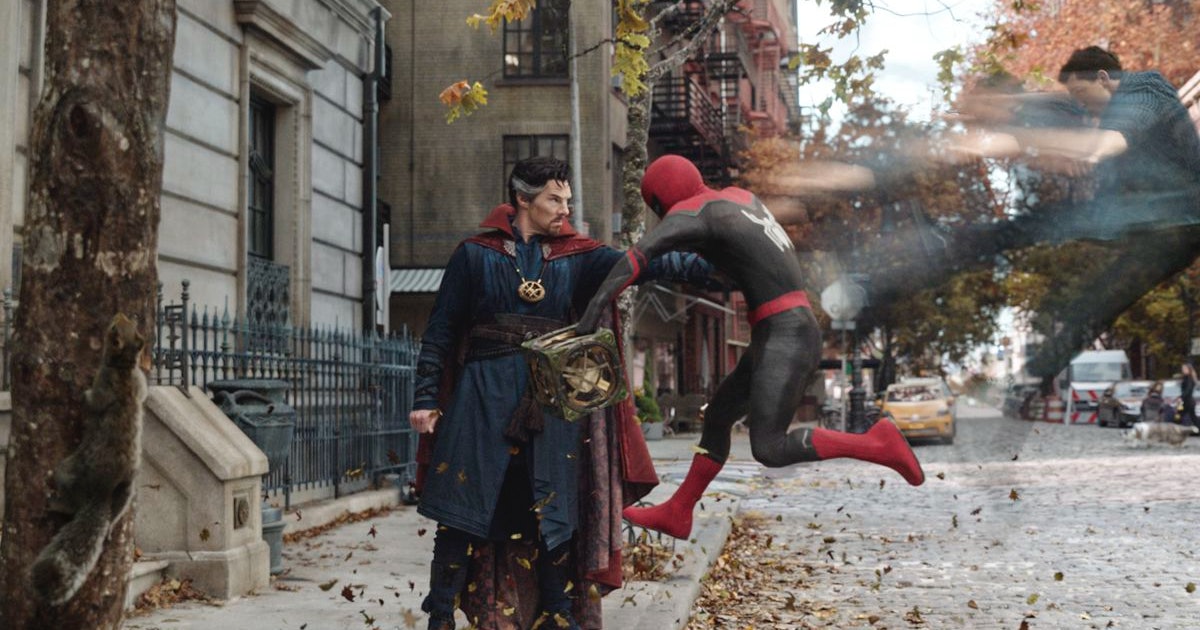 Forget everything you think you know about Spider-Man: No Way Home.

The multiverse? Returning villains? Heroes from other dimensions? Whatever. There’s only one real problem Spider-Man is facing now in the Marvel Cinematic Universe: Going to college. As star Tom Holland puts it to Inverse, “a lot of growth” is in store for Peter Parker in the MCU.

Zendaya, whose character MJ has just started a relationship with Peter when No Way Home begins, echoes Tom Holland.

“In what way, or how, we can’t fully say,” Zendaya tells Inverse. “But I will say that our characters are thrown into a situation that ultimately brings them closer together and changes their life.”

In Spider-Man: No Way Home, in theaters December 17, the unmasking of Spider-Man as high school senior Peter Parker (Tom Holland) causes plenty of problems for the young adult web-slinger. Chief among them: Peter, his girlfriend MJ, and best friend Ned (Jacob Batalon) are denied admission to any school they apply to because of the Spider-Man controversy.

Feeling guilty that he’s ruined his friends’ futures, Peter turns to Doctor Strange (Benedict Cumberbatch) for help to make people forget he’s Spider-Man. But when Strange’s spellcasting goes awry, the multiverse opens, and beings from other dimensions — the first being Doc Ock, played by Alfred Molina reprising his role from 2004’s Spider-Man 2 — are let loose in the MCU.

But what happens after the movie? Do Spider-Man and his friends attend their dream school, the Massachusetts Institute of Technology (MIT)? That prestigious institution, by the way, happens to be the alma mater of Peter’s late mentor, Tony Stark, and where other young superheroes in the MCU are currently attending.

But Holland says Peter has his reasons for wanting to attend MIT. “I think Peter Parker probably wants to go to MIT [for himself],” Holland tells Inverse. “Because correct me if I’m wrong, it’s where the smartest kids in the country go, right?” (Pretty much, Tom, yeah.)

“That’s like the smartest school that you guys have to offer,” comments Holland. Being from the UK, Holland understands MIT as “our Oxford or Cambridge.”

Comically, Holland doesn’t think he could actually attend MIT. “I think Peter Parker and his two pals are wicked smart, which is why it’s incredible we’ve been able to play them so authentically,” Holland says. “Because we’re not wicked smart.”

Post-production work on Spider-Man: No Way Home is still ongoing, believe it or not. Holland adds that he was recently doing ADR (“automated dialogue replacement,” a fancy term for verbal dubbing of film dialogue from a booth) for a climactic fight scene with Doctor Strange.

“I had to do this whole math thing the other day in ADR for the Doctor Strange fight,” Holland cryptically teases. “It took me ages to figure it out. I think [Peter] just wants to go in there because that’s the place where it could facilitate his intellect the best.”

Getting into MIT is one thing. But can Peter, MJ, and Ned stay friends? After all, there’s plenty of other new heroes, and new friends, at MIT. And college is when people change.

“I feel like we try hard to stick together for sure,” Batalon tells Inverse, “I think that like, if anything, Ned gets kind of clingy. Ned would absolutely be trying to look for MJ and Peter all the time.”

With the ever-growing Marvel Cinematic Universe, there are always new people — and new heroes — for Peter Parker to meet. Marvel Studios president Kevin Feige recently confirmed that actor Charlie Cox, who starred in Marvel’s Daredevil for three seasons on Netflix, will soon return as Daredevil to the MCU. Could Matt Murdock become pals with Spidey in the MCU?

For his part, at least, Tom Holland has seen Daredevil.

“I loved Daredevil. I really, really enjoyed it,” Holland says. “I thought Charlie Cox was excellent. I thought Vincent D’Onofrio did a fantastic job as Wilson Fisk. It was really cool to see a darker side to a Marvel character. That fight scene in the hallway was spectacular. I know some of the stunt guys that built that sequence. I thought it was a great show.”

Holland admits he hasn’t seen all of Daredevil. “I don’t think I saw the second season, but I definitely remember enjoying the first season,” he says.

But any larger Daredevil plans seem far into the MCU’s future. For the time being, Tom Holland optimistically believes Peter Parker will do all he can to stick with the friends he has now. “I think our characters have been through too much with each other to let our relationships elapse,” Holland says.

He says that now, but just wait until one of them takes up improv.

Spider-Man: No Way Home opens in theaters on December 17.

Forget everything you think you know about Spider-Man: No Way Home. The multiverse? Returning villains? Heroes from other dimensions? Whatever. There’s only one real problem Spider-Man is facing now in the Marvel Cinematic Universe: Going to college. As star Tom Holland puts it to Inverse, “a lot of growth” is in store for Peter Parker…

Forget everything you think you know about Spider-Man: No Way Home. The multiverse? Returning villains? Heroes from other dimensions? Whatever. There’s only one real problem Spider-Man is facing now in the Marvel Cinematic Universe: Going to college. As star Tom Holland puts it to Inverse, “a lot of growth” is in store for Peter Parker…