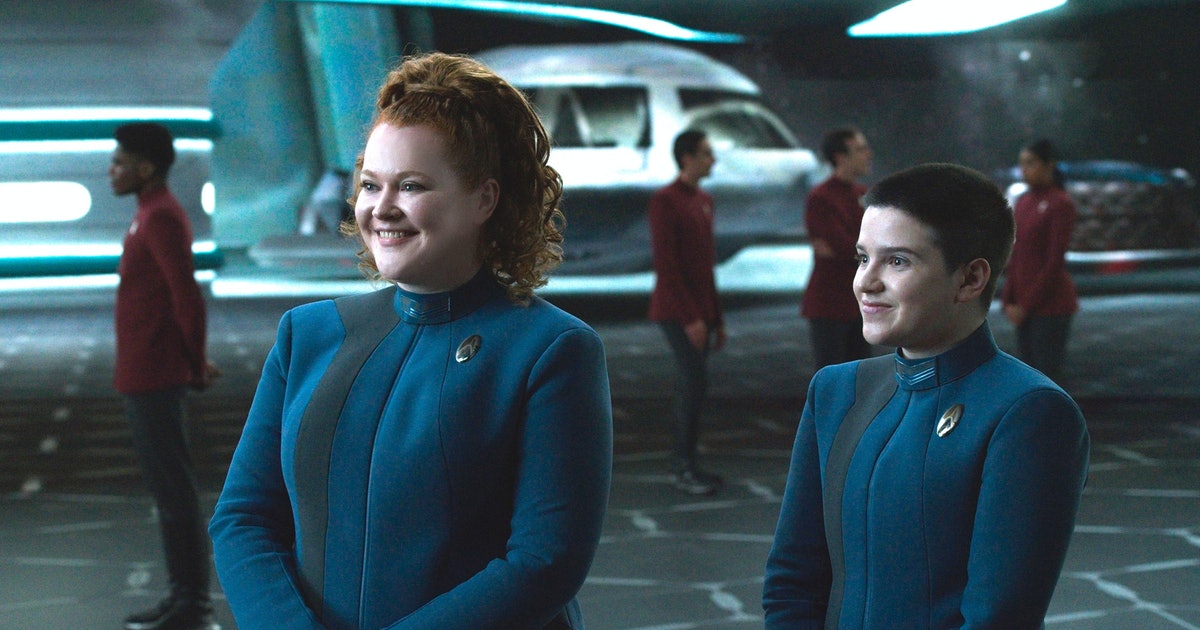 Discovery has lost a crew member. To be clear, a main character hasn’t gone to that great bridge in the sky, but in the game-changing episode “All Is Possible” the fate of a Star Trek fan-favorite is suddenly very different. In an hour that features both a huge change for Discovery and piles of references to The Original Series, this episode suddenly became more pivotal and poignant than anyone expected. Inverse caught up with series star Mary Wiseman and director John Ottman to discuss these course-altering emotional moments and what they mean for the big picture of Star Trek: Discovery. Spoilers ahead for Star Trek: Discovery Season 4, Episode 4, “All Is Possible.”

Perhaps the first twist “All Is Possible” hits you with is that the enigmatic and menacing Dr. Kovich (David Cronenberg), is suddenly quite warm and supportive of Lt. Tilly (Mary Wiseman). Wiseman herself says she loved this small surprise. “I think you want that character [Kovich] to subvert your expectations,” she says. “It gives him a surprising dimension. And I think it surprises Tilly too. And when you’re surprised you kind of listen more.”

In terms of working with the legendary Cronenberg in real life, Wiseman says that although she was initially “too scared” to talk to him, once they started chatting she discovered the beloved director-turned-actor is a “totally normal guy,” albeit “intimidatingly thoughtful.”

Kovich’s recruitment of Tilly to lead a training mission for new Starfleet cadets accidentally sets Tilly on an unexpected path. When her shuttle crashes on an inhospitable snow planet, Tilly is once again saddled with a life-or-death situation. But unlike in Season 3 of Discovery, Tilly is now responsible for the lives of inexperienced students. Director John Ottman says his hope is “All Is Possible” can function as a “standalone” adventure unconnected to the ongoing arc of the Dark Matter Anomaly plaguing the galaxy in Season 4.

For longtime Trekkies, “All Is Possible” is also a homage to a famous 1976 episode of The Original Series called “The Galileo Seven,” where Spock is stranded in a crashed shuttlecraft and, like Tilly, faces impossible decisions.

“The running comment between me and the writers [Alan McElroy and Eric J. Roberts] was that episode,” says Ottman. “They were both diehard Star Trek fans as well, so when I said ‘Galileo Seven’ they said ‘EXACTLY!’” Ottman reveals that yes, anything that seems like it could be an Easter egg is intentional. “I wanted them to be able to work on the shuttle through the floorboards, like Scotty. I wanted them to hear the roar of the monsters outside the shuttle.”

Like many episodes of The Original Series, “All Is Possible” was shot on location, “in a rock quarry an hour outside of Toronto.” And even though Ottman had wanted a wind machine for several scenes, it proved impractical because of actual high winds during filming. He also revealed that the episode had to be shot entirely hand-held because of the danger of the wind knocking over camera cranes.

For Wiseman’s Tilly, the danger and near-loss of all the cadets, including Adira (Blu del Barrio) forces her to do some soul-searching that’s been brewing since the season premiere. By the end of the episode, her experience leads her to make a decision that takes her away from boldly going on the USS Discovery, and instead sees her teaching at Starfleet Academy.

Wiseman calls this Tilly’s “Frances Ha moment,” referring to the 2013 film where Greta Gerwig’s character comes to terms with who she really is instead of sticking to her previous goals. “As an artist, you have to always ask yourself those questions, ‘who actually am I?’”

In past seasons, Tilly’s been characterized as overly ambitious and “on a straight line to the captain’s chair.” But now she’s slowing things down. Why now? Wiseman’s response illuminates not just this realistic turn for her character, but also Discovery’s ongoing mission to provide healthy allegories about self-care.

“Our show is very mental health focused. And trauma compounds. You have to take time to release it and take care of yourself. I feel like this is a really good example of somebody kind of doing that. She describes a lot of whiplash, of not knowing if she’s on the right path, not knowing what brought her to this moment. She questions if she had healthy reasons for those choices. So, she makes a choice about how to take some time for himself and try something new that feels good. It’s an organic outgrowth of her experiences. I think it’s very grown-up of her.

While Wiseman didn’t have direct input into this surprising direction for Tilly, she says “if I were to have requested something, it would be something like this… a story where she has to question herself in some way. And that leads to character growth.”

As an episode of contemporary Star Trek, “All Is Possible” checks all the boxes. It’s a daring adventure, it honors the roots of The Original Series, it tells a new story, and it shows Tilly passing the torch to Adira. But all of these things are bittersweet. By the end of the episode, Tilly is reminiscing with Burnham about their first meeting way back in Season 1. And when she leaves the ship, she promises Burnham “you’ll still see me at Fed HQ.” Unlike so many Star Trek characters, Tilly makes a decision that’s realistic, literally grounding herself to make a safer path for her health.

What does this mean for the future of the show? Rumors have been swirling for years about the possibility of a Starfleet Academy TV series, and now it appears that show could maybe be spun-off from this episode. That’s pure speculation at this point, and Wiseman is keeping her cards close to her Starfleet vest. She won’t say how Tilly will return, but wants fans to be put at ease. This isn’t the end of Sylvia Tilly.

“You will see Tilly again before the end of the season,” Wiseman says. “Don’t worry.”

Discovery has lost a crew member. To be clear, a main character hasn’t gone to that great bridge in the sky, but in the game-changing episode “All Is Possible” the fate of a Star Trek fan-favorite is suddenly very different. In an hour that features both a huge change for Discovery and piles of references…

Discovery has lost a crew member. To be clear, a main character hasn’t gone to that great bridge in the sky, but in the game-changing episode “All Is Possible” the fate of a Star Trek fan-favorite is suddenly very different. In an hour that features both a huge change for Discovery and piles of references…