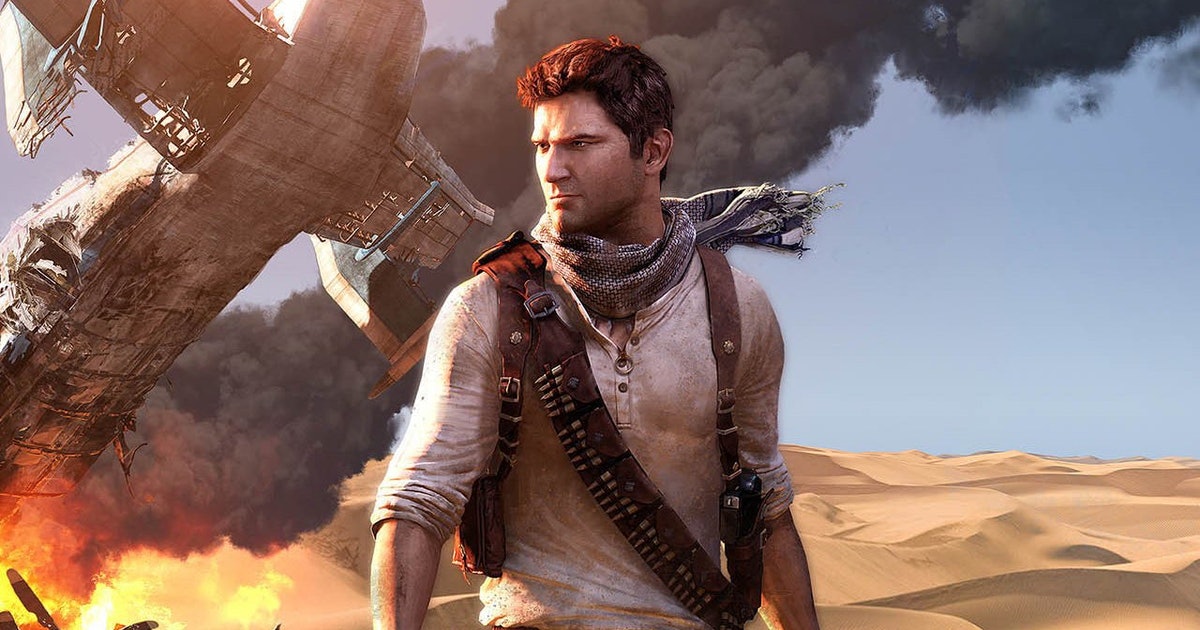 Early on in Uncharted 3: Drake’s Deception, you visit an opulent underground library filled with artifacts while searching for the location of the “Atlantis of the Sands.”

“The legend crops up over and over again under different names – Ubar, Iram of the Pillars, The City of Brass,” professional treasure hunter Nathan Drake expounds, “but the story is always the same.”

Drake’s destination is a lost city mentioned in the Quran. Hidden beneath the shimmering golden waves of the Rub’ al Khali (Empty Quarter) desert, which stretches through Saudi Arabia, Yemen, Oman, the UAE, and Qatar, Iram’s Atlantean nickname was popularized by famed British archeologist and army officer T.E. Lawrence (aka, Lawrence of Arabia).

A year before the game’s release, Uncharted 3 writer and co-director Amy Hennig told Game Informer she originally set out to put Drake in a desert environment, which naturally drew them to Lawrence’s story.

“Everybody knows Lawrence of Arabia, but they don’t know much about him,” said Hennig.

In November 2011, Uncharted 3 made good on that promise, introducing gamers to the “Atlantis of the Sands.” But the game never bothers to mention that the story of Iram comes from the Quran.

As a Muslim, seeing themes from the Quran in the game was exciting, yet all the credit went to Lawrence. 10 years later, it’s time to acknowledge that the story originated in Islam’s central religious text, long before any white explorer ever set their sights on it.

Iram of the Pillars

Iram is first mentioned in the Al-Fajr surah (chapter) of the Quran as an example of how God punishes those who refuse to abandon their corrupt beliefs:

“Have you considered how your Lord dealt with the people of ‘Ad, of Iram, the city of lofty pillars, whose like has never been made in any land, and the Thamud, who hewed into the rocks in the valley, and the mighty and powerful Pharaoh? All of them committed excesses in their lands, and spread corruption there: your Lord let a scourge of punishment loose on them. Your Lord is always watchful.”

Later, in the Hud surah, the prophet Hud meets with the people of the Iram tribe to warn them their arrogant monuments to their own prestige are nothing compared to God’s power. Those who denied Hud’s call to repent and throw themselves upon God’s mercy were punished:

“Such were the ‘Ad who denied the signs of their Lord and disobeyed His messengers and followed the order of every stubborn tyrant. They were pursued by a curse in this world as they will on the Day of Resurrection.”

The Quran’s depiction of Iram also inspired One Thousand and One Nights, a centuries-old collection of folktales from the Middle East, North Africa, and parts of Asia. One of these stories, “The City of Many Columned Iram and Abdullah Son of Abi Kilabah,” portrays Iram as an extravagant city in Al-Yaman, known today as Yemen.

In the story, a man named Abdullah bin Abi Kilabah loses his camel and stumbles upon an empty city in the desert while searching for it. He eventually learns that he’s in the luxurious city of the ‘Ad, once ruled by King Shaddad ibn ‘Ad, before it was destroyed by God to serve as a warning of the empty vanity of earthly treasures.

“And therein were lofty palaces laid out in pavilions all built of gold and silver and inlaid with many colored jewels and jacinths and chrysolites and pearls. And the door leaves in the pavilions were like those of the castle for beauty, and their floors were strewn with great pearls and balls, no smaller than hazelnuts, of musk and ambergris and saffron.”

It’s easy to draw a line between those words and the treasure hunting adventures in Uncharted 3, but the story of Drake’s Deception pulls from more than one mythical Middle Eastern city.

The Sinking City of Ubar

While Uncharted 3 suggests Ubar and the City of Brass are both synonymous with Iram, the reality is more complicated. Bertram Thomas, an English diplomat and the first European to cross the Rub’ al Khali desert, wrote about Ubar around 1930 after one of the Bedouins who accompanied him told him about a city trapped beneath the sand.

Thomas, like T.E. Lawrence, called Ubar the Atlantis of the Sands in his book Arabia Felix: Across the Empty Quarter of Arabia:

“It was a great city, our fathers have told us, that existed of old; a city rich in treasure, with date gardens and a fort of red silver. It now lies buried beneath the sands in the Ramlat Shu’ait, some few days to the north.”

Western imaginations were piqued by Thomas’ writing, and people have been searching for Ubar ever since. Although, according to the locals Thomas spoke with, anyone who found it would be opposed by fearsome jinn. (These supernatural creatures featured in Islamic mythology are referred to as “Djinn” in Uncharted 3, but it’s clearly the same thing).

“It was a great city in a fertile oasis belonging to the tribe of Ad, and its inhabitants were punished for their sins. Since then it has been inhabited by jinn who endeavour to prevent approach to it and destroy those who reach it.”

In the early ‘90s, European and American explorers used NASA’s radar imaging to find the 5,000-year-old city of Ubar in Oman. A 1992 article in the Los Angeles Times reveals that researchers consider Iram and Ubar to be the same city because of parallels in their location and history. While other scholars disputed Ubar’s connection to Iram, Ubar was clearly a crucial stop on ancient frankincense trade routes.

The radar imaging also revealed that Ubar was built over a limestone cavern, eventually causing much of the city to collapse into a sinkhole. Amid the camel bones and fragments of pottery from all over the ancient world, researchers also determined that the city once housed a kingly fortress protected by high towers. Regardless of whether Iram and Ubar are the same, Ubar would have had a reputation as a “many-towered city.”

The Extravagant City of Brass

The City of Brass doesn’t really fall into the same category as Iram and Ubar, but Uncharted 3’s entire “Atlantis of the Sands” segment is based on it anyway. It’s another mysterious city lost to the desert mentioned in a One Thousand and One Nights tale that alludes to the Quran.

Crucial to the plot of the video game, the surah Saba’ discusses King Solomon commanding jinn, which “The City of Brass” expands on:

“We have heard from those who were before us that God (whose perfection be extolled, and whose name be exalted!) bestowed not upon any one the like of that which He bestowed upon our lord Suleyman, and that he attained to that to which none other attained, so that he used to imprison the Jinn and the Marids and the Devils in bottles of brass, and pour molten lead over them, and seal this cover over them with a signet.”

In Uncharted 3, after Nathan Drake’s travels through the dunes of the Rub’ al Khali reduce him to delirium, he’s saved by Salim, a sheik of a Bedouin tribe. As they sit around the campfire in the cool desert night, Salim asks Drake what he and the villainous Marlowe are searching for. When Drake mentions Ubar, Salim describes the city’s dangers.

“If they find Iram, we are all dead,” Salim says. “Three thousand years ago, King Solomon commanded the power of the jinn. Demons, born of smokeless fire. Until they rebelled. He imprisoned them in a vessel of brass, and cast it into the depths of the city. Iram became a place of evil cursed by the tormented spirits of the jinn.”

The One Thousand and One Nights account is similar, although in it King Solomon throws the tormented jinn into the sea. The bottles reach the surface and lead local explorers to the vacant City of Brass, where they discover that the city’s decadent riches couldn’t save its people.

“In the midst of the hall was a great fountain of alabaster, over which was a canopy of brocade; and in those chambers were places containing decorated fountains, and tanks lined with marble; and channels of water flowed along the floors of those chambers, the four streams meeting together in a great tank lined with marbles of various colours.”

The city in Uncharted 3 pulls directly from this story. It’s decorated in brass, marble covers the floors and walls, and armed statues move on their own. The jinn and the fountains, like the one Drake drinks from, play a huge part in the finale when it turns out the jinn are a hallucination caused by the tainted water supply that doomed the city.

Drake later learns that Marlowe is after the vessel of brass containing the trapped “jinn” and, while fighting off Marlowe and her crew, Drake causes the whole city to collapse into a sinkhole — just like the presumed fate of Ubar.

Salim tells Drake the jinn are demons, but the full story is more nuanced. Multi-dimensional creatures that can’t be seen, jinn are everywhere, and their similarity to humans belies their ability to shapeshift and possess bodies. I grew up hearing spooky jinn stories, but jinn can be good or bad.

One Thousand and One Nights presents them in all sorts of contexts, but the concept of jinn seen in Uncharted 3 originated in the Quran. We don’t explicitly see them in the game, but Drake fights off enemies with flaming heads possessing their bodies. In the surah Al-Rahman, we’re told that God “created mankind out of dried clay, like pottery, and the jinn out of smokeless fire.” But Uncharted 3 simply presents them as a world-ending threat without ever mentioning the holy book.

By connecting a real-life excavation with the vague and subtly overlapping scenarios presented in the Quran and Quran-inspired stories from One Thousand and One Nights, Uncharted 3 conjures up a perfect storyline for Nathan Drake. However, on the game’s 10th anniversary, the developers once again cited Lawrence of Arabia as their sole inspiration.

Credit should go where credit’s due. Hopefully, by the time Uncharted 3’s 20th anniversary comes around, its developers are ready to tell the whole truth of their game’s origin story.

Inverse emailed Naughty Dog’s parent company, Sony, for comment on this article, twice. We did not receive a response.

Early on in Uncharted 3: Drake’s Deception, you visit an opulent underground library filled with artifacts while searching for the location of the “Atlantis of the Sands.” “The legend crops up over and over again under different names – Ubar, Iram of the Pillars, The City of Brass,” professional treasure hunter Nathan Drake expounds, “but…

Early on in Uncharted 3: Drake’s Deception, you visit an opulent underground library filled with artifacts while searching for the location of the “Atlantis of the Sands.” “The legend crops up over and over again under different names – Ubar, Iram of the Pillars, The City of Brass,” professional treasure hunter Nathan Drake expounds, “but…

Why fish singing is a reason to worry in Indonesia