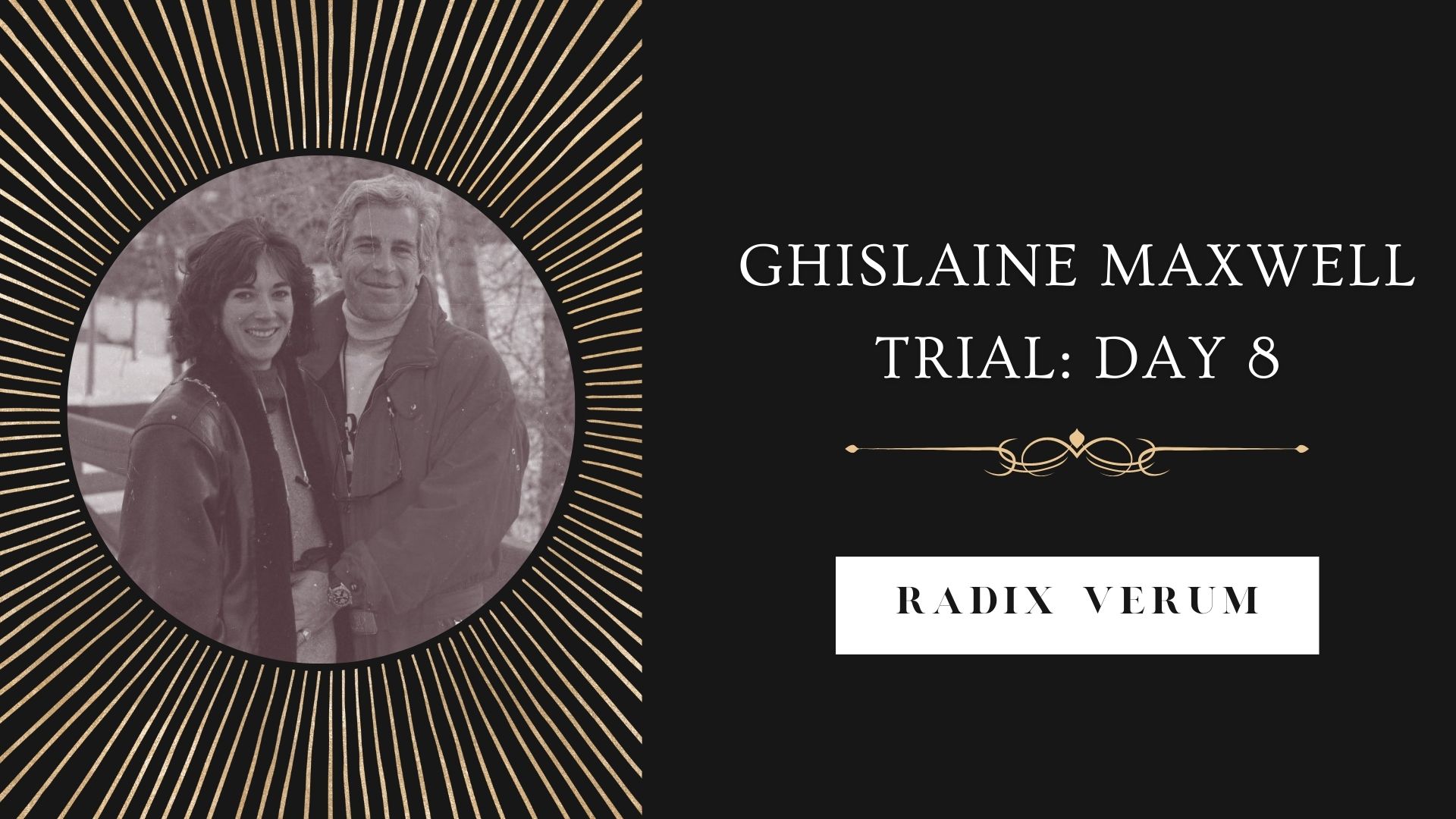 December 8, 2021 — Today begins the eighth day in the US vs Ghislaine Maxwell trial. We have been providing daily coverage of the case. If you are not familiar with the case to date, please read our prior reporting to get a grounding on all the happenings. Maxwell has pleaded not guilty to eight charges including child sex trafficking and other charges. U.S. District Judge Alison Nathan declined to allow the trial to be livestreamed and also denied a call-in line for members of public, despite this being a well- established practice. The government has prevented most of the trial exhibits from being released to be public.

Today’s proceedings began with the next witness to testify, a woman named Janine Gill-Velez who worked for Mar-A-Lago in Palm Beach, Florida.

Judge Nathan: We still have to wait for our juror who has substantial train issues. I’ll step down off the bench.
Clerk: All rise!
Thread will continue. Or really, start, when juror arrives.

The government seems to be wrapping this trial up much quicker than they initially estimated, and we have not been given any justification for this.

OK – Juror has arrived, 45 minutes late.
All rise!
Next witness: Janine Gill-Velez of Florida Property Management (that is, Mar-a-Lago).

Assistant US Attorney: How long have you worked at Mar-A-Lago?
Gill-Velez: 15 years.
AUSA: So this is exhibit 823-r, redacted [for the public]. It’s a personal action notice, the hiring of Sky Roberts in April 2000.

[That is what the US wanted to establish, the hiring of Sky Roberts. So now, cross-exam]
Maxwell’s lawyer Bobbi Sternheim: But you have no personal knowledge of the hiring, correct?
Gill: Correct.
Sternheim: No further questions.
Judge Nathan: Next witness, “Shawn.”

Judge Nathan: This witness will testify only as Shawn, to protect anonymity of previous witness [Carolyn]. No exact likeness in drawing.
Witness: I’m S-H-A-W-N. That sealed exhibit has my full name.
AUSA: How old are you?
Shawn: 38. Some college. I’m a salesman.

AUSA: What was the first name of your girlfriend?
Shawn: Carolyn. She was 14, I was 17. We dated four or five years. She worked at Arby’s, and she worked for Jeffrey Epstein.
AUSA: How did she meet Epstein?
Shawn: Through Virginia Roberts.

AUSA: What’s the difference between Palm Beach & West Palm Beach?
Shawn: Money —
Maxwell’s lawyer: Objection!
Judge Nathan: Sustained.
AUSA Maurene Comey: Did you go to Palm Beach much?
Shawn: No. I didn’t have enough money to buy anything in the gas station there.

AUSA: How long did Carolyn stay in Jeffrey’s house?
Shawn: An hour. Or an hour and five minutes.
AUSA: How were the session set up?
Shawn: They would call my phone: Sarah and a lady with a foreign accent. One was English and one almost French.

AUSA: How old was Amanda when you saw her go to Epstein’s house?
Shawn: 15.
Maxwell’s lawyer: Objection!

AUSA: How old was Melissa when she went to Epstein’s house?
Shawn: 16. She came out with hundred dollar bills.
AUSA: Were you arrested in Louisiana?
Shawn: Yes, possession of meth. And felon in possession of a firearm. Now I’m a salesman.

Now cross examination by Maxwell’s lawyer Jeff Pagliuca
Pag: Shawn, you went to Epstein’s house in 2002, correct?
Shawn: Yes.
Pagliuca: And it was Sarah who called you and gave you her name, right?
Shawn: Correct.

Pagliuca: You met the government, for example in July 2022, and said the accent was French.
Shawn: It was foreign.

Next witness: Nicole Hesse, worked at Epstein’s and Maxwell’s Palm Beach home in 2003.
AUSA Moe: What was your job?
Mrs. Hesse: Take care of the home. I was hired by Ghislaine Maxwell.

Here’s the podcast. Jury finally back & US introduced exhibits – under seal. Inner City Press will keep live tweeting – while trying to cover a criminal proceeding in EDNY court in Brooklyn which has a call-in line, denied in #MaxwellTrial https://t.co/JJibbmpghu

I will include the photos at the end of the article.

AUSA: In this sealed exhibit, do you see that Carolyn called Epstein’s house?
A: I do.
AUSA: Now that we’re looking at this [sealed] Government Exhibit, it says “Carolyn,” right?
A: Right.

Next witness is Epstein’s second pilot, Mister Rogers.
AUSA: Who did you work for until 2019?
Rogers: Jeffrey Epstein. As a pilot, since 1999. I was hired in Columbus, Ohio.

Rogers: We mostly flew between his houses. From 1991 he had a smaller plane, then a Gulfstream. Then a Cesna 421 followed by the Boeing 727…
AUSA: On the Gulfstream, what divider was there?
Rogers: A door, always closed.

Rogers: I kept a log book. Including passenger names.
AUSA: We offer the log book – as a sealed exhibit.

NOTE: Rogers’ log book, as shown on the screen, has the entire column of passenger named redacted or blacked out.
Press question: Is there really a reasonable expectation of privacy for flying on the private jet of a pedophile?

AUSA: How did you find out the names of the passengers?
Rogers: Sometimes we’d be told.
AUSA: Would you always know?
Rogers: No.

FINALLY, jury back in their chairs.
AUSA: Mr. Rogers, please turn in your binder to GX 12. Without saying the name out loud, is that the name of a passenger on Mr. Epstein’s plane?
Rogers: Yes.

It should be noted that in this journalist’s humble opinion, Rogers is a “co-conspirator” who enabled Epstein and Maxwell and did nothing to help the victims.

#Maximum Maxwell Day 8, 9 am livestream Foley Square, after witness Carolyn pushed back at Pagliuca & US said will rest case this week https://t.co/aZVTfdhzB4

AUSA: Let’s look back at sealed exhibit 662, at page 44. Flight number 916… Who drove passengers to the plane in Palm Beach?
Rogers: Juan Alessi.

AUSA: And this flight?
Rogers: From Spain to Tangier, Morocco. [Epstein and Maxwell on the flight]

Maxwell’s lawyer: You never found in the cabin any sex toys or used condoms, right?
Rogers: No I did not.

Maxwell’s lawyer: Isn’t it common to own private planes through companies, one company per plane to limit liability, right?
Rogers: Yes.
Judge Nathan: Let’s take our mid afternoon break. [What is being accomplished by this cross examination?] Thread will continue.

They’re back, with Maxwell’s lawyer Everdell still flaying around on cross examination.
Everdell: Mr. Rogers, you know the real name of Jane, don’t you?
Judge Nathan: Without saying it.
Rogers: Yes.

Everdell: But Epstein had an assistant with the same first name as Jane’s real first name, didn’t he?
Rogers: Yes. [Note: This is another way of outing or doxing]

Everdell: And Eva Dubin was on this flight, and her husband is a hedge fund manager who was an Epstein client?
Rogers: I don’t know.

Everdell: So these trips to Columbus, Ohio, that’s where Leslie Wexner lives, right, the owner of The Limited?
Rogers: Yes.
Everdell: And Mr. Wexner is a billionaire, Jeffrey Epstein’s client?
Rogers: Yes.

Everdell: And you never saw Annie Farmer in your planes, or your logs?
Rogers: I did not.
Everdell (after a time) I though it was later than it is.
Judge Nathan: It just feels that way.

Now at the end, more on scheduling.
Judge Nathan: I would prefer to not do the charging conference Friday (in 9 days) in case you don’t have a case going that day… Given the expedition of the Government’s case, maybe we can use Friday for charging.

Judge Nathan: I’m comfortable letting the defense begin its case on Thursday (in 8 days). The result may be that the jury has (this) Friday off as well.
[Things are moving FAST…]

MSN has published an article about Ghislaine Maxwell, referring to her as Epstein’s “accomplice” rather than the main operator, which is simply incorrect.

You can download Court Documents filed in this case here, via Court Listener.

Prosecutors will rest their case against Maxwell tomorrow — or Friday latest.

“The government has shaved a considerable amount of this case off in the last day,” says Everdell.

“We’re trying to hustle witnesses; it’s not that easy.”

This is truly sickening and a gross miscarriage of justice in this case.

Interesting thread to read, related to the case.

Here are the photos that were entered as exhibits:

The Prosecution Is Fumbling Its Case Against Ghislaine Maxwell – Vanity Fair https://t.co/fYfRgJkjHX

Gee, what a surprise that the same government that repeatedly covered up for Epstein, even making him an informant, isn’t that interested in going after his boss.

Found the Temple of Democracy pic.twitter.com/Gf447NJXt5

That is the temple from Epstein’s Little Saint James Island.

Thus concludes today’s proceedings in the trial for day 8. We will continue to cover the rest of the trial, which might only be another day or so, depending on the government. It should be obvious that this entire thing is one massive cover-up to protect the global elite who all would be implicated in the Epstein ring.

December 8, 2021 — Today begins the eighth day in the US vs Ghislaine Maxwell trial. We have been providing daily coverage of the case. If you are not familiar with the case to date, please read our prior reporting to get a grounding on all the happenings. Maxwell has pleaded not guilty to eight…

December 8, 2021 — Today begins the eighth day in the US vs Ghislaine Maxwell trial. We have been providing daily coverage of the case. If you are not familiar with the case to date, please read our prior reporting to get a grounding on all the happenings. Maxwell has pleaded not guilty to eight…

Nancy Pelosi: I will ‘never forgive’ Trump and his ‘lackeys and his bullies’ for Jan. 6 trauma