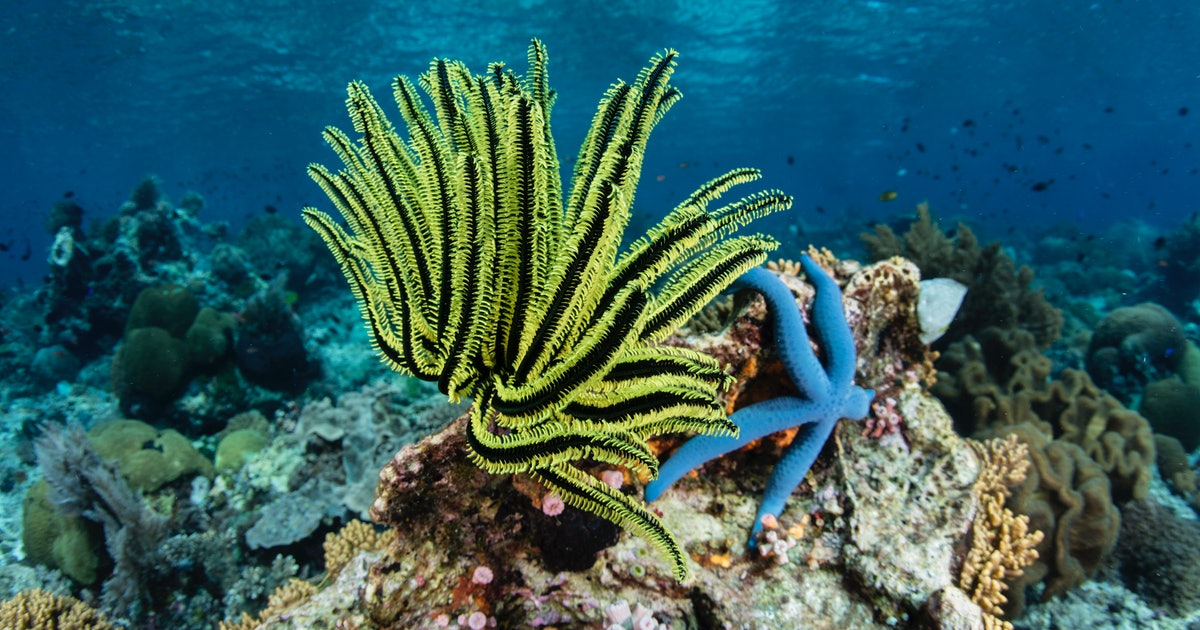 In the waters off of the Indonesian islands of Badi and Bontosua, there is an orchestra constantly at play. This orchestra’s pit is a colorful coral reef — swim by it and a cacophony of sound will bathe your ears: Foghorn-like gurgles coming from a nearby school of fish, the snapping of shrimp beneath your feet, the clicks and cracks of the coral itself. These are the sounds of health — but as a new study reveals, they are also the sounds of unexpected resilience against climate change.

What’s new — Incredibly, just a few years ago, this coral reef was on the brink of death. But writing in the Journal of Applied Ecology on Wednesday, the researchers behind the new study say they have collected audio recordings that tell a different and much more hopeful story of recovery. Soundscapes like these are an underutilized tool that can help us understand the health of restored and dying coral reefs — as well as the animals that inhabit them.

“If we survey reefs by both looking and listening, we can get a more complete picture of the animals living in the ecosystem, and a more complete understanding of the health of the reef.,” Timothy Lamont, lead author of the study from the University of Exeter and the Mars Coral Reef Restoration Project, tells Inverse.

Researchers recorded the sounds of many fish species in healthy coral reefs, forming a “song” of sorts.

Why it matters — Scientists at the Mars Coral Reef Restoration Project work to restore coral reefs, which are particularly vulnerable to climate change.

Studies show that as global temperatures rise to greenhouse gas emissions, coral reefs “bleach” and turn white due to marine heatwaves and ultimately die. Coastal development, fishing, and pollution also threaten reefs. The Badi and Bontosua islands’ reef is threatened by blast fishing — a practice in which explosives are used to kill fish.

In turn, most research on coral reef health is based on looks — is the coral healthy, are there lots of creatures living there? But Lamont and his team turned to a different indicator of ecosystem health: sound.

“When you take a sound recording on a coral reef, you can hear animals that you would never see — some of those that are camouflaged or hide away under corals or are only active at night,” Lamont says.

The study highlight not only the hidden beauty of coral reef soundscapes but also their capacity to reveal the health — or decay — of a vital ecosystem. The findings also give reef restoration researchers sonic evidence that their efforts do bring reinvigorate the previously damaged coral reefs.

“This study is a really encouraging sign that when we reduce the threats that are facing reefs, it is possible to rebuild the ecosystems and see the animals returning,” Lamont says.

How they did it —  Using hydrophones with built-in recorders, the researchers first recorded audio from healthy, restored, and damaged coral reefs in 2018 and 2019.

After listening to one-minute clips from the hours of recording taken, the researchers came to several surprising conclusions about the soundscapes of coral reef ecosystems.

The scientists drew four major findings from their research:

Even the researchers were surprised by the diversity of sounds they came across, many of which could not be traced back to a specific fish species.

“Some of these sounds are very familiar – we know exactly which fish are making the sounds, and why they’re singing,” Lamont says.

“Others have never been recorded before, and the ‘singer’ and purpose of the song remains a mystery,” he adds.

Researchers identified a never-before-heard “fish laugh” when analyzing the sounds of coral reefs in Indonesia.

What’s next — Lamont hopes the phonic technology tested in this study will help other marine researchers in their fight to protect reefs from the looming specter of climate change. But he also stresses “restoration can only be a success if the threats that caused damage in the first place have been eliminated.”

“This example of successful coral reef restoration should give us further motivation in the fight against climate change — if we can dramatically reduce carbon emissions now, it is not too late to rebuild some of our damaged ecosystems,” he says.

Using soundscapes as a measure of reef health is a relatively new tool in marine researchers’ toolkits — the more they are used as a measure in future work, the more scientists will understand the value they bring to their findings.

“Recording sound gives us another angle from which to understand the ecosystem,” Lamont says.

1. Pantropical degradation of coral reefs is prompting considerable investment in their active restoration. However, current measures of restoration success are based largely on coral cover, which does not fully reflect ecosystem function or reef health.

2. Soundscapes are an important aspect of reef health; loud and diverse soundscapes guide the recruitment of reef organisms, but this process is compromised when degradation denudes soundscapes. As such, acoustic recovery is a functionally important component of ecosystem recovery.

4. Healthy and restored reef soundscapes exhibited a similar diversity of biotic sounds (phonic richness), which was significantly higher than degraded reef soundscapes. This pattern was replicated in some automated analyses but not others; the ACI exhibited the same qualitative result as phonic richness in a low-frequency, but not a high-frequency bandwidth, and there was no significant difference between SPL values in either frequency bandwidth. Furthermore, the low-frequency ACI and phonic richness scores were only weakly correlated despite showing a qualitatively equivalent overall result, suggesting that these metrics are likely to be driven by different aspects of the reef soundscape.

5. Synthesis and applications. These data show that coral restoration can lead to soundscape recovery, demonstrating the return of an important ecosystem function. They also suggest that passive acoustic monitoring (PAM) might provide functionally important measures of ecosystem-level recovery—but only some PAM metrics reflect ecological status, and those that did are likely to be driven by different communities of soniferous animals. Recording soundscapes represents a potentially valuable tool for evaluating restoration success across ecosystems, but caution must be exercised when choosing metrics and interpreting results.

In the waters off of the Indonesian islands of Badi and Bontosua, there is an orchestra constantly at play. This orchestra’s pit is a colorful coral reef — swim by it and a cacophony of sound will bathe your ears: Foghorn-like gurgles coming from a nearby school of fish, the snapping of shrimp beneath your feet,…

In the waters off of the Indonesian islands of Badi and Bontosua, there is an orchestra constantly at play. This orchestra’s pit is a colorful coral reef — swim by it and a cacophony of sound will bathe your ears: Foghorn-like gurgles coming from a nearby school of fish, the snapping of shrimp beneath your feet,…

Is Nuclear Power in Our Future?