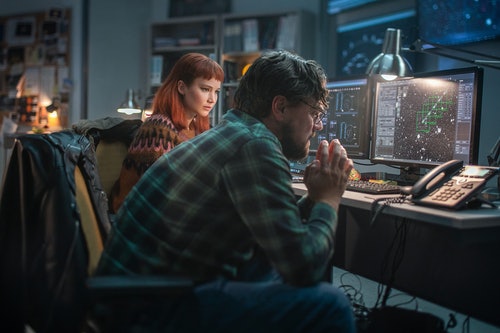 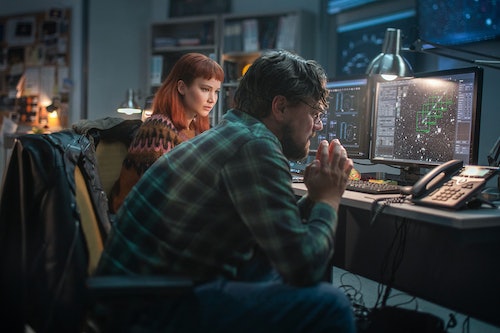 As the redhead steeps her tea and scrapes a glob of jelly on her toast, she suddenly discovers a long-lost comet that hasn’t whizzed past the planet since the dawn of humanity. But her astronomy professor, the vexed Dr. Randall Mindy (Leonardo DiCaprio), arrives at a worse revelation. This comet is a planet killer, and it’s on a collision course toward Earth.

The opening to Don’t Look Up is a common disaster movie trope. As seen in Armageddon, Deep Impact, Independence Day, and so forth, the scientist discovers the doomsday maker, and the attention slowly shifts to the “real” heroes: the brawny brave astronauts tasked with saving the planet. As one character in Don’t Look Up says, “America always needs a hero.” And so do the movies. But McKay doesn’t take the obvious route. Rather than handing the heroics over to astronauts or the military, he stays with the scientists.

Bearing similarities to Dr. Strangelove and Network, but without their comedic nimbleness, Don’t Look Up bears unmistakable allusions to the world’s present pandemic crisis. It’s cathartic. It’s funny and sometimes tender. But McKay’s heavy-handedness when translating the narrative’s messaging for laughs often chokes away this bloated film’s emotional resonance. 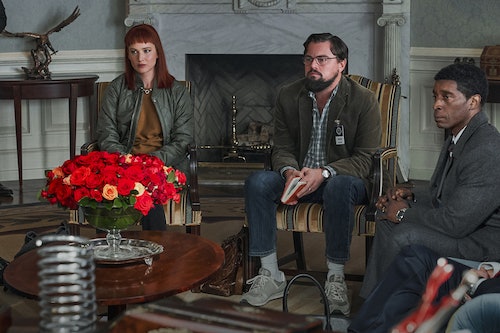 McKay initially tries to set up a comedic triple act in Don’t Look Up. Kate and Dr. Mindy team up with the head of NASA’s Planetary Defense Coordination, Dr. Oglethorpe (Rob Morgan), to inform the president about the grave danger facing the planet. They do not find receptive ears. The president, Janie Orlean (Meryl Streep), who the viewer should presume is Republican, is more concerned with pushing through a controversial Supreme Court nominee than confronting the looming disaster.

Don’t Look Up is all about science, baby.

Performance-wise, both Morgan and DiCaprio (an underrated comedic actor) are game. But Lawrence struggles to get on the same wavelength, often overplaying the laughs and sight gags for a tad more dramatic effect than the scene calls for.

Openly ridiculing America’s mistrust of facts, Don’t Look Up is all about science, baby. In the early going, such as the Oval Office meeting between the trio of scientists and the president, the punchlines come quick. They almost all land. Jason Orlean (Jonah Hill), the president’s dimwitted son, who happens to be her chief of staff and an overt reference to Eric Trump, thrives on disseminating misinformation and ridiculing both Kate and Dr. Mindy for their reliance on data and academic jargon. 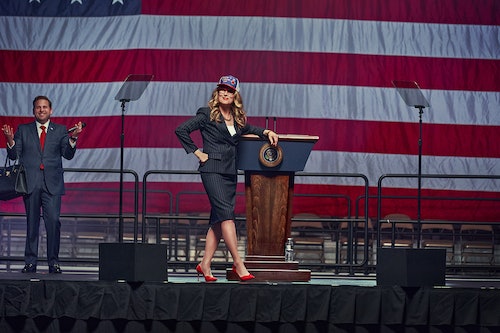 The entire administration is a jingoistic hyper-conservative band of underqualified politicians. At its basest level, it reflects the Trump administration. They laugh away a crisis and ignore the science, only seeing the big, flashy poll numbers in front of them. They, along with the country, also illustrate the desensitized postmodern population, whereby the planet’s constant state of near-destruction, whether through global warming, natural disasters, or wars, makes even the most pressing emergency just another walk in a familiar hellscape.

This apathy extends to the media too. After the scientists are rebuffed by the administration, they decide to leak the information. Kate and Dr. Mindy appear on a political television talk show, mirroring the ones found on MSNBC or CNN, hosted by two pop-culture, spin-obsessed anchors: Jack Bremmer (Tyler Perry) and Brie Evantee (Cate Blanchett). The pair would rather spawn the next meme than report on the news. McKay struggles to move the talk show duo beyond being short-sighted hucksters to totemic of the news media’s shortcomings. 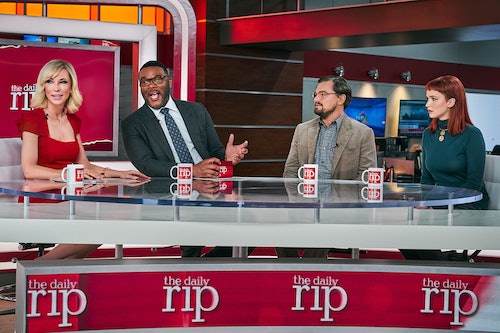 At its best, Don’t Look Up lampoons the ways our most trusted institutions and leaders have failed us. Eventually, even the trusted Dr. Mindy becomes akin to Dr. Fauci, a well-meaning scientist who believes he can be the grown-up in the room but ultimately only serves to prop up negligent politicians. DiCaprio plays the part well, even if the writing leaves his arc brief.

This McKay film is more than its punchline.

McKay and editor Hank Corwin (Vice, The Big Short) return to their penchant for crafting chaotic, overbearing montages, collecting an array of wildlife clips this time. The use here registers as more haphazard than usual. In a fervent, urgent diatribe delivered by DiCaprio, McKay repurposes the emotional beats of Peter Finch’s speech in Network. While cathartic, the lead-up to the scene is hurried, relying solely on the loudness of DiCaprio’s voice to carry the day.

Likewise, Dr. Mindy references the Mills Brothers’ song “Till Then” as a parallel to the Dr. Strangelove’s ending with Vera Lynn’s “We’ll Meet Again.” But the scene doesn’t resonate to anywhere near the same degree. In fact, it comes by rushed and hushed, missing the bittersweet note it aims to strike.

Don’t Look Up finds genuine ground when tapping into a real human element. The film’s ending, a somber flourish, is surprisingly measured. A gathering of family and friends, trading mundane memories, trying to muster up some small talk to quell the oncoming fear, does more to connect this film to the pandemic than any joke or lampoon ever could. That poignancy sets this film apart from The Big Short and Vice because it’s not simply a regurgitation of terrible events and even worse people.

McKay’s Don’t Look Up might be an overstuffed dark satire, with a mish-mash A-List ensemble playing star personas rather than fully sketched characters. But for once, probably not since his early collaborations with Will Ferrell, this McKay film is more than its punchline. There’s real heart here.

In Adam McKay’s grand, apocalyptic political satire, Don’t Look Up, Ph.D. astronomy candidate Kate Dibiasky (Jennifer Lawrence) assembles a modest meal as she makes an exciting discovery. As the redhead steeps her tea and scrapes a glob of jelly on her toast, she suddenly discovers a long-lost comet that hasn’t whizzed past the planet since…

In Adam McKay’s grand, apocalyptic political satire, Don’t Look Up, Ph.D. astronomy candidate Kate Dibiasky (Jennifer Lawrence) assembles a modest meal as she makes an exciting discovery. As the redhead steeps her tea and scrapes a glob of jelly on her toast, she suddenly discovers a long-lost comet that hasn’t whizzed past the planet since…

Good or bad? The benefits of caffeine, explained