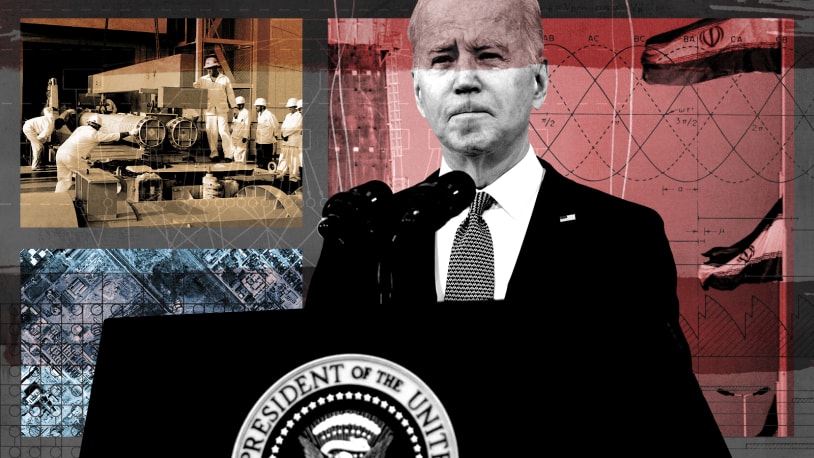 Watching the almost certainly doomed negotiations between Iranian and European leaders in Vienna this month is to witness the real-time end of the effort to use diplomacy to short-circuit Tehran’s nuclear weapons program. When these talks inevitably collapse, they will entomb decades of delusion and leave the mangled edifice of American foreign policy exposed. America’s reputation will be in well-deserved tatters, our increasingly ugly domestic divisions no longer hidden under gloss of diplomacy.

The negotiations are paused as of this writing and scheduled to resume next week, but already European diplomats sound deeply pessimistic. U.S. leaders are pivoting back to veiled threats of force — “We’re either going to get back into compliance with the agreement,” said Secretary of State Antony Blinken on Friday, “or we’re going to have to look at dealing with this problem in other ways” — while Iran is increasing its demands. Tehran wants higher enrichment thresholds as well as a guarantee that the United States won’t deep-six the agreement again the next time some fulminating Republican is elected president.

You don’t need to have aced the Foreign Service Exam to see why this is going to be the problem moving forward: Iran has a new, hardline president, Ebrahim Raisi, who doesn’t trust the United States to hold up its end of any bargain, with good reason. In 2018, the Trump administration withdrew from the 2015 Joint Comprehensive Plan of Action (JCPOA), commonly known as the Iran nuclear deal, for no reason but arrogance and spite. That agreement had limited Iranian enrichment activities and subjected the country to intrusive inspections by the International Atomic Energy Agency (IAEA) in exchange for sanctions relief. While most Republicans always objected to the framework of the deal, no one has ever produced any credible evidence Iran was cheating.

Former President Donald Trump’s petulant maneuver sent the Iranian economy into a tailspin, inflicting untold hardship on the Iranian people while achieving absolutely nothing. After the U.S effectively destroyed the JCPOA, Iran redoubled its efforts to enhance its enrichment capabilities and restricted the ability of inspectors to monitor its nuclear activity. Today, Iran may be enriching uranium — a complicated process needed to increase concentration of the U-235 isotope which fuels nuclear power plants — to 20 percent. At 90 percent, you can start building bombs, though Tehran has always denied intent to do so.

It’s worth remembering that stopping Iran from getting to this stage was the whole purpose of the agreement in the first place, and that the deal Trump broke represented the culmination of more than a decade of often rancorous diplomacy and false starts. The Trump administration claimed, with logic almost too tortured to take seriously, that the Iran deal made it more likely that Iran would pursue and acquire nuclear weapons. They argued withdrawing would force Tehran back to the table, where the Islamic Republic’s negotiators would either capitulate easily to American terms or face the wrath of airstrikes.

Needless to say, Iran did not negotiate with the Trump administration, and no targeted strikes were forthcoming from the U.S. The more important long-run consequence, though, is that Trump might have permanently damaged American credibility. Why would negotiating partners believe U.S. foreign policy decisions and agreements can survive changeovers in executive power in Washington? Other governments won’t spend half a dozen years negotiating for a deal that will only survive two or three years.

The situation Trump has made is something like the Prisoner’s Dilemma, a thought experiment used by international relations scholars to understand the inherent difficulties states have trusting one another in the anarchic realm of global politics. Imagine you and a friend decide to do some light crime, and you agree beforehand to say nothing if you’re caught. Sadly, you turn out to be woefully inept crooks, and you get nabbed, after which detectives immediately separate you into different interview rooms.

If you both say nothing, you are likely to get a short prison term of 1 year. However, if you blame your friend and she remains silent, she gets three years and you walk, and vice versa. If you both sell each other out, your sentences will be two years — worse than if you’d stuck to the deal, but better than being the sucker. If you don’t trust each other, you both end up worse off.

Many international relations scholars believe this basic logic applies to all kinds of interactions between countries, including climate change negotiations, arms control agreements, and fishing restrictions. States would be best off abiding by the terms of, say, a deal to reduce nuclear weapons stockpiles or protect tuna populations. In exchange for a little discomfort, both parties avoid a worse outcome. But just as there’s no one to enforce the handshake deal between two petty criminals, there’s no global sovereign to punish cheaters who secretly build thousands of nukes or loot the ocean of every fish in sight.

This all sounds pretty bleak! But the clever game theorists who concocted this little fable think there’s a way to alter its basic, Kobayashi Maru-style disaster calculus, which is for the exercise to be indefinitely iterative. In other words, if you expect to collaborate with your friend again, you will be more likely to adhere to your promises to one another. Creating lasting relationships and routine opportunities for collaboration and conflict resolution between states is how observers believe international institutions mitigate conflict even though there’s no sheriff in town.

The Iran deal could have been the start of a self-reinforcing relationship of trust between Washington and Tehran. Instead, Trump made Iran the sucker in the game.

And it wasn’t the first time, either — beginning in the 1990s, the U.S. has walked away from one treaty after another, sometimes pulling out of existing agreements (like the Anti-Ballistic Missile Treaty), failing to ratify formal treaties in the U.S. Senate (like the 1997 Mine Ban Treaty), or, more recently, demanding one-sided revisions to an extant deal (like the Trump administration’s insistence on renegotiating the North American Free Trade Agreement).

Collectively, these shenanigans have made it harder for other states to trust American diplomacy, especially the Republican Party is in power. The long history of enmity and conflict between the U.S. and Iran makes it even harder to overcome past betrayals, particularly when that same Republican Party is rather openly plotting a coup for 2024. Tehran knows the Middle East is the last place the Biden administration wants to spend its limited political capital, and after nearly twenty years of being threatened with a bombing campaign that never materializes, Iran’s negotiators can be forgiven for thinking such threats are theater.

Ultimately, Iran won’t get the guarantees it wants here. Washington isn’t participating in these talks directly, and President Biden can’t control what his successor will do. And so, absent some stroke of genius in Vienna, this crisis is likely to stagger on in its current form, with all parties worse off, until Iran finally builds a nuclear weapon or some future U.S. president launches another brutal, multi-decade, no-win war with Iran as its target.

At that point, it will be pretty clear who the sucker was all along.

December 7, 2021 December 7, 2021 Watching the almost certainly doomed negotiations between Iranian and European leaders in Vienna this month is to witness the real-time end of the effort to use diplomacy to short-circuit Tehran’s nuclear weapons program. When these talks inevitably collapse, they will entomb decades of delusion and leave the mangled edifice of American…

December 7, 2021 December 7, 2021 Watching the almost certainly doomed negotiations between Iranian and European leaders in Vienna this month is to witness the real-time end of the effort to use diplomacy to short-circuit Tehran’s nuclear weapons program. When these talks inevitably collapse, they will entomb decades of delusion and leave the mangled edifice of American…