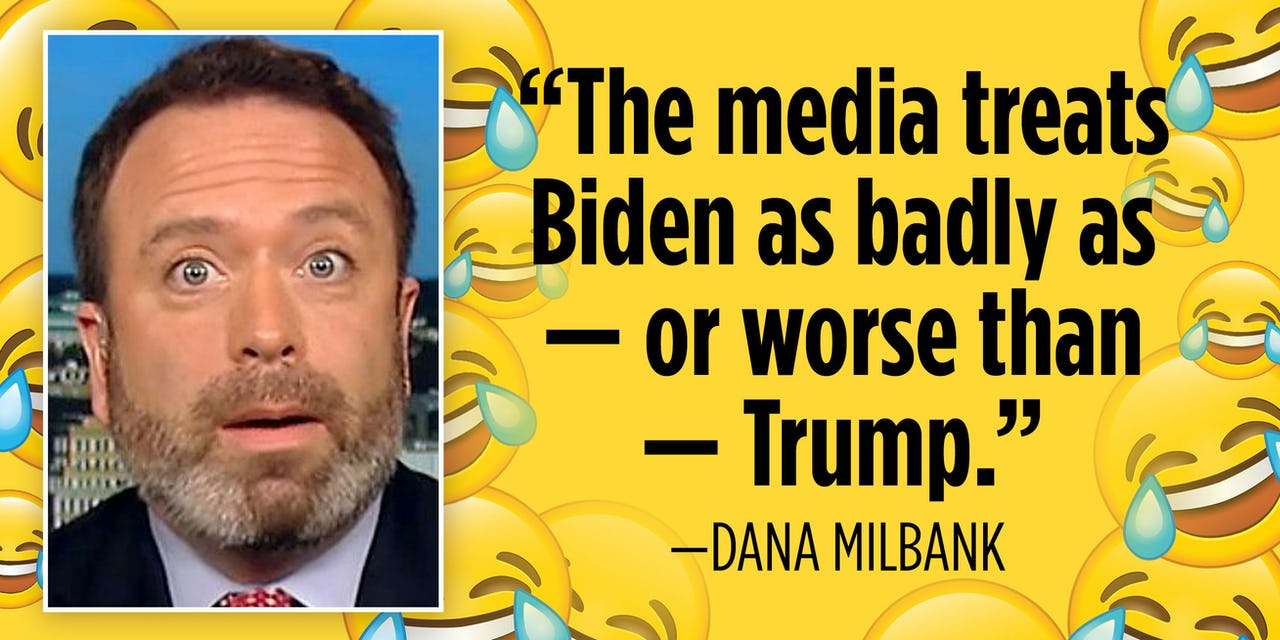 Gosh, the Media Shouldn’t Be So Hard on Biden

A Washington Post columnist argues that coverage of Biden is far more negative than that of Trump.

In February 2017, just weeks after President Donald Trump took the oath of office, The Washington Post for the first time in its history created a motto for itself. “Democracy Dies in Darkness,” it nobly proclaimed, as if its job was henceforth to speak truth to power and save the country from the forces of evil. Well, nearly five years later, a columnist for socialist billionaire Jeff Bezos’s rag circumspectly argues that the media is being too hard on the president. Joe Biden, that is.

We’re sorry — we should have given you a warning not to spew your coffee.

Post opinion columnist Dana Milbank has always been a leftist hack not to be taken seriously. His “analysis” is routinely more indicative of mental illness than acuity. But he’s taken his Trump Derangement Syndrome to new lows with his latest effort over the weekend. “The media treats Biden as badly as — or worse than — Trump,” his headline reads. “Here’s proof.”

The “proof” Milbank earnestly offers begins with a few phrases from one publication, Politico’s Playbook newsletter. Words like “hard questions” and “freakout” and “Biden dithers” have the Post’s hyperventilating scribe reaching for the brown paper bag. But “it isn’t just Politico,” he warns. You see, he employed some algorithms that “combed through more than 200,000 articles … from 65 news websites” to evaluate the “sentiment” of news coverage. Brace yourselves, because it’s worse than you think.

“The findings,” he says, “painstakingly assembled by FiscalNote vice president Bill Frischling, confirmed my fear: My colleagues in the media are serving as accessories to the murder of democracy.”

The Leftmedia is the “enemy of the people,” but Milbank means something different.

His whole argument is that democracy is being murdered because “Biden’s press for the past four months has been as bad as — and for a time worse than — the coverage Trump received for the same four months of 2020.”

Milbank proceeds to remind us just how much the Bad Orange Man deserved even more negative coverage, and he’s aghast that the media was so nice to a man who “actively subverted democracy.” His readers likely agree, of course, because his paper is a leading voice in Big Leftmedia, which serves to grossly misinform millions of willing dupes. Yet perhaps Milbank is unaware that coverage of Trump was more than 90% negative — and not just negative but “Trump is Hitler” insane. In Biden’s first 100 days, by contrast, coverage was only 19% negative. Coverage has gotten more negative in recent months, but it never seems to dawn on Milbank that this is because Biden is doing a horrific job as president. When the news is surrendering Afghanistan, aggression from China and Russia, rampant inflation and disruptions in supply chains, and woefully underwhelming employment growth, is the media supposed to spin that positively?

“I suspect my peers across the media have fallen victim to our asymmetric politics,” Milbank muses. “Biden governs under traditional norms, while Republicans run a shocking campaign to delegitimize him with one fabricated charge after another.”

Just as one example, Trump spent four years under a cloud because of the entirely fabricated “collusion with Russia” hoax. Milbank himself spent years writing columns breathlessly spreading those lies. Part of the outflow of that coup attempt was that Trump was impeached for what Biden actually did, all in a transparent attempt to delegitimize Trump.

Meanwhile, Biden is a swamp creature who delegitimizes himself with myriad autobiographical lies and corrupt family dealings. But because the media literally refuses to cover such things while Big Tech censors silence those who do, Milbank has somehow convinced himself that Trump is worse. He wants readers to share his derangement, and he pats himself on the back for taking such “a stand.”

The Patriot Post was founded in 1996 to do the difficult work of combatting the monolithic Leftmedia monopoly on public opinion. Naturally, leftists who think their propaganda constitutes “democracy” aren’t terribly happy with even the existence of alternative voices like ours. But that only belies their utter lack of journalistic ethics and integrity. Just imagine, as our publisher Mark Alexander did when he launched this venture 25 years ago, if media coverage was actually neutral. What would the American political landscape look like? For starters, Joe Biden wouldn’t even be president, much less have to worry about whether some third-rate pundit thinks coverage of him is too negative.

By  NATE JACKSON December 7, 2021 A Washington Post columnist argues that coverage of Biden is far more negative than that of Trump. In February 2017, just weeks after President Donald Trump took the oath of office, The Washington Post for the first time in its history created a motto for itself. “Democracy Dies in…

By  NATE JACKSON December 7, 2021 A Washington Post columnist argues that coverage of Biden is far more negative than that of Trump. In February 2017, just weeks after President Donald Trump took the oath of office, The Washington Post for the first time in its history created a motto for itself. “Democracy Dies in…

Republicans’ trust in doctors is eroding. It’s a symptom of a larger disease.