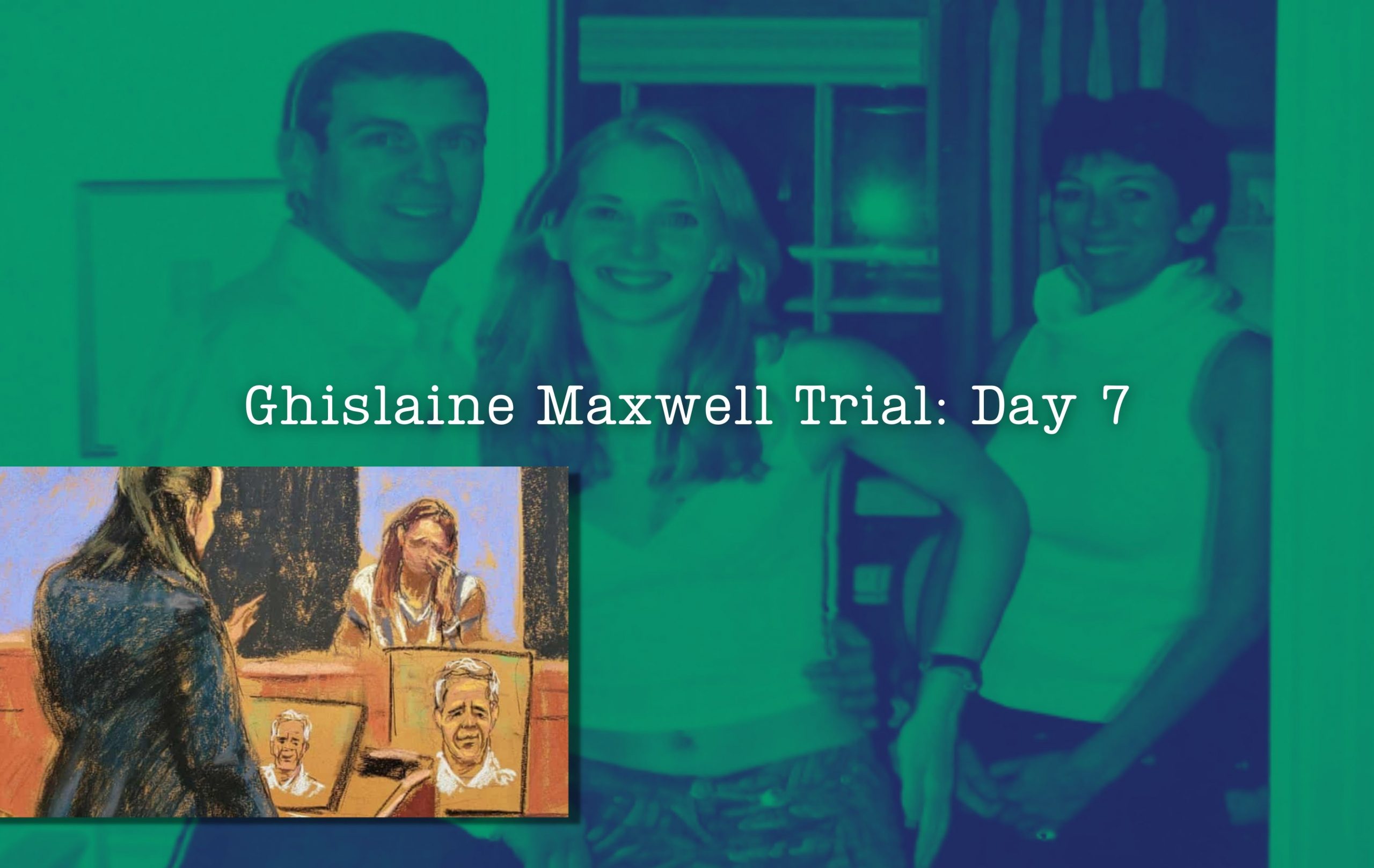 Words cannot even begin to express the absolute rage I feel reading about the kinds of vulnerable people that Maxwell and Epstein targeted.

When invited to go to the island, Carolyn says, she told Maxwell she was “too young” and “there was no way in hell” she’d be allowed to go there.

Asked what she was doing with the money she made at Jeffrey Epstein’s house, Carolyn breaks down into tears when saying: “Buying drugs.”

She says she returned to Epstein’s house after that because she needed the money. She stopped going because she realized she became “too old.”

She says she was arrested for her drug use. “I handed the officer the drugs.”

Q: Why did you do that?
A: Because I was an idiot. (she laughs) She agrees she was later arrested for possessing stolen property.

Carolyn says she went to therapy following those incidents.

She says she later worked for an escort service and became a stripper.

She sometimes had sex with men for money, she said. (This is still the government’s direct examination, apparently anticipating what Maxwell’s attorneys will ask.)

The initial questions look into Carolyn’s prior statements about Virginia Roberts. Flashback from Maxwell’s defense opening: “Carolyn was introduced to Epstein not by Ghislaine, by a woman named Virginia Roberts.”

Lunch break. Cross-examination will resume after the recess.

The figure identified as “Sean” earlier in the thread should be “Shawn.”

These are all very good points, which I and a number of other researchers and journalists have made.

Pagliuca says the FBI notes say that Carolyn described the woman as having an “unknown” accent.

The witness denies that, saying she told the FBI that the woman had an “accent.”

Also, catch up on this morning’s testimony with my write-up here. https://t.co/C2M0nOJeLp

Credit to Mr. Klasfeld for providing daily coverage of this case for us.

Jury is sent out of the courtroom for recess.

Pagliuca tells the judge he’s trying to impeach the witness “by omission,” pointing to paragraphs of Carolyn’s civil complaint about Sarah Kellen. He says the govt’s trying to play down Kellen’s alleged role and play up Maxwell’s.

The civil complaint does the opposite, Pagliuca says.

Cross-examination continues after the conclusion of afternoon recess. Pagliuca turns to Carolyn’s history of alcohol and drug use, a subject anticipated by the prosecution’s direct examination.

Pagliuca refers to Carolyn’s previous testimony in litigation:
Q: Did you ever have sexual intercourse with Mr. Epstein?
A: No.
She interjects about the exchange: “I replied ‘No’ because I was not a willing participant. He had sex with me and I stopped it.”

(My guess: if you’re worried that Jeffrey Epstein might have a picture of you doing something you shouldn’t have been doing…he had it.)

My question then is why haven’t they charged other co-conspirators?

Pagliuca: So for the 2d visit to Mr. Epstein’s house, you sat in the kitchen and spoke with the chef, right?
Carolyn: I don’t remember if it was the 2d visit or after.
Pagliuca: Show the witness what she said in 2007.

Pagliuca: And you moved from Florida to Georgia.
Carolyn: Yes.
Pagliuca: I want to talk about the lawsuits you filed —
Carolyn: What does that have to do with me moving to Georgia?

After Pagliuca asks Carolyn again and again about FBI 302s and lawsuit paragraphs, Judge Nathan declared the afternoon break, having said she’ll be addressing objection now out of the presence of the jury. Judge Nathan: Let’s pick up the first factual paragraph.

Pagliuca: We argue the entire complaint is inconsistent, by omission. She mentions Sarah Kellen and not Ms. Maxwell.
AUSA Maurene Comey: This was a lawsuit against 2 defendants – there was no reason that 3d parties would be in.
Judge Nathan: I’m letting it in.

Just before the jury comes back in, AUSA Comey asks how long the cross examination is going to be, it’s already been longer than the direct. No answer. All rise!
Pagliuca: Do you recall abusing drugs from the age of 13?
Carolyn: If you call pot drugs, yes.

Carolyn: What does any of this have to do with what I’m here for today? Ghislaine Maxwell fondled me and broke my soul —
Pagliuca: Move to strike.
Judge Nathan: Carolyn, you have to follow my rules. Jury will disregard.

Pagliuca: You received these funds from the Epstein Compensation Fund — Carolyn: No amount of money will ever heal —
Pagliuca: Move to strike.
Judge Nathan: Jury will disregard. I instruct the witness to comply with the rules.

Pagliuca: You claimed you saw a photograph of Ms. Maxwell pregnant, correct? Carolyn: Nude and pregnant. That was on multiple —
Pagliuca: No further questions.
AUSA Maurene Comey: Three minutes. Did you write your legal complaint? Carolyn: No (crying)

AUSA Comey: What year was it when you were 13?
Carolyn: If I do the math, yes.
AUSA Comey: Are you here to get money?
Carolyn: No, what she did is wrong, she took young girls —
Pagliuca: Objection.

Judge Nathan: Jurors, we’re two minutes over. See you tomorrow.
Clerk: All rise!
Now government says: We will be resting this week (!) They’d said five to six week trial – this is a big change. Now Judge Nathan floats a charging conference on Saturday the 18th.

Judge Nathan: I have inquired and we could get Ms. Maxwell here on a Saturday, and open the overflow courtroom.
Again: Why no listen-only call-in line, as existed even today in US v. Steve Bannon in DDC?

Judge Nathan: I remind you, one word objections only. Adjourned.

This is shocking, because I would have expected this to go on much longer.

We want to see the VIDEO/AUDIO evidence that was recorded at each property.

Isabelle and Kevin Maxwell enter the courthouse as I ask about possible CommTouch/Cyren software backdoor for Israeli intelligence to spy on Americans.

Props to this young man for his brave and intrepid reporting, and for asking the right questions for once.

Carolyn testified this morning that Ghislaine Maxwell felt her body and judged it as good for Epstein.

Maxwell’s molestation of Carolyn only happened once but she was trafficked to Epstein over the course of 4 years before becoming “too old” at 18. #GhislaineMaxwellTrial pic.twitter.com/OLP9UnNom4

Addys Adds is outside of the courthouse daily, providing updates so please follow him.

This belies FBI claim that they never obtained computer hard drives as evidence in the 2005 criminal case against Epstein. (More)

This isn’t surprising, consider the FBI made him an “informant.”

So this is why the drive was found with prior evidence tape from 2007 on it this time around? https://t.co/Pk6hWl5D5d

This is a very good question.

Thus concludes Day 7 of the Ghislaine Maxwell Trial. I am left with more questions than answers and an overwhelming feeling that a major injustice and coverup is happening here. Just yesterday Maxwell’s powerful siblings appealed directly to Attorney General Merrick Garland about Maxwell’s treatment, and now we learn they are cutting the trial short. We will continue to provide daily coverage of the trial.

Words cannot even begin to express the absolute rage I feel reading about the kinds of vulnerable people that Maxwell and Epstein targeted. When invited to go to the island, Carolyn says, she told Maxwell she was “too young” and “there was no way in hell” she’d be allowed to go there. Q: Did she…

Words cannot even begin to express the absolute rage I feel reading about the kinds of vulnerable people that Maxwell and Epstein targeted. When invited to go to the island, Carolyn says, she told Maxwell she was “too young” and “there was no way in hell” she’d be allowed to go there. Q: Did she…

Biden laments attacks on Saule Omarova, his now ex-pick for comptroller: ‘Far beyond the pale’