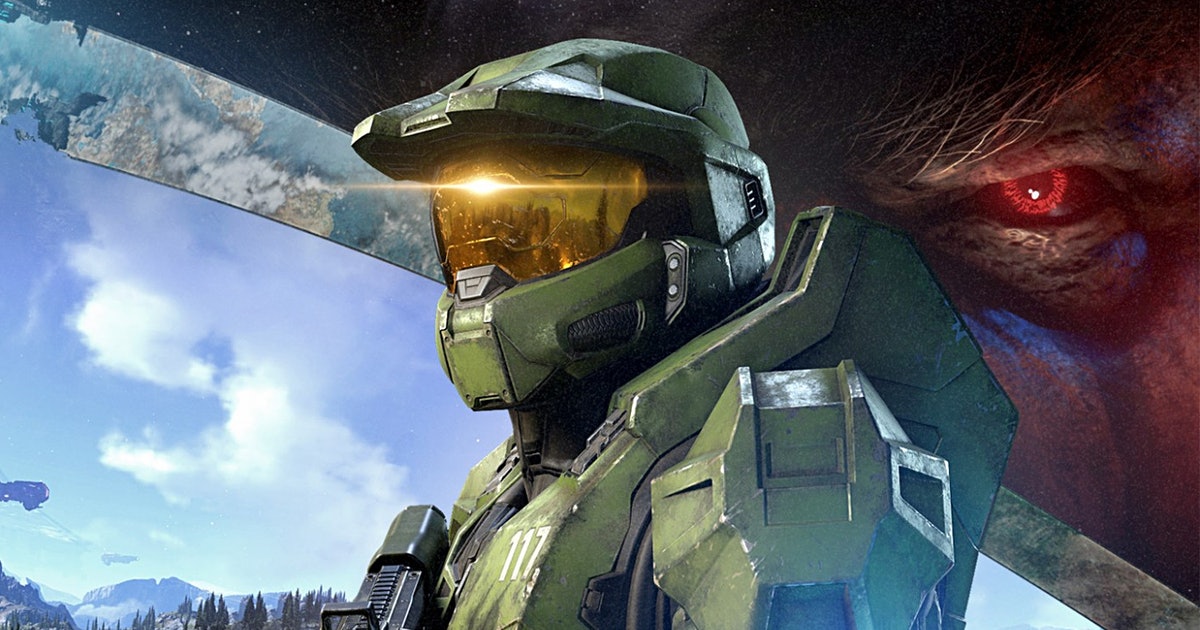 I know beyond a measure of a doubt that I am dead.

Moments earlier, I was flying across a chasm on Zeta Halo in my brand-spanking-new Wasp, looking for my next High-Value Target when I came under heavy fire. Within seconds, my shields overload under a barrage of plasma cannons and sniper fire. My ship is ablaze. Moments before it explodes, I dive into the sky, swearing aloud. As I hurtle through the emptiness, I desperately fire Master Chief’s Grappleshot several times anyway. Somehow, I catch the vast hexagonal beams supporting the island. There are leagues (and certain death) below me with more than a sheer football field of alien metal above.

After more than a minute of panic-spamming the grapple button, I finally sling up over the edge and onto the grass dizzy, breathless, and triumphant. I’m shocked it was even possible.

At large, Halo Infinite sticks the landing almost as well as I did. There are (almost) no invisible walls and no object that Master Chief’s Grappleshot can’t grip. While the bombastic story is hard to follow and there are some repetitive mechanics that could have been left out, the entire package is so stunning and refined that it will blow your mind.

If Master Chief has any lesson for us, it’s to lean in and trust your instincts. This man-shaped weapon of mass destruction goes from functionally dead to taking on an army of aliens in a matter of days, as he often does.

Human forces already lost a war on the sprawling ringworld of Zeta Halo, and it’s your job to take it back from the Banished. Their leader, the ape-looking Escharum, evokes Thanos with his hulking frame and bald ugliness. His motives and mission are complex, but this Big Bad is also desperate to die in battle — or at least prove himself a greater warrior than the legendary Master Chief. He’s at times an admirable reflection of a warmongering culture at its peak and the perfect dark foil to Chief.

“It is buff grandpa showing the young hotshot how it’s done.”

The pilot who flies you around chirps in your ear throughout the game, giving us a more humane perspective to contrast Master Chief’s gruff exterior. There’s also a childish new Cortana-looking AI to provide some levity through fresh eyes. Even after its explosive conclusion, the campaign inspires more new questions than it answers, but it’s a satisfying arc with dynamic environments, stunning graphics, and the top-notch cinematic polish you’ve been dreaming about.

Arthur C. Clarke’s Third Law states that “any sufficiently advanced technology is indistinguishable from magic,” and 20 years after the original Halo revolutionized FPS games, that idea looms large. Halo Infinite dives so far into a sci-fi rabbit hole that it feels like an abstract fantasy. AIs have bodies made of hardlight. Even the ancient aliens have ancient aliens they worry about. The Harbinger, a new villain featured in some trailers, is a spindly space wizard, an aptly named relic from a lost age that foreshadows bigger threats to come.

Halo has always been about style and finesse before substance. If you’re unfamiliar with some lore and history from the previous games, Halo Infinite will bewilder you. But it does just enough to usher newcomers through its self-contained narrative arc.

An evolved return to form

Gunplay feels better than ever in Halo Infinite. Even more so than previous entries in the series, the well-crafted combat encourages a run-and-gun approach that the new Doom games transformed into overindulgence. You can’t pick your two favorite guns and keep them forever. (That’s what Destiny is for!) You have to elbow lesser enemies in the face, scavenge their weapons, empty those clips, pummel someone else, and keep going.

If you stop, you are dead.

If Doom Eternal is a cheeseburger and fries at In-n-Out, then Halo Infinite is a steak dinner in the big city with an overpriced bottle of luscious red wine. It is buff grandpa showing the young hotshot how it’s done because he invented the game.

Halo Infinite makes me reflect on how formative the original Halo was for me as a gamer. Even in games like The Last of Us, I rush into every fight relying on sheer bravado, quick reflexes, and passive intuition. To feel that same thrill again within the Halo universe is nothing short of exquisite.

In the game’s final act, there’s a moment when you roll up to a vast new combat arena: countless enemies of each type, turrets and vehicles everywhere, snipers on every edge. I physically panicked. Just as I punched the thruster forward on Ghost, the thunderous orchestral Halo theme kicked into high gear. Dear reader: A lump caught in my throat. I wanted to scream and cry.

Halo Infinite is bigger and better than the franchise has ever been. And though some of the environments do feel a touch repetitive at times, as do the open-world tasks, the encounters have enough variety to keep things exciting. The linear campaign takes you through sprawling, lush canyons and grim Forerunner bases. Each of the boss encounters are totally unique, forcing you to shift your approach and utilize different pieces of Master Chief’s growing toolkit.

Where do we go from here, Chief?

Every video game these days wants to be your forever love, and it’s fitting that a game with “infinite” in the title might finally achieve that. A risky experiment in fusing open-world environmental design with prestige first-person shooting mechanics, Halo Infinite’s campaign is a triumph that makes you feel like the kind of person who can do anything against impossible odds.

Halo Infinite is not a perfect game. (Does such a thing even exist?) But just like Final Fantasy VII Remake, it is the perfect game for a very specific — and large — audience of millennial gamers that want to feel the same fierce fun that lit their imaginations on fire two decades ago. Do I wish co-op was ready for launch day? Sure, but at least it’s on the way. Does multiplayer need more diverse sources of XP gain? For the love of God, yes. But it’s already getting better.

Zoomers and millennials alike may frown in despair at the current state of things, but there’s so much room to grow. Remember that this is Xbox’s flagship franchise, and all of Microsoft’s formidable development power is investing in this game’s future.

I may be a shameless simp who grew up with classic Halo LAN parties where I demolished my trash friends and sees Halo Infinite as a dream come true, but I am far from alone in that. Play Halo Infinite on an Xbox Series X on the biggest and best screen possible, and it’ll be the best game experience of 2021 — maybe even 2022.

We should feel positively giddy about this rebirth of Halo and the infinite possibilities to come.

INVERSE VIDEO GAME REVIEW ETHOS: When it comes to video games, Inverse values a few qualities that other sites may not. For instance, we care about hours over money. Many new AAA games have similar costs, which is why we value the experience of playing more than price comparisons. We don’t value grinding and fetch quests as much as games that make the most out of every level. We also care about the in-game narrative more than most. If the world of a video game is rich enough to foster sociological theories about its government and character backstories, it’s a game we won’t be able to stop thinking about, no matter its price or popularity. We won’t punch down. We won’t evaluate an indie game in the same way we will evaluate a AAA game that’s produced by a team of thousands. We review games based on what’s available in our consoles at the time. And finally, we have very little tolerance for junk science. (Magic is always OK.)

If you don’t believe me about my grappling escapades, here’s proof:

I know beyond a measure of a doubt that I am dead. Moments earlier, I was flying across a chasm on Zeta Halo in my brand-spanking-new Wasp, looking for my next High-Value Target when I came under heavy fire. Within seconds, my shields overload under a barrage of plasma cannons and sniper fire. My ship…

I know beyond a measure of a doubt that I am dead. Moments earlier, I was flying across a chasm on Zeta Halo in my brand-spanking-new Wasp, looking for my next High-Value Target when I came under heavy fire. Within seconds, my shields overload under a barrage of plasma cannons and sniper fire. My ship…