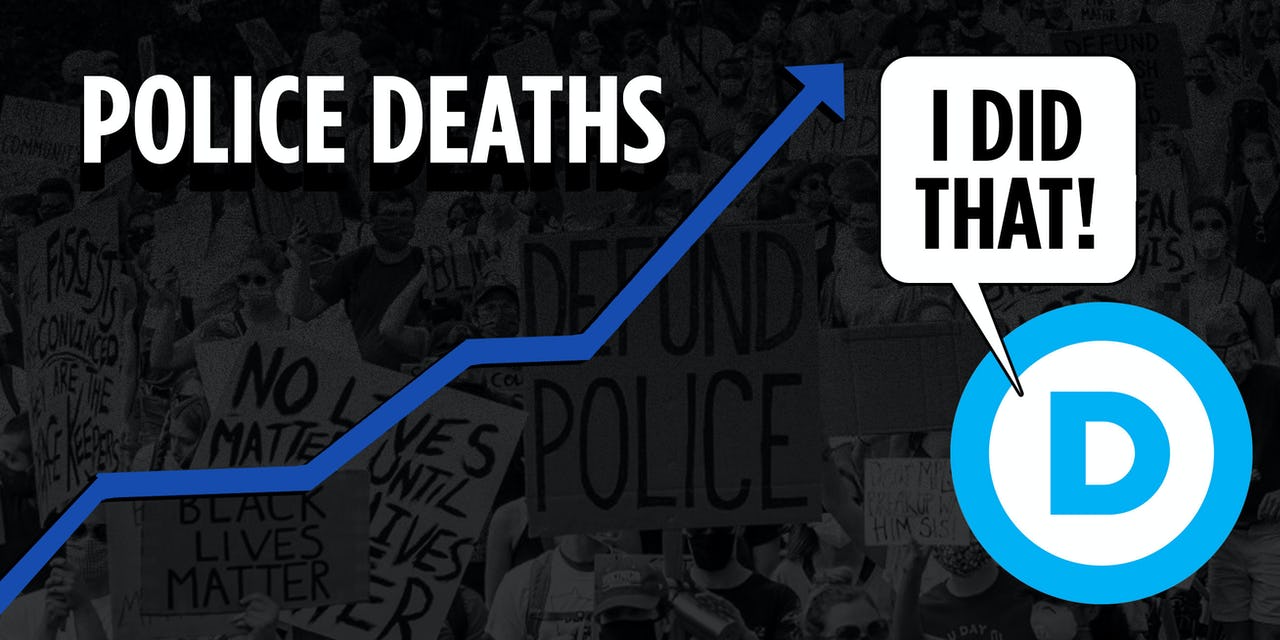 And the Democrats’ pro-crime, anti-cop policies are squarely to blame.

Last September, when the nation’s largest police union backed Donald Trump for reelection over Joe Biden, it must’ve had a sense that its endorsement would be a matter of life and death.

And, sure enough, it has been. “We are on pace this year to see the highest number of officers shot in the line of duty in one year ever recorded,” said Patrick Yoes, president of the Fraternal Order of Police.

To date, 314 officers have been shot in the line of duty in 2021 — 58 of them fatally. This deadly year has marked the End of Watch for far too many cops. In addition, the FOP has recorded 95 ambush-style attacks on cops this year — a 126% increase from last year. And we still have nearly a month left in 2021.

Yoes all but affixed the blame where it belongs: at the feet of the Defund Democrats. “There is no doubt that the recent erosion of respect for law enforcement has fueled more aggression towards police officers than what has been seen in previous years,” he said. “As violence continues to be aimed at law enforcement, our officers continue to show up every day to keep the communities they serve safe. These men and women run toward danger to protect the public when everyone else is running away.”

But if we can affix the blame for this increase in cop killings to Democrats and their fellow leftists, we can also affix an exact date and a particular event to this state of affairs: May 26, 2020, the day after career criminal George Floyd was killed in South Minneapolis by a combination of fentanyl and an overzealous cop. That was the beginning of the rioting, and the long hot summer of 2020, and the demonization of the police.

As riots raged in big cities across the nation, the war cry of Marxist Black Lives Matter agitators was everywhere the same: “Defund the Police.” It seemed like a good idea at the time — to idiotic leftists with no understanding of cause and effect.

At a June 23 press briefing, White House Press Secretary Jen Psaki tried to argue that because Republicans had voted against Biden’s whopping $1.9 trillion “American Rescue Plan,” they were guilty of defunding the cops. “That was voted into law by Democrats just a couple of months ago,” Psaki said. “Some might say that the other party was for defunding the police; I’ll let others say that, but that’s a piece.”

Some might say, said Biden’s paid prevaricator, but not even the friendlies at The Washington Post could stomach that whopper. The paper’s leftist “fact-checker,” Glenn Kessler, gave Psaki’s ridiculous claim three Pinocchios — and frankly probably robbed her of a much-deserved fourth.

Indeed, no less a high-profile Democrat than Alexandria Ocasio-Cortez is on record: “Defunding police means defunding police,” she said. “It does not mean budget tricks or funny math.” Same with fellow Democrats Ilhan Omar and Ayanna Pressley and Rashida Tlaib and Jamaal Bowman. Perhaps most outrageously, AOC’s fellow Squad member, St. Louis Democrat Cori Bush, famously and repeatedly called for defunding the police in her murder-ridden district while at the same time shelling out tens of thousands of taxpayer dollars for her own private security. “And defunding the police has to happen,” said Bush. “We need to defund the police.”

Safety for me but not for thee.

Of course, Democrats are first and foremost committed to staying in power, and once they realized that defunding the cops was both deadly dangerous and politically poisonous, they began running away from their words — or, in the case of Joe Biden and others, from their silence on this critical issue. The result was an attempt to rewrite history.

Our Mark Alexander put the lie to this effort back in July, calling out the specific culprits and replaying their exact words. Still, it’s a call-out that bears repeating. And repeating. Because not a single American voter should be left to believe the Democrats’ lie. They called for defunding the cops. And in doing so, they declared war on the cops. They own it, and they deserve to reap the whirlwind.

Perhaps the election of 2022 and 2024 will bear this out. Perhaps the citizenry will come to understand the direct consequences of the electoral decisions — the Soros-funded pro-crime district attorneys, the plummeting morale and retirements of our law enforcement officers, the difficulty in recruiting and the inability to replenish the ranks.

Through no fault of their own, law-abiding citizens and law-enforcement officers across the nation are learning a grim and deadly lesson: Elections have consequences.

And the Democrats’ pro-crime, anti-cop policies are squarely to blame. Last September, when the nation’s largest police union backed Donald Trump for reelection over Joe Biden, it must’ve had a sense that its endorsement would be a matter of life and death. And, sure enough, it has been. “We are on pace this year to…

And the Democrats’ pro-crime, anti-cop policies are squarely to blame. Last September, when the nation’s largest police union backed Donald Trump for reelection over Joe Biden, it must’ve had a sense that its endorsement would be a matter of life and death. And, sure enough, it has been. “We are on pace this year to…

80 Years Later: The Day That Continues To Live In Infamy