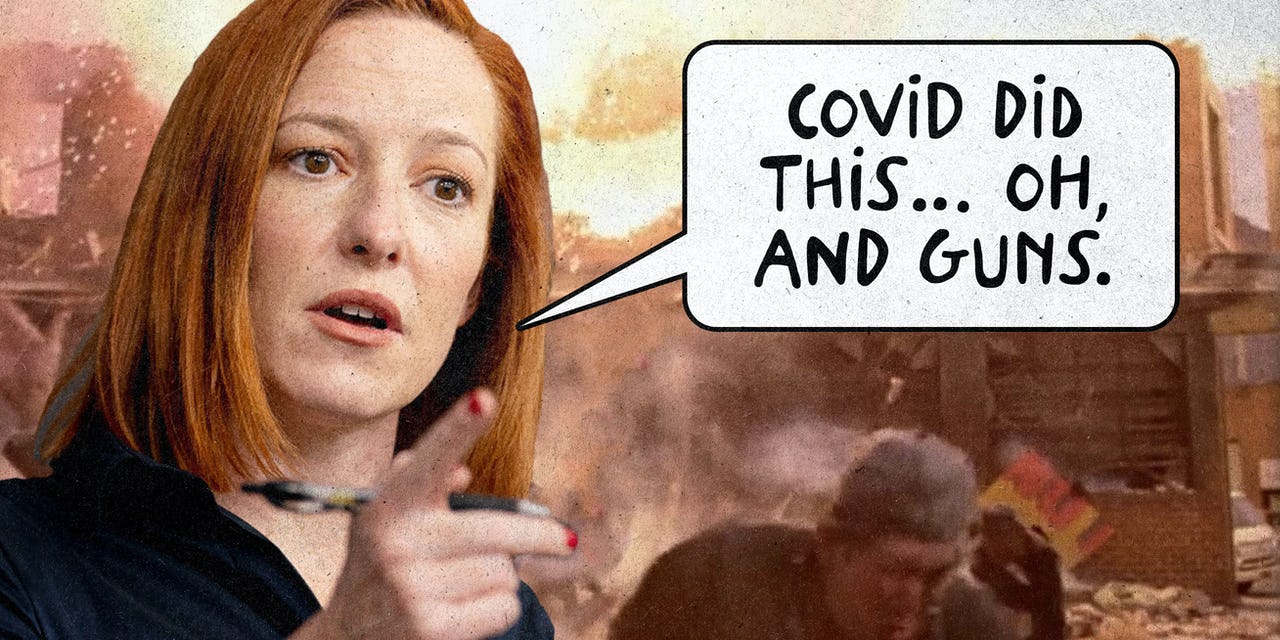 Over the last several weeks, the cities of San Francisco, Los Angeles, Chicago, Seattle, New York, and Minneapolis have experienced a spree of smash-and-grab looting targeting high-end and larger department stores. Clearly, these looting sprees have been organized, as a sizable number of individuals simultaneously descend on a store, smash-in and loot, and then quickly make their getaway in multiple waiting vehicles.

Interestingly, this organized crime wave appears to have begun in Chicago mere hours after Kyle Rittenhouse was found not guilty. Rather than abating, it has seemingly only gotten worse. (Chicago, meanwhile, just surpassed 1,000 homicides for the first time since 1994. The last time a Republican mayor ran the Windy City was 1931.)

So, on Thursday, Fox News’s Peter Doocy brought up the issue to White House Press Secretary Jen Psaki. “Big cities are dealing with smash-and-grab robberies. A record number of police officers have been shot and killed this year,” he said. “What is President Biden going to do about all this lawlessness?”

In what has become the first instinctive response to any negative developments facing Joe Biden’s administration, Psaki deflected blame onto Donald Trump, ridiculously asserting that the former president had failed to offer enough financial support for local police during the pandemic. “Well, Peter,” she huffed, “I would say that, one, the president proposed additional funding in his budget over the funding that had been proposed by the prior president to increase and support local police departments, to make sure we keep cops on the beat.”

That’s awfully rich coming from the party and presidential campaign that sided with Black Lives Matter and the call for defunding the police.

Fortunately, Doocy has been through enough of Psaki’s spin classes to know better than to accept that non-answer. He pressed on, “Does the president still think that crime is up because of the pandemic?”

Psaki then attempted the “let me educate you” dodge: “I think many people have conveyed that, and also one of the … root causes of crime in communities is guns and gun violence. And we’ve seen that statistically around the country.”

Ah, the “root causes” and “guns cause crime” trope. It’s a favorite rhetorical deflection technique that Psaki used to assign blame for crime on non-volitional objects (guns) while also falsely implying that rising firearm ownership leads to higher crime rates, when in fact the data shows just the opposite is the case. But we digress.

Refusing to buy that line, Doocy asked, “So when a huge group of criminals organizes themselves and they want to go loot a store — a CVS, a Nordstrom, a Home Depot — until the shelves are clean, do you think that’s because of the pandemic?”

Psaki affirmed it: “I think a root cause in a lot of communities is the pandemic, yes.”

The genuine root cause of this recent crime spree in these longtime Democrat-run cities has much more to do with their leftist policies — gutting police budgets, enacting laws that essentially decriminalize looting, and often refusing to prosecute or let off the hook those criminals who do get caught. When the Democrat Party embraces those leftist radicals who falsely malign all law enforcement as systemically racist, they are tacitly endorsing the inevitable criminal activity that results.

Of course, now that rising crime has become a front-and-center problem in these Democrat-run cities, members of Team Biden want to tout their support of law enforcement. As Psaki put it, “The president absolutely believes that community police forces can have an important instrumental effect in helping keep communities safe.” Sure he does.

Friday Newsfeed: In A Festive Mood During The Biden Era