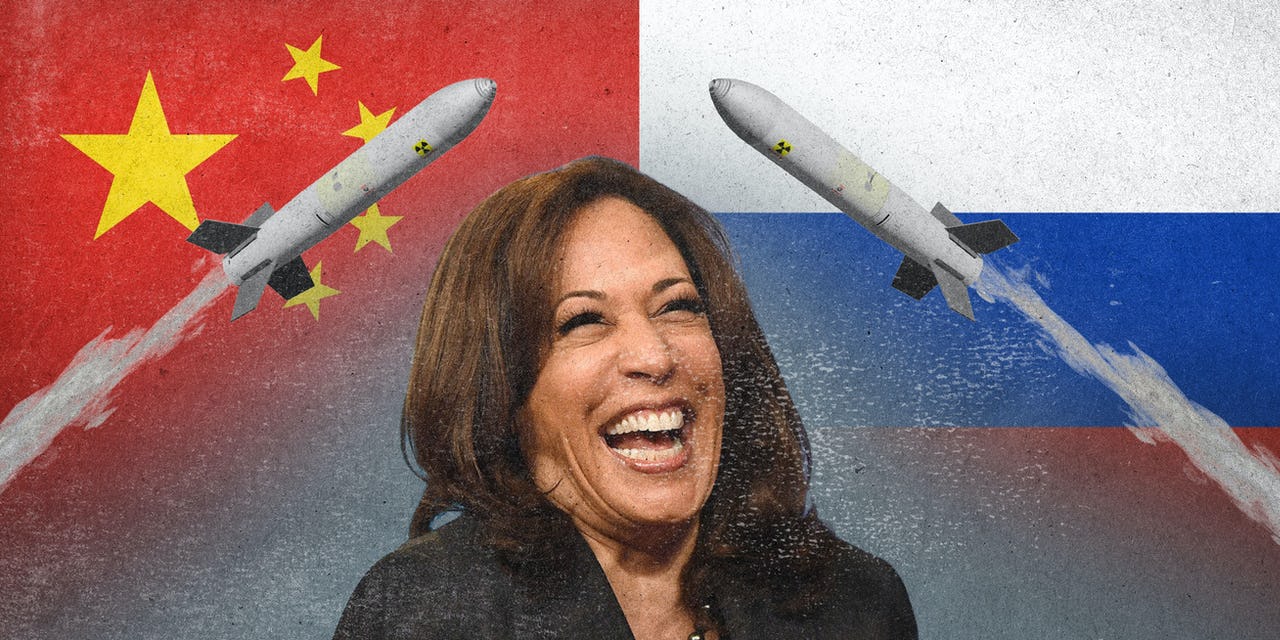 After Chinese and Russia missile tests, Harris claims we must “tackle the climate crisis.”

Joe Biden finally found something for Kamala Harris to do in order to bolster the appearance that she has some competence.

You may not have heard much about the National Space Council meeting this week. The resignation of Symone Sanders, Harris’s spokesperson and top adviser, received more coverage. She will follow another of Harris’s socialist Democrat staffers, communications director Ashley Etienne, out the door by the end of the year.

There has been speculation, given the fact that Kamala’s public approval ratings are actually lower than Biden’s, that Demos would dump her in the 2024 primary (if not sooner) and promote Biden’s totally inept secretary of transportation, Pete Buttigieg. As you recall, Mayor Pete took two months of “maternity leave” at the end of the summer so he and his “husband” could spend time with their two infant adoptees — amid the collapsing supply chain, which has now hobbled our economy and spurred surging consumer product inflation.

With Donald Trump out of the way, and certain that Biden’s socialist regime will bow to the ChiCom global agenda of military and economic dominance, in late October dictator Xi Jinping “tested” a hypersonic missile, ostensibly to the surprise of our military establishment. That prompted Joint Chiefs Chairman Mark Milley, who has aptly demonstrated his incompetence by leading Biden’s Afghanistan surrender, to conclude: “What we saw was a very significant event of a test of a hypersonic weapon system. And it is very concerning.” JCS Vice Chairman Gen. John Hyten remarked that it “looks like a first-use weapon,” adding, “It went around the world, dropped off a hypersonic glide vehicle that glided all the way back to China, that impacted a target in China.”

Then, days before Harris’s Space Council confab, Russian dictator Vladimir Putin, whose expansionist agenda is also no longer contained by Trump as demonstrated by his military buildup along the border with Ukraine, “tested” his sea-based hypersonic missile system.

Space Force Gen. David Thompson declared the obvious: “The threats are really growing and expanding every single day, and it’s really an evolution of activity that’s been happening for a long time. We’re really at a point now where there’s a whole host of ways that our space systems can be threatened. They’re catching up quickly.” Indeed, these systems have been under development, but only Biden’s most sycophantic Kool-Aid drinkers believe either Xi or Putin would have fired these shots with Trump in office.

So, what is Kamala’s Space Council agenda to counter these threats, especially given Americans’ declining confidence in our military under Biden?

Well, after the meeting concluded, it was clear she is focused on countering the so-called “climate change” threat, as noted in the Biden administration’s Space Priorities Framework.

According to Harris, her priority is to establish “a baseline of available space data and decision-making tools that are needed to tackle the climate crisis.” She added, “Today, this council will commit to make this data more accessible to more people, and we will expand our global partnerships to increase the data we are able to collect.”

Of course, she paid lip service to the Chinese and Russian missile tests, but did not mention the impact an exchange of nuclear weapons would have on climate change.

Over the last four decades, I have kept an eye on space-based threats to national security. My interest in those threats was seeded in the 1980s, when I had a small role with President Ronald Reagan’s Strategic Defense Initiative under the umbrella of retired Lt. Gen. Danny Graham’s High Frontier organization. That role was evaluating the political motives of some who were opposed to SDI. Without going into the complex strategic national security issues related to the Mutual Assured Destruction (MAD) doctrine, suffice it to say that, despite the fact Bill Clinton scuttled the development of Global Protection Against Limited Strikes (GPALS) architecture, most of our nation’s current operational missile defense systems are the result of the GPALS concept.

Notably, there are strong parallels to some of the political opposition to SDI back then, when Biden was a senator, and Biden’s policy of appeasement with China and Russia today. Then, the leftists’ agenda was to ensure that the Russian and Chinese communists could catch up to our own capabilities. Based on Biden’s spineless response to the most recent missile tests, that has not changed.

After her Space Council meeting concluded, Harris and Buttigieg left DC for a tag-team “we are relevant” tour promoting Biden’s “Bilk Back Better” spending boondoggle — insisting that the solution to all our national problems is bigger government.

Spoiler alert: In the timeless words of President Reagan, “Government is not the solution to our problem, government is the problem.”

By  MARK ALEXANDER  December 3, 2021 After Chinese and Russia missile tests, Harris claims we must “tackle the climate crisis.” Joe Biden finally found something for Kamala Harris to do in order to bolster the appearance that she has some competence. You may not have heard much about the National Space Council meeting this week. The resignation of Symone Sanders, Harris’s…

By  MARK ALEXANDER  December 3, 2021 After Chinese and Russia missile tests, Harris claims we must “tackle the climate crisis.” Joe Biden finally found something for Kamala Harris to do in order to bolster the appearance that she has some competence. You may not have heard much about the National Space Council meeting this week. The resignation of Symone Sanders, Harris’s…