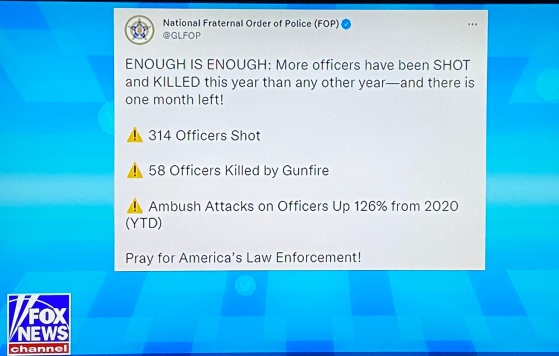 “The Purge” is a Real-Life Movie Already In-Progress

One month to go in 2021. These stats will increase.

I have said in the not too distant past that the road our society is on right now the ridiculous concept of Hollywood’s movie franchise, “The Purge” would at some point and in some manner be officially implemented. At this point in our nation’s outrageous and unacceptable increasing crime rates on every level, lack of respect for laws and for law and order authority, and obliterated regard for life, property, and liberty “The Purge” is already unfolding. And if you think there will be some even playing field in that crawl into dystopia, think again and ask the McCloskeys … ask Kyle Rittenhouse. Their struggles for proper justice in the growing politicizing of our judicial system in their personal cases of legal gun ownership and self-defense and property rights will eventually dissolve for anyone facing the same legal cases in the not too distant future. Ask the McCloskeys and most recently Rittenhouse how even though you’ve won you case in a court of law you are forever eternally guilty in the rabid fringe quarter of ‘the court of public opinion’ who demand mob justice and cancellation and ruination for the rest of your life. Oh, and ask those being held and rotting in DC jails for well-over 10 months since January 6 without hearings or trials or formal charges, compared to the antifa and blm scum that have carried out violence, murder, and destruction in the nation’s cities, barely, if at all, challenged by authorities and elected officials. And ask the tax-paying parents showing up at their children’s school board meetings to oppose warped leftist classroom curriculum who now have the nation’s AG/DOJ/FBI designating them “domestic terrorists”. Hell, you’re considered a domestic terrorist if you dare oppose anything or anyone the left supporters.

And now “defund the police” is moving into “abolish the police” as they are literally being targeted and executed. I don’t know about you but I’m beyond sick and tired of turning on FOX News in the morning and hearing yet another police officer, or more, has/have been murdered…

Paul Bedard: Fraternal Order of Police: Most ever police shot and killed in US history

I think I was 15-16 years old when I watched that old classic movie with Jimmy Cagney, “Angels With Dirty Faces”. Organized crime was spinning and growing out of control. But a criminal might be able to evade the death penalty for murdering another civilian … but never for killing a cop. Not today. No, today it’s excused away as the killer “felt threatened” by the law enforcement officer. The law enforcement officer was “racist”. Etc. And now when you’re part of the fascist anarchist movement (yes, funded by wealthy powers that be) you are bailed out of jail by a Vice Presidential candidate and an army of ‘personal bodyguarded’ celebrities … AND then excused and the exit door held open for you by leftist activist judges/DAs/prosecutors, also typically heavily funded and campaigned for by George Soros and other wealthy anti-American thugs. Do these Sith Lords know the next phase is “eat the rich”?

Protestors shouting “eat the rich,” down a street full of mansions in Beverly Hills! #Eattherich pic.twitter.com/WUvnNtrH8G

And the interloping and funding is coming from outside forces too…

The left in the elected class and the corporate media complex love to pop-off, “This is not who we are”. Seriously?!? What I just laid out above only scratches the surface of my legit declaration of, “This is not who we are!” or are supposed to be in a representative Constitutional republic. This indeed is not “what democracy looks like.” Not unless we are a Cuba or China or Venezuela “democracy.” And that is exactly what the left in our country wants for us.

In addition, I can’t tell you how many raw videos on social media I’ve seen of one or more attacker(s) brutalizing a person, especially on a busy street or on mass transit, and everyone else just standing around and doing nothing.

I guess “LET’S ROLL!” is dead in America.

Dystopia is Just Around the Corner:

As San Francisco approached the critical December shopping month, instead of holiday lights and Santa Claus decorations, dozens of downtown retailers greeted shoppers with plywood-encased storefronts and armed guards in the wake of mass retail thefts in Union Square two weeks ago.

Around a half-dozen stores in the Union Square area were boarded up on Tuesday, including the Louis Vuitton store and others that sustained damage during the robberies. Other luxury stores such as Gucci, which Mayor London Breed said had an existing security gate system and wasn’t damaged in previous robberies, had a guard outside as well.

It’s a stark contrast from previous years when December in Union Square was marked by windows full of holiday ornamentation and the seasonal enticement of products that could fit under Christmas trees.

San Francisco morphed into Detroit so slowly, I hardly even noticed.

HOW THE LEFT’S LOVE OF RIOTS LED TO KYLE RITTENHOUSE: When You Condone Chaos, You Condone the Consequences of Chaos.

Well, look: chaos is chaotic. Bad shit happens when people riot. When you create environments where anything can happen… anything can happen. Some people are going to take advantage of that opportunity to do things that you don’t like. You can’t endorse spasms of directionless violence and then complain when some of it plays out in a way that you hadn’t intended. This seems totally obvious to me, and yet so many out there want to both condone riots and condemn their chaotic outcomes. It’s like putting on music and getting mad when people dance.

Plus: “The left-liberal stance towards political violence, at present, is beyond confused. . . . For many posers on the left antifa is less the expression of authentic political strategy and more a tool to define oneself as an aesthetic radical. If you go to various protests and riots and encounter the self-defined antifascists there, I can assure you very few of them will be remotely interested about what happens in the courts at all. Because – and I’m sorry to break this to you romantic types – most people who self-select as antifa in 2021 are just bored white people attracted by the possibility of an excuse for mindless violence.”

It’s all part of the master plan…

And they are a bloodthirsty cult…

December 2, 2021 in From the editors One month to go in 2021. These stats will increase. I have said in the not too distant past that the road our society is on right now the ridiculous concept of Hollywood’s movie franchise, “The Purge” would at some point and in some manner be officially implemented. At this point in…

December 2, 2021 in From the editors One month to go in 2021. These stats will increase. I have said in the not too distant past that the road our society is on right now the ridiculous concept of Hollywood’s movie franchise, “The Purge” would at some point and in some manner be officially implemented. At this point in…